Crazy Horse killed - Sep 05, 1877. Also on this day Lead Story On this day in 1836, Sam Houston is elected as president of the Republic of Texas, which earned its independence from Mexico in a successful military rebellion. 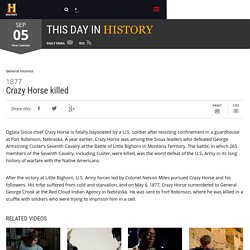 Born in Virginia in 1793, Houston moved with his family to rural Tennessee after his father’s death; as a teenager, he ran away and... American Revolution On this day in 1774, in response to the British Parliament’s enactment of the Coercive Acts in the American colonies, the first session of the Continental Congress convenes at Carpenter’s Hall in Philadelphia. Automotive On September 5, 1957, New York Times writer Gilbert Millstein gives a rave review to “On the Road,” the second novel (hardly anyone had read the first) by a 35-year-old Columbia dropout named Jack Kerouac. Civil War Cold War Boris Pasternak’s romantic novel, Dr. Crime Disaster Firefighters in London begin blowing up homes in a desperate attempt to halt the spread of a great fire through the city on this day in 1666. General Interest Literary. Annotated Bibliography - Crazy Horse: The Native American Life Of Rights &amp; Responsibilities. Native History: Crazy Horse Killed by U.S. Soldier While in Custody - Indian Country Media Network.

This Date in Native History: On September 5, 1877, Crazy Horse, an Oglala Sioux Indian chief who resisted removal efforts, was killed at Fort Robinson by a soldier's bayonet. 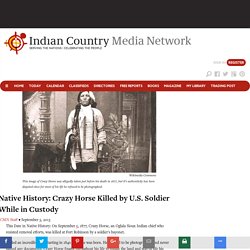 He led an incredible life, starting in 1840 when he was born. He refused to be photographed and never signed any documents. Crazy Horse fought throughout his life to regain the land and way of life his Lakota people had known when he was a child, when they had the full Great Plains to themselves. Crazy Horse - Biography in Context. 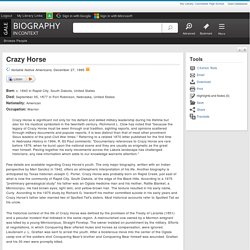 The only major biography, written with an Indian perspective by Mari Sandoz in 1942, offers an atmospheric interpretation of his life. Another biography is anticipated by Texas historian Joseph C. Porter. Crazy House: The Strange Man of the Oglalas. Mari Sandoz tells us Crazy Horse was born in or around the year 1842 to Sioux parents on Rapid Creek, in an area called the Black Hills, or Paha Sapa. 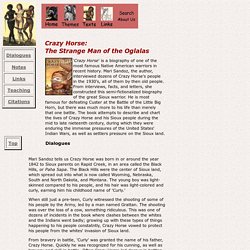 The Black Hills were the center of Sioux land, which spread out into what is now called Wyoming, Nebraska, South and North Dakota, and Montana. The young boy was light-skinned compared to his people, and his hair was light-colored and curly, earning him his childhood name of 'Curly.' Encyclopedia of the Great Plains. "A sketch of Crazy Horse believed to be accurate. 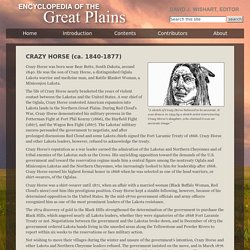 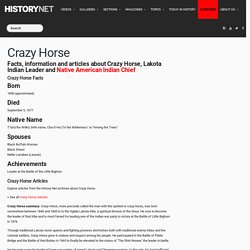 Hayden On the afternoon of September 9, 1876, 600 to 800 Lakota warriors led by Oglala leader Crazy Horse rode to the crests of some hills overlooking a broad depression near the Slim Buttes range of western Dakota Territory. What they saw below must have turned their stomachs. The village of Minneconjou Lakota leader American Horse lay in ruin. Most of the 40 lodges had been demolished, with dead ponies and personal belongings scattered about. Crazy Horse and his warriors had been called from their village some 10 miles away. From their positions atop the hills, Crazy Horse’s warriors opened fire on the troops. Crazy Horse Monument - Memorials and Sculptures near Rapid City, SD. About Crazy Horse Born in 1840 along Rapid Creek, Crazy Horse rose to become one of the most powerful Lakota Indians, second only to Sitting Bull. 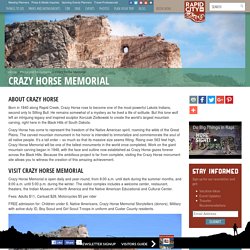 He remains somewhat of a mystery as he lived a life of solitude. But this lone wolf left an intriguing legacy and inspired sculptor Korczak Ziolkowski to create the world’s largest mountain carving, right here in the Black Hills of South Dakota. Crazy Horse - Warrior, Military Leader, Folk Hero. Crazy Horse was an Oglala Sioux Indian chief who fought against removal to an Indian reservation. 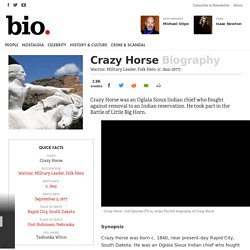 He took part in the Battle of Little Big Horn. Synopsis Crazy Horse was born c. 1840, near present-day Rapid City, South Dakota. He was an Oglala Sioux Indian chief who fought against removal to a reservation in the Black Hills. In 1876 he joined with Cheyenne forces in a surprise attack against Gen. Early Years. PBS - THE WEST - Crazy Horse. Tashunca-uitco (1849-1877) Celebrated for his ferocity in battle, Crazy Horse was recognized among his own people as a visionary leader committed to preserving the traditions and values of the Lakota way of life. 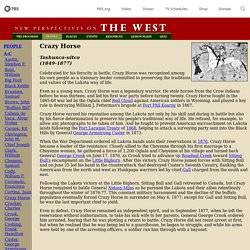 Even as a young man, Crazy Horse was a legendary warrior. He stole horses from the Crow Indians before he was thirteen, and led his first war party before turning twenty. Crazy Horse fought in the 1865-68 war led by the Oglala chief Red Cloud against American settlers in Wyoming, and played a key role in destroying William J. Fetterman's brigade at Fort Phil Kearny in 1867. Crazy Horse - Native American History. Since his violent and controversial death, Crazy Horse, or Tashunka Witko, has become almost a mythical figure of the Great Plains Indian wars. 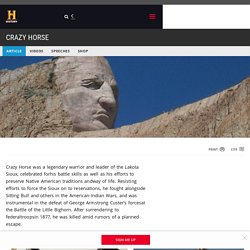 The place and date of his birth are uncertain, but he was probably born in the early 1840s near Bear Butte on the Belle Fourche River in South Dakota. His father was a medicine man of the Oglala subtribe, his mother a Brulé. There has been much speculation about the origin of the name Crazy Horse, but most historians now agree that his father had the same name. As a youth he was known as Curly, but acquired the father’s name after proving himself in combat. He was below average height, his body lithe, his hair and complexion lighter than that of most Indians. His first encounter with U.S. soldiers was on the old Oregon Trail, July 25, 1865, at Platte Bridge, where he acted as a decoy to draw soldiers out of their defenses. Other military forces pursued the Indians, eventually driving Sitting Bull into Canada.