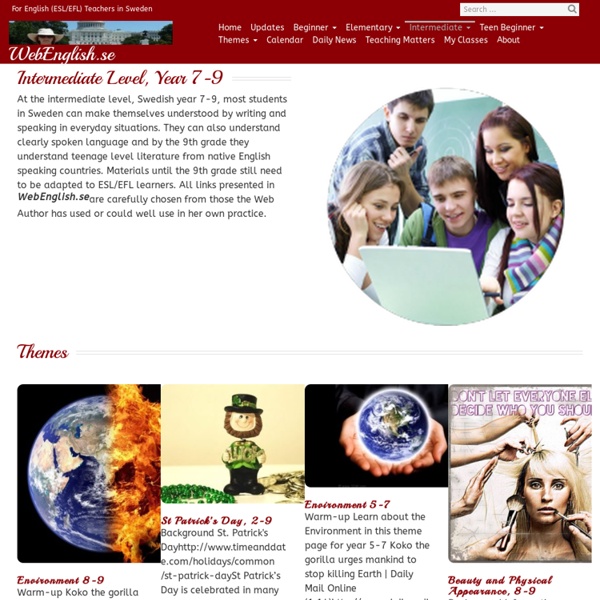 Shall I compare thee to a summer's day? (Sonnet 18) read poems by this poet William Shakespeare was born on April 23, 1564, in Stratford-on-Avon. The son of John Shakespeare and Mary Arden, he was probably educated at the King Edward VI Grammar School in Stratford, where he learned Latin and a little Greek and read the Roman dramatists. At eighteen, he married Anne Hathaway, a woman seven or eight years his senior. Sounds: The Pronunciation App Practise, practise, practise! Work how you want to work – practise listening, reading, speaking and writing. Vocabulary Wordlists Look up and listen to over 650 words in the Wordlist, then record and compare your own pronunciation. Interactive phonemic chart Tap on a symbol to hear the sound, or tap and hold to hear an example word.

Re-imagining the grammar classics: The personalized gap fill This is the first in a series of blog posts in which I’ll present a range of activities that can be used in class with minimal – or even no – preparation at all. Most of these activities revolve around reviewing or extending grammar structures, and as such are designed to be as flexible as possible and thus usable in many different situations. First up we look at a way of personalizing gap fill exercises so that they work in a more meaningful and motivational way in your language class. The personalized gap fill Gap fills are probably the most common type of exercise in the language classroom. Nevertheless, they are also the most boring and uninspiring. How to use songs in the English language classroom What makes for a successful song-based lesson? Adam Simpson, second-time winner of the British Council’s Teaching English blog award for his post on conditionals (written with Paul Mains), explains. One of the big problems we all face, whether teaching English to children or adults, is maintaining learners’ interest throughout our lessons.

Romeo and Juliet: Plot Overview In the streets of Verona another brawl breaks out between the servants of the feuding noble families of Capulet and Montague. Benvolio, a Montague, tries to stop the fighting, but is himself embroiled when the rash Capulet, Tybalt, arrives on the scene. After citizens outraged by the constant violence beat back the warring factions, Prince Escalus, the ruler of Verona, attempts to prevent any further conflicts between the families by decreeing death for any individual who disturbs the peace in the future. Romeo, the son of Montague, runs into his cousin Benvolio, who had earlier seen Romeo moping in a grove of sycamores. Giving Opinions Four Corners ESL/EFL Speaking Activity - Pre-intermediate - 25 Minutes In this fun class activity, students practice expressing and defending their opinions. The teacher places a different sign (Strongly Agree, Agree, Disagree, and Strongly Disagree) in each corner of the classroom.

ESL Games and Game Board The ESL game boards found on this page are in the form of Microsoft Word documents. It may take a few second to open. Just click, print, and photocopy. A great motivating TEFL activity. Word Skills: Review synonyms, antonyms, beginning sounds, ending sounds, middle sounds, and rhymes.