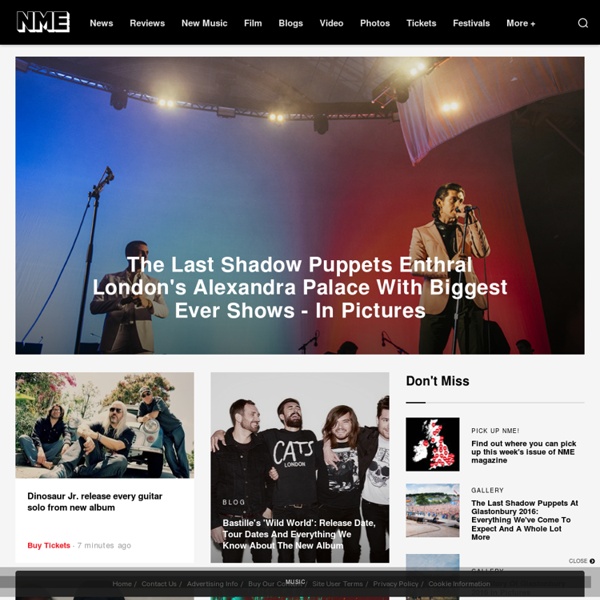 10 Essential Albums for Starting a Jazz Collection If I’ve seen it once I’ve seen it a hundred times. Someone just getting into jazz ventures online looking for some music to start with, and is instantly inundated with about 500 different choices. Everyone has their own ideas about the best places to start a jazz music collection, and it can get overwhelming pretty quickly. 33 Movies To Watch When You're Sad, Glum Or Bummed Out We all have days that don’t feel quite right. Maybe you’re bored, sick or lethargic. Perhaps you just got some bad news that has left you feeling slack-jawed & useless. Maybe you’re worried about your sister, or fighting with your husband. Perhaps it’s just raining outside, like it is here today!

Buy Various - 101 Indie Classics (5CD Average rating (2 reviews) I am really glad i bought this album, the mix of songs is fantastic, and i would recommend this album to any indie fan, in my opinion this is a stroke of genius. What a fantastic album!!!!! Am dead chuffed with this album, it has filled in a lot of holes in my music collection.Indie compilations tend to be hit and miss but this one is about 95% great songs. Rakuten’s Play.com is an online trading platform which enables third party sellers and buyers to negotiate and complete transactions via its Website. Rakuten’s Play.com is neither the buyer nor the seller of any items sold via its Website. 10 Songs You Need In Your Life This Week 1. We have a lot of feelings about Kanye West's new album. There's a lot to love, and there's a lot we still have to digest.

How to improvise great solos on a guitar Before I go straight on to scales, I am going to tell you about how to get the right notes to fit a particular chord, and also the circle of 5ths. If you know these, skip to step 2. Generally, The songs you will improvise too will follow a widely used chord progression pattern, which should stay the same for most of the tune or just for a section (chorus, verse, bridge etc.)I am going to give you notes that will fit into the particular chords. This will work with MOST styles of music, but not for others. 30 Albums That Define Cool Any album “list” is going to be incomplete. It’s going to be filled with albums you agree with, artists you hate and some sort of commentary that you probably disagree with. This list is no different. However, rather than ranking these in order of importance or influence, we decided to pick 30 Albums that Define Cool. It’s not a “Best of XXXX” list by any stretch of the imagination (because honestly, that would be presumptuous), just thirty albums that we think are cool.

Experimental Ahh. The time is finally here. All winter long we’ve been angrily looking at the calendar, not-so-patiently awaiting the start of festival season here in the states. 9 All-Female DJ Collectives You Need To Know Right Now In the past year, conversations regarding female representation in dance music have been more passionate than ever. It's about time. But importantly, this new wave of discourse is bringing with it a new wave of projects designed to highlight the women behind the decks. Top 10 Free Ways To Discover New Music Online - StumbleUpon Bored with your music and want to discover some new bands or singers? There are two main ways you can do that online. You can use services which create music maps, allowing you to explore artists similar in genre to the artists you already listen to. Or you can use music blogs and websites that showcase independent or up-and-coming artists, whether the music is being reviewed, or posted by the musicians themselves. Some of these websites have a community built around them, which gives fans the opportunity to interact directly with these new talents. Here is a list of 10 free sites to discover new music.

Six Live Electronic Music Albums That Are Better Than Being There Photo by Camille Blake At the tail end of October, Autechre fans were treated to an unprecedented bounty: AE_LIVE, a concert album comprising not one but four live sets from the duo—Krakow, Brussels, Utrecht, and Dublin—all recorded late last year. Then, in December, five more from 2015 (Krems, Nagano, Grafenhainichen, Dour, Katowice) became available. It's a lot to process, but then, for Autechre fans, bewilderment just kind of comes with the territory.