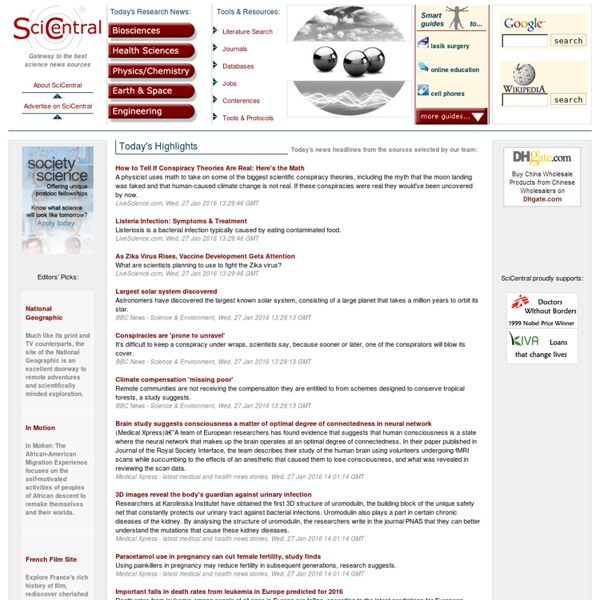 Public Domain Review In this section of the site we bring you curated collections of images, books, audio and film, shining a light on curiosities and wonders from a wide range of online archives. With a leaning toward the surprising, the strange, and the beautiful, we hope to provide an ever-growing cabinet of curiosities for the digital age, a kind of hyperlinked Wunderkammer – an archive of materials which truly celebrates the breadth and variety of our shared cultural commons and the minds that have made it. Some of our most popular posts include visions of the future from late 19th century France, a dictionary of Victorian slang and a film showing the very talented “hand-farting” farmer of Michigan. With each post including links back to the original source we encourage you to explore these wonderful online sources for yourself. Check out our Sources page to see where we find the content.

Accelerating Future There isn’t enough in the world. Not enough wealth to go around, not enough space in cities, not enough medicine, not enough intelligence or wisdom. Not enough genuine fun or excitement. Electric Weather The following excerpts come from a report that appeared in the Institute of Electrical and Electronics Engineers (IEEE) magazine, SPECTRUM, for April. The report demonstrates that when science has lost its way, engineers must use their intuition to make progress. Electric Rainmaking Technology Gets Mexico’s BlessingBut for now, doubters prevail north of the border.From at least the early 1940′s to the end of the 20th century, it always rained more in the state of Jalisco, in central Mexico, than in its neighbor Aguascalientes.

OAIster Access to OAIster A freely accessible site for searching only OAIster records is available at Additionally, OAIster records are fully accessible through WorldCat.org, and appear as WorldCat.org search results along with records from thousands of libraries worldwide. The OAIster database is searchable on the OCLC FirstSearch service, providing another valuable access point for this rich database and a complement to other FirstSearch databases. Contributing to OAIster The OAIster database is included in WorldCat and metadata harvesting goes through the WorldCat Digital Collection Gateway.

PLoS Biology : Publishing science, accelerating research A Peer-Reviewed, Open Access Journal Current Issue PLOS Biology is a peer-reviewed, open-access journal featuring research articles of exceptional significance in all areas of biological science, from molecules to ecosystems. Matrix mechanics Matrix mechanics is a formulation of quantum mechanics created by Werner Heisenberg, Max Born, and Pascual Jordan in 1925. Matrix mechanics was the first conceptually autonomous and logically consistent formulation of quantum mechanics. It extended the Bohr Model by describing how the quantum jumps occur. It did so by interpreting the physical properties of particles as matrices that evolve in time.

100 Best Science Documentaries Online No matter how much you know, there is always something new to learn about science. While your college courses may cover the basics, you can get a more in-depth look at a wide variety of topics from Internet resources such as these great documentaries. These selections will help you explore everything from the inner reaches of the human mind to the outer areas of our universe and just about everything else in between.

Digital Library Of The Commons Digital Library of the Commons hidden Image DatabaseExport Citations Public Library of Science: Open Access The Case for Open Access Open Access (OA) stands for unrestricted access and unrestricted reuse. Here’s why that matters. Most publishers own the rights to the articles in their journals. Anyone who wants to read the articles must pay to access them. Anyone who wants to use the articles in any way must obtain permission from the publisher and is often required to pay an additional fee.

Discover Magazine dark matter Your hands are, roughly speaking, 360 million years old. Before then, they were fins, which your fishy ancestors used to swim through oceans and rivers. Once those fins sprouted digits, they could propel your salamander-like ancestors across dry land. Fast forward 300 million years, and your hands had become fine-tuned for manipulations: your lemur-like ancestors used them to grab leaves and open up fruits. Within the past few million years, your hominin ancestors had fairly human hands, which they used to fashion tools for digging up tubers, butchering carcasses, and laying the groundwork for our global dominance today. We know a fair amount about the transition from fins to hands thanks to the moderately mad obsession of paleontologists, who venture to inhospitable places around the Arctic where the best fossils from that period of our evolution are buried.

5 TED Talks on Science That Will Blow Your Mind Andrew Maynard is a scientist and emerging technology adviser. He blogs at 2020 Science and tweets as @2020science. Some of the most entertaining, informative and mind-blowing science videos on the web come from TED – the Technology, Entertainment, Design conference. Challenged to give the “talk of their lives,” the world’s top scientists and science communicators have been dazzling audiences – many of whom are thought leaders, trend-setters and entertainers - for years now. Most of the best talks are now freely available on the internet, but sifting through hundreds of video clips to find the real gems can be hard going. The Collection of Computer Science Bibliographies About the Collection This is a collection of bibliographies of scientific literature in computer science from various sources, covering most aspects of computer science. The bibliographies are updated weekly from their original locations such that you'll always find the most recent versions here.