Can I use IMDb data in my software? 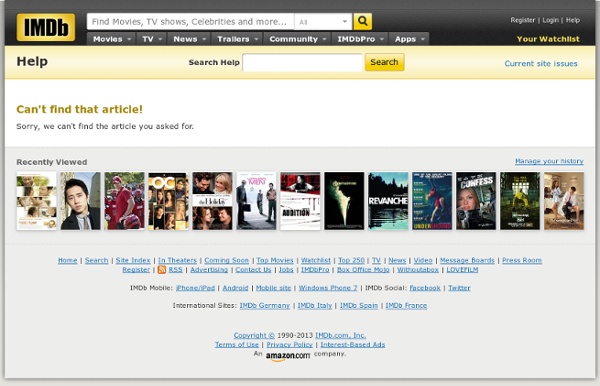 Alternative Interfaces Movie Keyword Analyzer (MoKA) 3D University imdbmoviefetcher pkgbuild and post.install using your @webofunni @marxav works no matter the users path if you just use `which binary` like so: declare -rx LYNX=`which lynx` declare -rx CAT=`which cat` declare -rx SED=`which sed` declare -rx EGREP=`which egrep` declare -rx GREP=`which grep` declare -rx UNIQ=`which uniq` declare -rx HEAD=`which head` declare -rx SORT=`which sort` this is the first I changed. webofunni does share the source on github(many thanks) you can always fork and do what you like. I also think you should just have the pkgbuild build from your git repo. declare -rx EGREP="/usr/bin/egrep" declare -rx GREP="/usr/bin/grep" Of course it's always good to have an actual release number of one's application, which should change after an upgrade. army, Thanks for that. Please always change the pkgrel value with updates. Thanks Army, I uploaded the new PKGBUILD :-) hey army, that pastebin link is not working.

On This Day Golem: inside the weird and wonderful new production from theatre group 1927 It is almost impossible to impart in words the magic of a 1927 show. A thrilling combination of animation, live performance, theatre and music, it is multimedia in the true sense of the word, but with none of the slightly clinical nuance that word implies. The shows are dark and fruity, wildly inventive, fiendishly skilled and with a great sense of joy and purity. The staging harks back to the silent-film era (hence the name – 1927 was the year that the talkies were introduced) and draws on a multitude of inspirations. The writing is superb, droll and poetic, and the animation is a character in itself, not just a projected backdrop; actors pop up through windows in the screens, and there is live music in the form of piano and drums. 1927’s unique quality is its immaculate synchronisation – everything is minutely integrated. Aligning the actors and the animations is an intricate process, requiring hours of complex technical rehearsals. ‘It’s a tail,’ Barritt says.

Withoutabox Contributor Zone This Web App Easily Turns Your Selfies Into 3D Models Taking a 2D photo and turning it into a 3D model is something that many users getting started in 3D printing are interested in doing. Sometimes a straight-on shot can help you get basic dimensions, but really transitioning it into a 3D model can be very difficult. Now, Smoothie-3D is trying to make this process easier with their free online modeling tool. Smoothie-3D is a completely browser-based 3D modeling platform that incorporates several features that are often difficult to do in other programs. Their demo video of modeling a squirrel is instantly impressive: The site requires a free registration to use, and I was pleased to discover that the squirrel model was available as a free demo to all new users. Do you frequently run into a 3D modeling problem, and need to find a tool to solve it? Matt Stultz Matt is a community organizer and founder of both 3D Printing Providence and HackPittsburgh. Related

IMDB::Film IMDB::Film - OO Perl interface to the movies database IMDB. IMDB::Film is an object-oriented interface to the IMDB. You can use that module to retrieve information about film: title, year, plot etc. year Define a movie's year. my $imdbObj = new IMDB::Film(crit => 'Jack', year => 2003); print "Got #" . proxy defines proxy server name and port: proxy => ' By default object tries to get proxy from environment debug switches on debug mode to display useful debug messages. cache indicates use cache or not to store retrieved page content. cache_root specifies a directory to store cache data. cache_exp specifies an expiration time for cache. clear_cache indicates clear cached data before get request to IMDB.com or not timeout specifies a timeout for HTTP connection in seconds (10 sec by default) user_agent specifies an user agent for request ('Mozilla/5.0' by default) full_plot_url specifies a full plot url for specified movie host specifies a host name for IMDB site. query search kind()