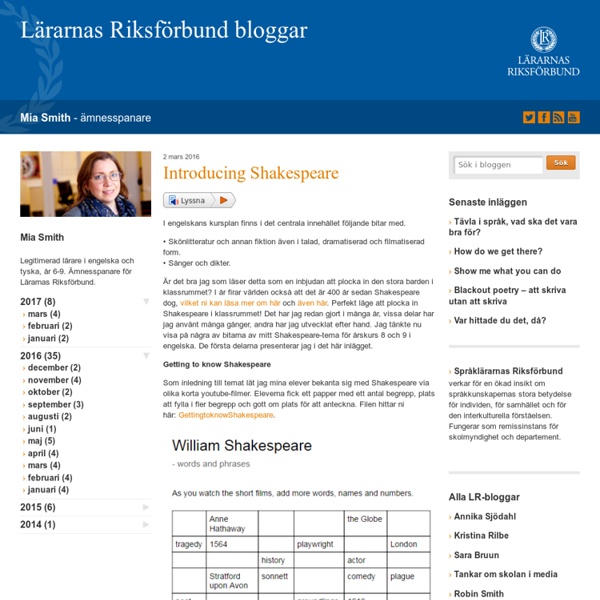 Fly Through 17th Century London M@ Fly Through 17th Century London A group of students at De Montfort University created this fly-through of 17th century London (skip to 0:50 in the video to get to the juicy stuff). The model focuses on the area around Pudding Lane and the bakery of Thomas Farriner, where the Great Fire of 1666 started. Although most of the buildings are conjectural, the students used a realistic street pattern and even included the hanging signs of genuine inns and businesses mentioned in Samuel Pepys' diary. More information on the source material and processes can be found on the team's blog. The project is an entry in the Off The Map competition, in which students were invited to build 3-D digital models based on maps at the British Library, and using software by Crytek.

A few discussion activities for English language students What discussion activities work in class? Tekhnologic, winner of the British Council’s Teaching English blog award for a post on setting discussion goals, shares a few ideas. A discussion can bring out your students’ interests and motivate them; it’s a chance for them to talk about the things they really care about. Giving and justifying opinions in English can also bring students a sense of accomplishment, as they are using the language to express complex ideas. Discussion activities encourage critical thinking, and are therefore excellent preparation for speaking tests, such as IELTS or TOEFL, which partly examine the ability to express and justify opinions in English.

US Presidential Election ⋆ Intermediate, Themes Background 2016 presidential candidates Basic details of each candidate’s backgroundWhere the Candidates Stand on 2016’s Biggest IssuesWhat happens when … and how The important dates, Feb-Nov, listed and explained2016 Primary Results and Calendar Quickview of the results so far by NYTimes Warm-up What do kids want in a president? (1:20) Kids talk about what kind of person they think the next president should be like.“Slow Jam the News” with President Obama (7:05) Jimmy Fallon and President Obama slow jam the news, discussing Obama’s legacy, accomplishments and thoughts on the 2016 election.44 Presidents A rap song made after Obama became presidentCouch Commander (4:45) What will Obama do after his presidency?

Shakespeare Solos: watch the first six films Adrian Lester, Hamlet ‘To be or not to be’ Adrian Lester performs Hamlet’s soliloquy from act III, scene 1, in which the prince reflects on mortality and considers taking his own life. The Coop Times All stories written in this game are automatically published to The Coop Times newspaper - read them here. By Adam Carr - @2HitAdam with special thanks to Omeed Dariani, Jola Pez and Matt Carr for submitting extra prompts! Music "Big Fish" and "Full Hand" by playonloop.com CC BY 3.0 If you've enjoyed my game and it's within your means, please consider giving back <3 I'm near broke at the moment, and donations help me keep making these games!

How to Become President of the U.S. Poster Download or order a poster. (Please get your parent's permission) Lesson PlanVideos: The Requirements, Primaries and Caucuses, Conventions to Election, How Votes Are Counted, How to Become President U.S. Constitution's Requirements for a Presidential Candidate At least 35 years oldA natural born citizen of the United StatesA resident of the United States for 14 years Step 1: Primaries and Caucuses Who was William Shakespeare? William Shakespeare is known across the world as the writer of plays such as Romeo and Juliet and Hamlet, and as one of the most famous British people ever. Sometimes known simply as ‘the Bard’, he lived over four hundred years ago – not bad for the son of a man who made a living from making gloves. Part of the fascination is that despite being so well-known we don’t actually have much information about him; even his name is spelt differently each time it appears, ranging from ‘Shak-peare’ to ‘Shaksper’. Over the years people have argued long and hard about whether he wrote the plays, although these days he’s generally accepted as the author of about thirty-eight plays, some of which were written in partnership with others.