Start Your Own Magazine. This story first appeared in the June 2006 issue of Entrepreneur. 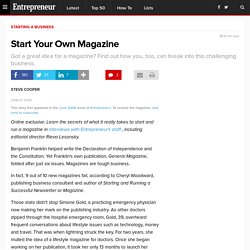 To receive the magazine, click here to subscribe. Online exclusive: Learn the secrets of what it really takes to start and run a magazine in interviews with Entrepreneur's staff , including editorial director Rieva Lesonsky. Benjamin Franklin helped write the Declaration of Independence and the Constitution. Yet Franklin's own publication, General Magazine, folded after just six issues. Magazines are tough business. In fact, 9 out of 10 new magazines fail, according to Cheryl Woodward, publishing business consultant and author of Starting and Running a Successful Newsletter or Magazine.

Those stats didn't stop Simone Gold, a practicing emergency physician now making her mark on the publishing industry. Gold isn't alone. Why Magazines? The survival statistics say "don't do it," but they don't tell the full story. Husni says that of the magazines that fail, 70 percent never make it past their first issue. Finding the Money. 5 tips for launching your own digital magazine. Journalism is dead. 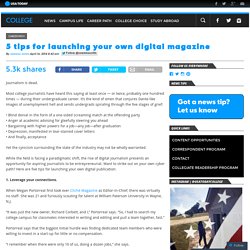 Most college journalists have heard this saying at least once — or twice, probably one hundred times — during their undergraduate career. It’s the kind of omen that conjures Dante-like images of unemployment hell and sends undergrads spiraling through the five stages of grief: • Blind denial in the form of a one-sided screaming match at the offending party • Anger at academic advising for gleefully steering you ahead • Bargaining with higher powers for a job—any job—after graduation • Depression, manifested in tear-stained cover letters • And finally, acceptance Yet the cynicism surrounding the state of the industry may not be wholly warranted.

While the field is facing a paradigmatic shift, the rise of digital journalism presents an opportunity for aspiring journalists to be entrepreneurial. 1. When Megan Portorreal first took over Cliché Magazine as Editor-in-Chief, there was virtually no staff. “It was just the new owner, Richard Corbett, and I,” Portorreal says. Creating and Running a Profitable Online Magazine, Part I - Hongkiat. Digital text is the future of Internet media. 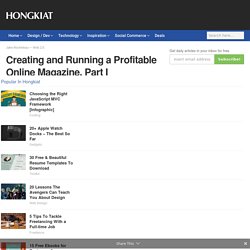 We’re ushering into a new era with furthering technological advancements. Physical magazines today may be gone within the next 5-10 years. Magazines are moving online in a rapid succession. It’s hard to imagine a world where all of our information is stored digitally, yet as we press closer smaller pieces are starting to fall into place. The idea of recycling and saving the green is stronger by day which is the reason why an online magazine makes sense perfectly.

In this 2-part series we’ll be going over some of the best actions to take in launching your own online magazine. It’s going to take some time and a lot of sweat and blood. Align your Cardinal Goals Before you even consider launching a magazine you have to set your goals in order. It can be difficult but sitting down for 10 minutes and create a list of what you’d like to see happen as a result of launching your magazine. Finding images and multimedia for your news project (without breaking copyright laws) Whether you need an image for your blog post, a soundtrack to your video or that YouTube clip for your documentary, if you’re dealing with multimedia it’s likely you’ll end up using – or wanting to use – someone else’s work as part of your own. 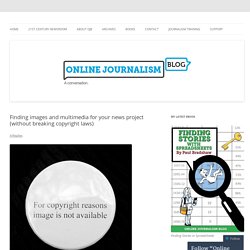 Here are some basic tips on finding and using multimedia across the web in a way that won’t (hopefully) land you in hot water. The public domain myth One of the mistakes that has repeatedly landed journalists and their employers in trouble is confusion over the term “public domain“. But sometimes you will hear journalists talk about something being “in the public domain“, in other words ‘public’. For instance, when the Irish Daily Mail published photos of an air traffic controller from her website, they defended the decision on the grounds that the image was “in the public domain”. 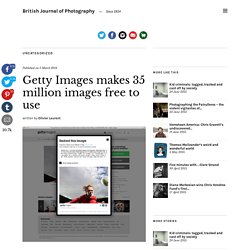 Getty Images has single-handedly redefined the entire photography market with the launch of a new embedding feature that will make more than 35 million images freely available to anyone for non-commercial usage. BJP's Olivier Laurent finds out more The stock agency’s controversial move is set to draw professional photographers’ ire at a time when the stock photography market is already marred by low prices and under attack from new mobile photography players.

Getty Images’ reasoning is that it is the best alternative given that the agency is not strong enough to control how the internet – and, with it, users’ online behaviour – has developed. “We’re really starting to see the extent of online infringement,” says Craig Peters, senior vice president of business development, content and marketing at Getty Images. In the past few years, Getty Images has found its content was “incredibly used” in this manner online, says Peters. Online power Advertising avenue. Stock Photography, Royalty-Free Photos, Video Footage & Music.