Proceedings of the National Academy of Sciences. How OSDD works - Open Source Drug Discovery. OSDD is an open innovation translational research platform for both computational and experimental technologies, where all the projects and the research results are reported on the web based platform SysBorg 2.0 , enabling independent researchers to freely share their work, discuss, and collaborate through the internet. 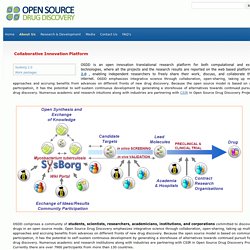 OSDD emphasizes integrative science through collaboration, open-sharing, taking up multifaceted approaches and accruing benefits from advances on different fronts of new drug discovery. Because the open source model is based on community participation, it has the potential to self-sustain continuous development by generating a storehouse of alternatives towards continued pursuit for new drug discovery. Numerous academic and research intuitions along with industries are partnering with CSIR in Open Source Drug Discovery Project.

A CDU campaign poster of Angela Merkel near Alexanderplatz in Berlin. 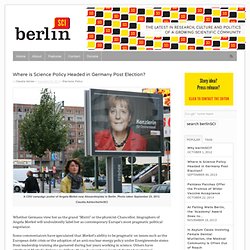 Photo taken September 23, 2013. Claudia Adrien/berlinSCI Whether Germans view her as the grand “Mutti” or the physicist-Chancellor, biographers of Angela Merkel will undoubtedly label her as contemporary Europe’s most pragmatic political negotiator. Some commentators have speculated that Merkel’s ability to be pragmatic on issues such as the European debt crisis or the adoption of an anti-nuclear energy policy under Energiewende stems from leadership training she garnered during her years working in science. Others have attributed Merkel’s diplomacy skills to those she may have learned during her atypical upbringing in the GDR as the daughter of a Protestant pastor. Whatever the biographical speculation, there were high hopes during Merkel’s first term that her background as a scientist would push her to make bold decisions to expand already flourishing German research institutions. 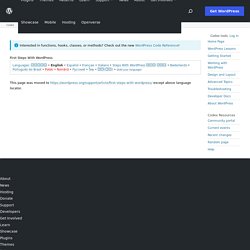 You've just completed the 5 Minute Installation of WordPress or one-click install from your web host. Now what? Let's take a step-by-step tour through your WordPress site and see how the different functions work and how to make your new site your own. During the first part of this tutorial, please don't change anything within the program unless it is part of the tutorial. Log In View Log In Form Begin by logging into the “administration area” or the back end of your website. 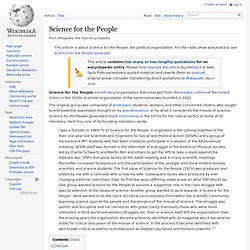 A similar organization of the same name was founded in 2002. The original group was composed of professors, students, workers, and other concerned citizens who sought to end potential oppression brought on by pseudoscience, or by what it considered the misuse of science. SftP Magazine - Tables of Contents. Trusted in Hosting. Engaging Science at Western University. 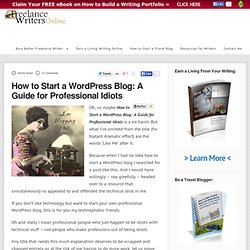 But what I’ve omitted from the title (for blatant dramatic effect) are the words ‘Like Me’ after it. Because when I had no idea how to start a WordPress blog I searched for a post like this. And I would have willingly – nay gleefully – headed over to a resource that simultaneously so appealed to and offended the technical idiot in me.

If you don’t like technology but want to start your own professional WordPress blog, this is for you my technophobic friends. Oh and really I mean professional people who just happen to be idiots with technical stuff – not people who make professions out of being idiots. Any title that needs this much explanation deserves to be scrapped and changed entirely so at the risk of me having to do more work, let us move swiftly on now… How to start a WordPress blog from scratch Step 1: Step 2: Step 3: At the top of the next screen choose a domain name for your website. Step 4: Africa Science News. Ndifuna Ukwazi (Dare to Know ) - Leadership through education and mentorship.