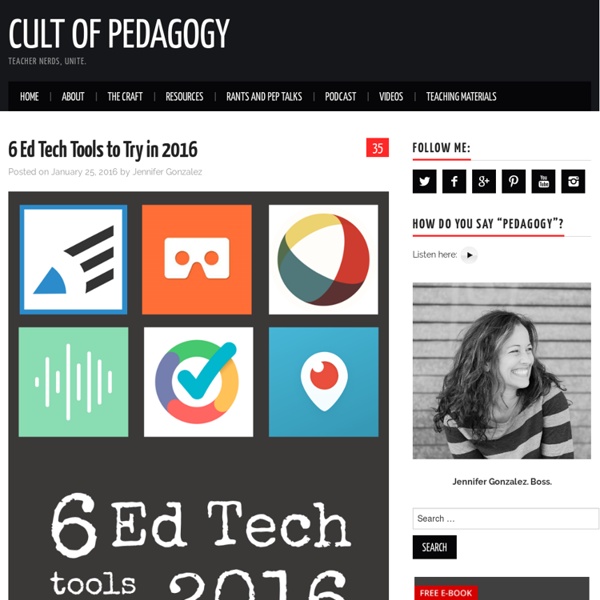 About a year ago, I published an e-book called the Teacher’s Guide to Tech. Over the last month, I have been updating it for 2016, adding over 30 new tools and refreshing the information I had about the original ones. I have to say, the 2015 version was excellent, but now it’s SO MUCH BETTER. (To take a peek at the guide, scroll to the bottom of this post.) In the process, I discovered some tools that I absolutely fell in love with, and I wanted to share them with you here. Each of these tools can make your teaching more efficient and effective, and your students’ learning deeper and more engaging. Let’s take a look. Listen to this post as a podcast: Podcast: Play in new window | Download (Duration: 34:24 — 47.6MB) Subscribe: iTunes | Android | One key to improving student writing is to have students write more often. The free option allows for 40 students and a limited number of posts; paid packages offer greater capacity for students and posts. Here’s a closer look at Write About:

Guide: Creating great content with iBooks Author Traditional textbooks generally contain great content, but they are fraught with problems. They are often very expensive, easily damaged and can only be updated by purchasing any new editions. In addition, for the vast majority of people, publishing a printed book of our own is out of reach, making it difficult to produce your own content. Nowadays, students have grown accustomed to using technology to interact with their world, so why not take advantage of this and produce books that can be tailored to the way they learn? Random Name Picker ABCya is the leader in free educational computer games and mobile apps for kids. The innovation of a grade school teacher, ABCya is an award-winning destination for elementary students that offers hundreds of fun, engaging learning activities. Millions of kids, parents, and teachers visit ABCya.com each month, playing over 1 billion games last year. Apple, The New York Times, USA Today, Parents Magazine and Scholastic, to name just a few, have featured ABCya’s popular educational games.

A Holiday Gift to Teachers: My Top 10 List of Free Educational Technology Tools - Catapult Learning Many educators are intrigued by the use of educational technology in their classrooms and with their students. They want to move past the productivity stage to the point of truly enhancing their own teaching and their students’ learning through educational tools. However, there are so many tools available that many teachers feel overwhelmed. untitled The GNU operating system is a complete free software system, upward-compatible with Unix. GNU stands for “GNU's Not Unix”. Richard Stallman made the Initial Announcement of the GNU Project in September 1983. A longer version called the GNU Manifesto was published in March 1985.

Leoxicon: Be like Bill for grammar (and vocabulary) practice The third person singular of the Present Simple tense is known to be particularly problematic for learners and when the "Be Like Bill" meme took social media by storm last week, I thought that it presents a wonderful opportunity to practise the problematic structure. Background If you don't know Be Like Bill, it works something like this: you see in your feed an image one of your Facebook friends has posted which looks like this. You click on the image and after being redirected to the meme generator, you enter your name and gender, and the app generates a similar nonsensical story about you which always ends with "(Mike / Jane / Leo / Farouk) is smart. Be like (Mike / Jane / Leo / Farouk)"and has a stick figure sporting a bobble hat.

15 - YouTube Capture: Easily Record, Edit, and Upload Video to YouTube Podcast: Play in new window | Download Subscribe: iTunes | Android | EdTech You Should Know – 15 – YouTube Capture If you’re interested in an easy way to capture, edit, and upload video to YouTube from a mobile device you’re going to love YouTube Capture. More about this great app coming up! Today we’re talking about an app that allows mobile device users a simple way to capture, edit, and upload video to YouTube. Google Sheet Interactive Dice! Roll a single or double dice with a keystroke using — wait for it — a Google Spreadsheet!!! Google Sheet Interactive Dice This template is an example of a clever way to start with a Google Spreadsheet, add a few formulas, change a little of the formatting, and end up with something really cool! Note – At some point, I hope to provide video instructions so that students can learn some programming skills while creating their own interactive dice.

21 Things Every 21st Century Teacher Should Do This Year The Past mixing with the Future #selfie A new school year always brings about new ideas and hopeful ambition for teachers. However, it’s almost 2015. Gone are the days when we can use the excuse that “we don’t do technology”. Part of being a teacher in the 21st century is being creative in integrating academics and learning into student’s digital lives. With access to content being ubiquitous and instant in student’s out of school lives, we can either reject their world for our more traditional one, or embrace it. Calculate Linear Regression and Graph Scatter Plot and Line of Best Fit What is simple linear regression? Simple linear regression is a way to describe a relationship between two variables through an equation of a straight line, called line of best fit, that most closely models this relationship. A common form of a linear equation in the two variables x and y isy=mx+b where m and b designate constants. The origin of the name "e;linear"e; comes from the fact that the set of solutions of such an equation forms a straight line in the plane. In this particular equation, the constant m determines the slope or gradient of that line, and the constant term "b" determines the point at which the line crosses the y-axis, otherwise known as the y-intercept. Given any set of n data points in the form (x_i, y_i), according to this method of minimizing the sum of square errors, the line of best fit is obtained whenm\sum_{i=1}^{n} x_i+bn=\sum_{i=1}^{n} y_im\sum_{i=1}^{n} x_i^2+b\sum_{i=1}^{n} x_i=\sum_{i=1}^{n} x_iy_i where the summations are taken over the entire data set.

Stories, Stories, Stories Using photos in EFL Classroom, part 3 We are all stories, right? We tell a new story, the same story, another story all the time and we do it in the class too. Today I’m going to mention activities that can be used to create new stories for the theme “Using Photos in EFL Classes”. You can either ask your students to bring some photos they have taken or you can choose the photos you’ve taken or as usual, go to #ELTpics and tell them to choose the pictures they want to think about and write their stories.

7 of The Best iPad Augmented Reality Apps for Teachers February 9, 2016 The use of augmented reality (AR) technology in education is on the raise. Some speculate that the year 2016 will be an AR year par excellence. The basic premise behind augmented reality is the extension of the physical world to include components of the virtual world. The potential of augmented reality in teaching and learning is huge. 10 Awesome Web Tools Teachers should Be Using Educational Technology and Mobile Learning is back to you with another list of some great educational websites. We have meticulously handpicked this compilation and we want those of you who, because of their time constraints or any other reasons, could not keep up with the sweeping influx of the web tools to have a chance to get to know some useful tools to use both for their professional development and with their students as well. You can also check our archive for other compilations. Have a look at the list below and share with us your feedback 1- Stykz Stykz is a stickfigure animation program that was inspired by the popular Pivot Stickfigure Animator software.

Visuals for Foreign Language Instruction The illustrations were created as part of the Visuals for Developing Communication Skills in Foreign Language Classes project, initated by Paul Toth, former Director of the Less-Commonly-Taught Languages Center. It was funded by the Provost through the Advisory Council on Instructional Excellence (ACIE) as part of the Innovation in Education Awards program, and brought to completion by Paul's successors, Dawn McCormick and David Quinto-Pozos. All of the illustrations were drawn by Alec Sarkas from the Center for Instructional Development & Distance Education (CIDDE). The project was managed by Nick Laudato and Bill Johnston from CIDDE. Search for an image…