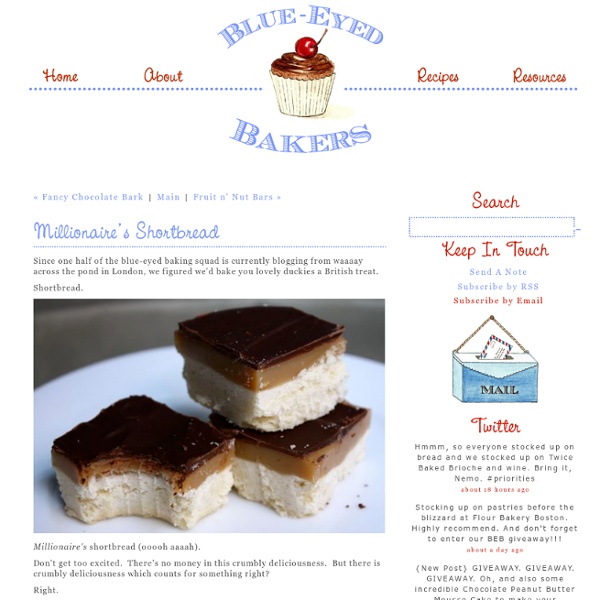 Since one half of the blue-eyed baking squad is currently blogging from waaaay across the pond in London, we figured we'd bake you lovely duckies a British treat. Shortbread. Millionaire's shortbread (ooooh aaaah). Don't get too excited. There's no money in this crumbly deliciousness. But there is crumbly deliciousness which counts for something right? Right. So there's shortbread, which is rather tasty on its own, and v v British. Just go with it. And THEN to transform it into Millionaire's Shortbread (ooooh ahhhh), you slather the aforementioned crumbly deliciousness in caramel and chocolate. We know. It's ok, just go slow, eat some melted chocolate along the way to keep your strength up, and you'll do just fine. And then, you can have as many pieces of the crumbly deliciousness slathered in the caramel and the chocolate as you want. We totally hit the jackpot. Millionaire's Shortbread Print Recipe For the chocolate: 1 1/4 cups semi sweet chocolate, chopped First, make the shortbread.

A Cozy Kitchen & Churro Tots Happy Wednesday, beautiful people.Factoid for you: Getting my car serviced stresses me.To deal, I totally made Churro Tots. Throw in stress eating and calls to dad, and it some how made everything okay. I encourage it!Last week I went to a cookbook release party at Border Grill and they had churros…in tot form! I was blown away by their cuteness–had to replicate it stat for you all.I basically made a tweaked and adjusted version of this pate a choux recipe. And then fried small balls of the dough.

Homemade Stuffed Pizza Crust Recipe I think there are very few who can vouch and say that they DON'T like Pizza! Its not the healthiest thing to be munching around all the time, but then on occasion when you enjoy it, nothing competes the heartiness and deliciousness of a yummy pizza! I have had my share of pizzas and am at a stage when I can look at a Pizza and not go Ga-ga over it. There is no more salivating or uncontrollable drooling over a dominoes pizza crust. Baked Cinnamon Chips Aloha! It’s good to be back! Thanks to Kate for holding down the fort without me. Banana Split Bites Banana Split Bites ~ A classic ice cream dessert gets mini for some bite size fun. And yes, there is actually a tiny scoop of ice cream tucked inside and underneath the whip cream of those little darlings. Banana Split Mini Bites For once I made something mini for portion control and not just for the cute factor. My little guy had some friends over the other day and of course with a mom who is a baker, the expectation is dessert will not only be good but it will be fun.

Chocolate Chip Cookie Dough Truffles I’ve never liked chocolate chip cookies. Go ahead and throw tomatoes at me if you’d like, but I don’t like ’em. They’re just a plain old cookie, after all, with a few studs of chocolate chips in them. They’re nothing special to me, unless you get some cookie dough-action before it meets its fate in the oven. Now you’re talkin’. The Best Chocolate Chip Cookie Recipe Ever Yeah, yeah, I know! Everyone has a recipe that they say is the best ever. Well, this one is mine. Cheese Pinwheel Rolls Sooner or later, all my conversations inevitably turn to food. Don’t believe me? Call me up sometime and try to, say, sell me some insurance. I guarantee that before we get off the phone, I’ll be giving you my recipe for blackberry jam. A San Diego food blog sharing restaurant reviews and recipes Wednesday, June 1, 2011 I love lava cakes. For a while now I’ve had this idea playing in my mind to create lava cookies. I tried making nutella lava cookies before, but they didn’t come out exactly as I’d hoped, so I wanted to attempt it again.

Cinnamon Sugar Pull-Apart Bread I’m sorry. I know it’s Monday morning and you probably came here for some pretty pictures of food that you could glance at, and then move on with your day… and here I go thrusting warm, soft cinnamon sugar bread in your face. It’s not fair. Marinated Mozzarella Last week Chicago experienced record heat. It is certainly the hottest I remember this city which is more famous for its extreme cold than sweltering temperatures. In the middle of the heatwave, my oven broke. Cheesecakes-Caramel Cheesecake-Mascarpone Cheesecake-Caramel Sauce Posted by Grace Massa Langlois on Thursday, 19th May 2011 I’ve had a bottle of my favourite liqueur, Talea Italian Amaretto Cream, tucked away since Christmas. And for good reason. The liqueur combines rich cream with the heavenly aroma of amaretto, lending the perfect balance of smoothness and flavour. I knew two things: that flavour and the velvety cream would be perfect for my next Cheesecake.

frites & fries - Garlic Knots Most of my early food memories had to do with all the garlic dishes that my grandmother made. Preschool-me was so fascinated by the fact that Grandma smelled like garlic 24/7 and I was always so amazed that something so small could create so much flavor. My grandmother’s native Shangdong province uses a lot of garlic in their cooking so it wasn’t surprising to see my mom or my grandmother use up an entire bulb of garlic for a small dinner. Loving garlic is in my blood. When I make something with garlic in it, I tend to go nuts and use way more garlic cloves than necessary because I love using it.

I'll Eat You: "Man with a Tray Cupcakes" or Malibu Pina Colada Cupcakes with Lime Cream Cheese Frosting Start with a plain old cupcake. Add pineapple, Malibu, and coconut. Bake. Hit it with a syrup made of sugar and Malibu, just for that extra rummy goodness. Frost with your standard cream cheese frosting zinged up with lime juice and zest. Top with a lime wedge.