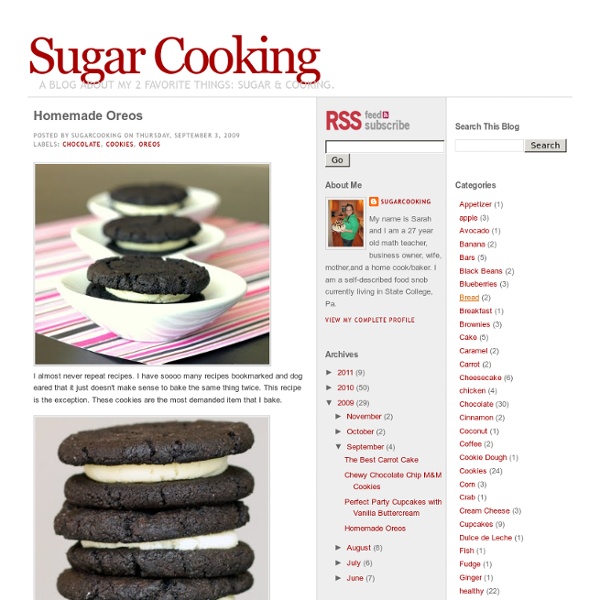 I almost never repeat recipes. I have soooo many recipes bookmarked and dog eared that it just doesn't make sense to bake the same thing twice. This recipe is the exception. As a matter of fact you probably won't even believe me if I tell you who requested these cookies. I first saw these cookies on Smitten Kitchen (one of my absolute favorite blogs, ever!) The filling is a dead ringer for the oreo filling. These will definitely impress anyone you make them for. Recipe: Adapted from Smitten KitchenIngredients:For the chocolate wafers:1 1/4 cups all-purpose flour1/2 cup unsweetened Dutch process cocoa*1 teaspoon baking soda1/4 teaspoon baking powder1/4 teaspoon salt1 to 1 1/2 cups sugar**1/2 cup plus 2 tablespoons (1 1/4 sticks) room-temperature, unsalted butter1 large eggFor the filling:1/4 cup (1/2 stick) room-temperature, unsalted butter1/4 cup vegetable shortening2 cups sifted confectioners sugar2 teaspoons vanilla extract Directions:Set two racks in the middle of the oven.

Chocolate Chip Cookie Dough Truffles Oh. My. God. If you could take perfection, roll it in a ball, and dip it chocolate, this would be it. I’m not joking here folks. I’d strongly advise you to put down the mouse and get your butt to the kitchen, stat. My apologies to the New Years’ resolution folk. The cookie dough itself is egg-free, and potentially dairy free AND vegan if you get picky about what you coat them with. Take it or leave it (but I strongly suggest you take it. Update: Since it was first posted in 2010, I’ve updated this recipe and included it in my new cookbook, The Cookie Dough Lover’s Cookbook (Quirk Books, 2012). You may also like... Lemon Anise Snowflakes As with the lemon that studs them, these loaves are one of those breads I thought would be one thing, but of its own accord (with maybe a little bit of gentle and experimental nudging from me) it turned out to be another thing. Sometimes it’s fun to just let things unfold and see where you end up. The thing I thought it would be was gibassier, a French olive oil brioche traditional during the Advent season, scented with oranges and anise seed, shaped in flat round loaves. It is an amazingly good bread, and ranks among favorite sweet breads for nearly everyone I know who has tasted it. But thanks to my generous crop of lemons just now, my bread asked for candied lemon peel rather than orange. The result turned out to be something slightly less sweet and less citrus-y than gibassier, and a fine way to enjoy a delicately-flavored sweet bread with your morning coffee or tea. I shaped these loaves in two ways. Lemon Anise Snowflakes Yield: 750 g (2 small loaves) Time: Sponge Ingredients: Method:

Microwave 2-minute Chocolate Chip Cookie for One I love the idea of making sweets in a microwave in just a few minutes. I’d made some microwave cakes before and they were so amazing! I should make some again soon so I can share the recipes with you all. When I saw THIS RECIPE on Stumbleupon, I immediately bookmarked it to make it in my own kitchen. Zoom Yummy has great recipes and knitting/crocheting patterns that I love – and I was so glad to find this wonderful recipe that is so simple and easy to make. I made a slight change to the recipe; I used salted butter instead of unsalted and omitted salt in the recipe. The finished cookie actually tastes like a cookie, and have a crunchy texture like a cookie (Not exactly like a cookie. In a shallow, microwavable bowl, place 1 1/2 tablespoons sugar, 1 1/2 tablespoons brown sugar, and 2 tablespoons salted butter (softened at room temperature). Fluff them together using fork, until fluffy and well mixed. Beat one egg well and add 2 tablespoons beaten egg to the butter mixture.

Best pizza spots in the U.S. Top chefs and fabled bakers are among the new breed of pizzaiolo who are just as fanatic over the temperature of their ovens as how local their ingredients are. They're elevating pizza around the country from greasy pies in cardboard boxes to inspired creations with crackly, charred crusts topped with house-made cheese and charcuterie. If you'd like to see your images on Yahoo! Travel, join now and submit your own! Here, we've chosen 10 of the best places for pizza around the country, from new-guard spots to the nearly century-old East Coast institutions started by the original pizzaiolo obsessives that loyalists still (rightfully) love. (Related: 5 crazy pizza toppings for 2012.)New York City: Co. Co. Signature Item: Popeye (with pecorino, Gruyère, mozzarella, spinach, black pepper and garlic). Sullivan Street Bakery founder Jim Lahey is one of the country's elite bakers, so it makes sense that people can't stop talking about his chewy, crisp, ever-so-slightly tangy pie crusts.

Homemade Peanut Butter Cups I’ve always wanted to make my own chocolate and peanut butter cups. The recipes are so easy, I’m not sure why I’ve never gotten around to it until now. They really took no time at all, in nearly 30 minutes I was already sinking my teeth into these oh-so-rich peanut butter cups. I looked at a few recipes and skipped on most of them. My notes: I took the advice from Have Cake, Will Travel and added 2 tablespoons of peanut butter to the melted chocolate; I did not add extra salt; I melted the chocolate in a heavy-bottom saucepan rather than the microwave; I used regular sized cupcake liners, not minis, so mine are closer to Reese’s Peanut Butter Cups size; I used the freezer instead of the refrigerator to set up the chocolate on the bottom. They are so delicious. Due to the continued popularity of this post, I am going to finally post the recipe here instead of only linking to it! Homemade Chocolate Peanut Butter CupsAdapted from Have Cake, Will TravelMakes 12

Lookie at my Cookies: Peanut Butter Cup Brownies | NOSH AND TELL April 1, 2009 • Ariel and Whitney Eat your heart out Reese’s, there’s a new peanut butter cup in town. I am convinced peanut butter and chocolate were made for each other, like Charlie and Claire on LOST–I’m only on Season 2 right now but someone please tell me they have gotten together. My Peanut Butter Cup Brownies were adapted from a recipe found on Bake or Break, I opted to use milk chocolate chips instead of the peanut butter chips for a little different flavor. Peanut Butter Cup Brownies Makes 1 dozen brownies 3/4 cup granulated sugar 1/4 cup butter, softened 1 tablespoon water 1 cup semi sweet chocolate chips, plus about 1/3 cup more for garnishing 1 large egg* 1/2 teaspoon vanilla 1 cup all purpose flour 1/4 teaspoon baking soda 3/4 cup milk chocolate chips, plus about 1/3 cup more for garnishing 3/4 cup creamy peanut butter* *Healthy Swaps: I used egg whites instead of an egg (2 egg whites per egg called for) and reduced fat creamy peanut butter. Preheat oven to 350 degrees. Bon Eating,

Pizzelles Third post in a row that is about food... guess you can tell what has been filling my days! These pizzelle cookies have been a tradition in our family since I received the recipe from an Italian neighbor in 1985 when I had a cookie swap. They are a favorite! Crisp, delicate and the wonderful flavor of anise. Not too intense ~ just right. Pizzelles 6 eggs 3 1/2 cups flour 1 1/2 cups sugar 1 cup butter (1/2 pound), melted and cooled 4 tsp. baking powder 2 Tbs. vanilla 2 Tbs. anise seeds *Do NOT use oil substitute. Yields about 60 cookies 1) For the first time ever, since I did not have enough anise seeds, I added anise oil. 2) I give the Pizzelle maker a light spray with PAM before baking and never have problems with sticking. 3) 45 seconds on the Pizzelle maker is perfect for lightly golden brown cookies (using a level tablespoon of batter). 4) After removing from the Pizzelle maker (I use a fork), I allow the cookies to cook on a rack. 5) In MHO, cookies store best in tins. Linking to:

thick, chewy oatmeal raisin cookies I woke up Sunday morning craving oatmeal raisin cookies something fierce, so I tried to make myself eat oatmeal with raisins and brown sugar in it for breakfast but that didn’t work, and so there was nothing left to do but to bake cookies. My life is so hard, innit? I have very specific tastes in oatmeal raisin cookies. A crisp edge is always welcome, but the rest of it must be thick and chewy. Just to confuse, this is unlike other oatmeal cookie recipes on this site, the crunchier chocolate chip pecan version and the thick but shattery, salty white chocolate version. I start with the standard recipe on every can of Quaker oats and then start making it better. And then I try not to eat them for breakfast. Thick, Chewy Oatmeal Raisin Cookies The last trick to getting a really thick, chewy cookie is to chill the dough before you bake it. This is a half recipe. New note, 2/2/13: We’ve gotten in the habit (terrible habit, heh) of making these lately, Oatmeal Raisin Chocolate Chip-style.

Making Mozzarella At Home For Christmas we received a Mozzarella kit from Leener's. We had heard it was quite easy to make but I have to admit I was a little skeptical. Well, I was so wrong, making mozzarella was super easy to make & the results were wonderful! You just have to have a little patience to let the milk heat slowly & in an hour you are eating your own fresh cheese! First you ripen 1 gallon of milk with a bit of citric acid, lipase, and calcium chloride. Slowly heating over medium heat to 88 F, stirring from time to time. Once the milk reaches 88°F, you add rennet and continue heating to 105 F. By the time it reaches 105°F, it will start to look at little chunky. After resting for 20 minutes you'll be rewarded with a big chunk of cheese curds. Remove the curds with a slotted spoon, leaving the whey in the pan. Lightly smash the curds with a spoon to squeeze as much whey out of them as possible, then drain. At this point you will have a soft mozzarella ball. Now you can enjoy your own homemade cheese.

Hazelnut Sandwich Cookies It's been cold here in Pittsburgh, but we're still waiting for that big snow. It seems that we've had a constant flurry of snow coming down, but no accumulation to speak of. It's been beautiful and I should probably count my blessings that the roads are clear and we haven't had to shovel, only brush the walks. Annie's been dying to get out there and play in the snow, but there's not even enough to build a proper snowman. We can even still see the tips of grass poking through the snowy white layer on the ground. Even our friends half an hour north have had enough snow for sledding, but somehow it's missed us so far. In my mind, it's been perfect - I can get to the store without any problems, and there's no buildup of snow on the old slate roof to cause trouble. These hazelnut sandwiches are amazing! The cookie itself is the perfect consistency - not too hard when you bite into it, that all the filling oozes out, and not chewy either - they're soft with a bit of a sandy texture. 2. 3. 4.

Shortbread Buttons Button up, let's bake! After baking macarons last night once again I felt inspired to attempt some ather recipes. I stumbled upon Nikole Herriott's flickr page which provided me with Shortbread button recipe & amazing photography. What more can you ask for.