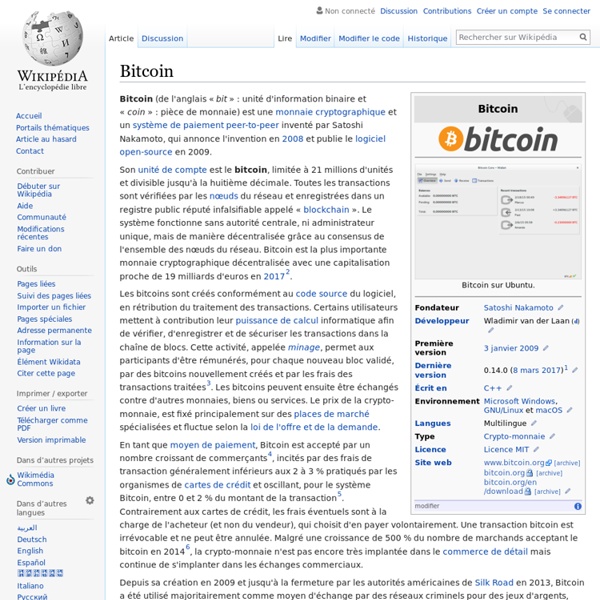 Digital currency A virtual currency or virtual money has been defined in 2012 by the European Central Bank as "a type of unregulated, digital money, which is issued and usually controlled by its developers, and used and accepted among the members of a specific virtual community".[1]:13 The US Department of Treasury in 2013 defined it more tersely as "a medium of exchange that operates like a currency in some environments, but does not have all the attributes of real currency".[2] Attributes of a real currency, as defined 2011 in the Code of Federal Regulations such as real paper money and real coins are simply that they act as legal tender and circulate "customarily".[3] The key attribute a virtual currency does not have at this time, is the status as legal tender. History[edit] Closed virtual currencies[edit] Virtual currencies have been called "closed", when they have no connection to the real economy, like currencies "in-online -games-only" such as World of Warcraft (WoW).

Why Bitcoins Are Just Like Gold King Tut's golden burial mask, via Bjørn Christian Tørrissen Plenty of people still have a difficult time wrapping their heads around what bitcoin is or why it even has value, especially as the virtual cryptocurrency continues to scale record heights. How isn't this a Ponzi scheme, many have wondered? Une FAQ Bitcoin Updated 9/30/2013 -- © Christian Wagner Short Version 1) Should I buy Bitcoins? No. 2) But I keep seeing all this stuff in the news about them and how American Economic Association Abstract Bitcoin is an online communication protocol that facilitates the use of a virtual currency, including electronic payments. Bitcoin's rules were designed by engineers with no apparent influence from lawyers or regulators. Bitcoin is built on a transaction log that is distributed across a network of participating computers. It includes mechanisms to reward honest participation, to bootstrap acceptance by early adopters, and to guard against concentrations of power. Bitcoin's design allows for irreversible transactions, a prescribed path of money creation over time, and a public transaction history.

Wary of Bitcoin? A guide to some other cryptocurrencies It might have passed you by, but an essential part of the internet's infrastructure took a heavy knock last week. The Silk Road -- you know, " the website where you can buy any drug imaginable" -- was subjected to a series of distributed denial of service (DDoS) attacks. Calling the Silk Road "essential" might seem an exaggeration, but it won't be if you're one of its many regular users. Nor if you're a regular user of Bitcoin -- its journey to mainstream acceptance began with the Silk Road, being as it is perfect for anonymous, untraceable transactions (as long as you're careful not to make your identity obvious, of course). Right now, Bitcoin is undeniably a mainstream currency, even if it is not necessarily popular in the sense of being used by a significant proportion of society.

When Governments Take Your Money, Bitcoin Looks Really Good The tiny island of Cyprus became the center of the financial universe over the weekend, after its leaders, facing financial collapse and pressure from EU authorities, announced a plan that would let the government withdraw money directly from citizens' savings accounts in order to fund a massive bailout of its flailing banking sector. As of publication, the measure seemed bound to be rejected by Parliament. But the idea lingers, and has sent shockwaves across a Europe struggling for financial stability. Hear that?

2011/05 Bitcoin P2P Currency: The Most Dangerous Project Solid discussions of this piece on BoingBoing.net, Hacker News, Slashdot and Reddit. Rob Tercek has a follow up to this piece here. by Jason Calacanis and the LAUNCH team A month ago I heard folks talking online about a virtual currency called bitcoin that is untraceable and un-hackable. The Well Deserved Fortune of Satoshi Nakamoto, Bitcoin creator, Visionary and Genius I won’t discuss anything in this post. I’m tired of discussing technical things with people with skewed opinions and monetary interest. I’ve talked enough in the Bitcointalk forum about Satoshi.

Wary of Bitcoin? A guide to some other cryptocurrencies It might have passed you by, but an essential part of the Internet's infrastructure took a heavy knock last week. The Silk Road—you know, the website where you can buy any drug imaginable—was subjected to a series of distributed denial of service (DDoS) attacks. Calling the Silk Road "essential" might seem an exaggeration, but it isn't if you're one of its many regular users.

Amazon’s new “virtual currency” of dubious benefit to customers Straight from Amazon's press room comes the news that Amazon has officially launched Amazon Coins, which the company excitingly claims are "a great way for customers to save money when they buy apps, games and in-app items" for Kindle Fire users. To help everyone start using Amazon Coins, Amazon has deposited 500 of them into the accounts of all existing and new Kindle Fire users in the US. Amazon Coins were initially announced back in February, with the company saying they're primarily designed to benefit developers and consumers. "For customers, Amazon Coins is an easy way to purchase apps and in-app items on Kindle Fire, and for developers it’s another opportunity to drive traffic, downloads and increased monetization," proclaims this morning's press release. The biggest problem is the inevitable misalignment between "coins" purchased and "coins" used.

Feds seize money from Dwolla account belonging to top Bitcoin exchange Mt. Gox The Department of Homeland Security has apparently shut down a key mobile payments account associated with Mt. Gox, the largest Bitcoin exchange. Chris Coyne, the co-founder of online dating service OKCupid, tweeted out an e-mail he received from Dwolla this afternoon. Bitcoins: Why They're More Than a Bubble The volatile rise-and-fall of Bitcoin has prompted lots of stories explaining why the online virtual currency is a classic bubble. Many compare it to tulip mania in 17th century Holland, where prices of rare tulip bulbs soared to absurd heights and then crashed, ruining the speculative investors who had bought them. But the Bitcoin phenomenon is more than a bubble.