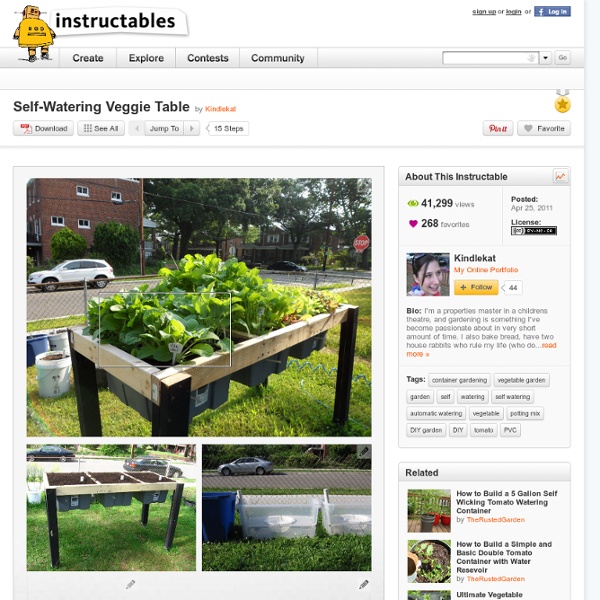 A Brief History of Gardening in Containers: Do you like gardening but digging in the dirt is too painful, messy, or time consuming? Container gardening is your answer. For many years now, container gardeners have been using pots, tubs, and boxes of all sizes to garden in. While raised bed gardens have also gained in popularity, so have "bucket gardens" or tubs become an economical way to garden with more control over your soil and more success with hard to grow vegetables. Recently, the advent of so-called "self watering" containers have helped gardeners to grow flowers, vegetables, and herbs with even more success. At the University of Maryland Extension, Jon Traunfeld designed a Salad Table which is essentially a shallow wooden frame with a large surface area and a mesh bottom that allows water to drain. The Idea: I loved the idea of a salad table as a way to maximize the space I have to grow salad greens to feed myself and my rabbits. What is Self-Watering?

How to Dehydrate Vegetables, Instructions for Dehydrating Vegetables from the Garden Dehydrating Vegetables from the Garden How to Dry Vegetables Instructions for Dehydrating Vegetables: Dehydrating vegetables (whether fresh from the garden, the farmer's market, or even just from the grocery store at in-season prices) for use in the off-season is one of the healthiest ways of preserving vegetables. Dehydrating vegetables preserves them with a nutritional content that far surpasses that of canned vegetables. DIY IKEA Shelf In-Home Aquaponics - Planted Space Dubbed "Malthus," this Ikea-hacked project by Conceptual Devices pieces together a 100g fish tank, plastic grow beds, a pump and piping onto an IKEA Broder shelf, with wheels. Malthus is designed to be an in-home unit, and to grow one meal a day, a portion of fish with a side of salad. If you don't know yet, aquaponics is basically hydroponics + fish in a sustainable loop. The fish provides nutrients and CO2 to the plants, and the plants in turn purifies the water and returns O2 to the fish.

Types of Water: Gray Water, Black Water and White Water" Sure, gray water sounds like something worth reusing, but what's in it exactly? First, let's draw the line between gray and black. The key difference between the two is that black water has come into contact with fecal matter. Fecal matter is a haven for harmful bacteria and disease-causing pathogens. Additionally, this waste doesn't break down and decompose in water fast or effectively enough for use in domestic irrigation without the risk of contamination. Gray water, on the other hand, has not come into contact with solid human waste.

Best Ways To Water Your Garden In summer, when there usually isn't enough rain to forgo watering all together and the heat is testing your plants, there is a temptation to inundate your soil with a constant flow of water. And it seems most give in to this instinct, abiding to daily waterings of their gardens without question. But with a lack of rain comes a need for water conservation. And oddly enough, less watering isn't actually counterintuitive to plant health.

100-Year-Old Way to Filter Rainwater in a Barrel During our boiling, broiling, blistering summer of 2012 here in the Missouri Ozarks, water was a topic of conversation wherever we went. Creeks and ponds dried up (some never recovered) and the water table dropped, forcing a few neighbors to have their well pumps lowered or to even have deeper wells drilled. Many folks shared memories of rain barrels, cisterns, hand pumps and drawing water with a well bucket as a child, usually on grandpa and grandma’s farm. Some said they’d never want to rely again on those old-time methods of getting water.

Off Grid Rainwater System Collects, Stores, and Purifies Water This rainwater collection system in the Canadian wilderness has provided a source of clean, potable water for this family of four’s off grid cabin for almost 20 years. The system is relatively simple and very low maintenance. Water is collected using a three hundred square foot piece of metal roofing, where it flows downhill into a gutter. It is passed through a layer of plastic mesh as it runs into the gutter to filter out any large debris, including the needles that drop onto the roof from surrounding trees. The water is then passed through a course filter as it leaves the gutter, filtering out even more of the larger debris.

66 Things You Can Grow At Home: In Containers, Without a Garden" Growing your own food is exciting, not only because you get to see things grow from nothing into ready-to-eat fruits and veggies, but you also don't have to worry about the pesticides they might contain, and you definitely cut down on the miles they—and you—have to travel. As it turns out, with pretty minimal effort, anyone can be a gardener. My boyfriend and I are essentially first-timers this season and so far have the beginnings of strawberries peeking out, tomatoes are on their way, the basil's about ready for a big batch of pesto, and once the last frost hits, the peppers, kale, spinach, chard, and mesclun will be on their way, too. All on a tiiiny little terrace (with the help of a little DIY carpentry).

Video: DIY Rainwater Collection System Here’s a great video from MrNativeTexan that will show you how put together a simple-to-construct rainwater collection system for your garden! There are a couple of neat ideas going on here – connecting the barrels with a manifold not only makes them fill at the same rate, but there’s also only one tap needed. Four barrels leads to an increased pressure at the tap and the barrels drain from below so they can be fully emptied. Water is synonymous with life, it’s a precious resource and we need to reduce our demand wherever possible to save trouble for future generations. Rainwater Harvesting Basics Ironically, water use in developed countries often is highest in the places where rain falls the least. Rainwater harvesting is one easy and low tech solution in reducing domestic water use. How to utilize rain water

Using Milk as a Natural, Homemade Pesticide - Organic Gardening Spraying your plants with milk won't drive bugs away from your garden, but the dairy product can be used to culture Bacillus thuriugiensis Berliner, a well-known bacterial pesticide sold under such brand names as Dipel, Thuricide and Biotrol. The agent is quite effective in controlling — among a number of insect problems — infestations of loopers, which are those pesky little worms (they're actually moth larvae) that attack broccoli, cabbage, cauliflower and other members of the cole family. Once eaten, the bacteria paralyze the larvae's intestinal tracts and bring about their death in two to four days.Before you spray your garden with thuringiensis, though, be aware that this bacterial-warfare weapon is fatal to the caterpillars of all Lepidoptera (an order of insects that includes many lovely, and relatively harmless, moths and butterflies) . . . so please don't employ the remedy in cases where simply handpicking the loopers off your plants will do the job. Using Milk as a Pesticide

The Rainwater Harvesting Community All proceeds generated by the site through sponsors is used to build awareness and support the website through direct research and new articles. If you are interested in writing an article for the website, please drop us a note. We gladly welcome articles, but please no product endorsements. The HarvestH2o Team Doug Pushard founded HarvestH2o.com over 10 years ago as a personal expression of his interest in the subject of rainwater catchment and water conservation.