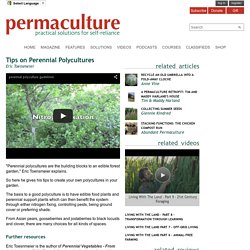 So here he gives his tips to create your own polycultures in your garden. The basis to a good polyculture is to have edible food plants and perennial support plants which can then benefit the system through either nitrogen fixing, controlling pests, being ground cover or preferring shade. From Asian pears, gooseberries and jostaberries to black locusts and clover, there are many choices for all kinds of spaces. Further resources Eric Toesnmeier is the author of Perennial Vegetables - From Artichokes to Zuiki Taro, A Gardener's Guide to Over 100 Delicious and Easy to Grow Edibles (US customers can buy this from Chelsea Green Publishing) Also check out: Edible Perennial Gardening: Growing Successful Polycultures in Small Spaces for just £11.20 on our Green Shopping site (also available as an eBook) Permaculture Plants: Willow. 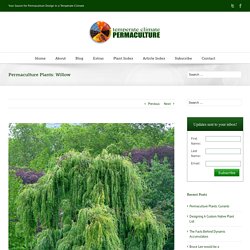 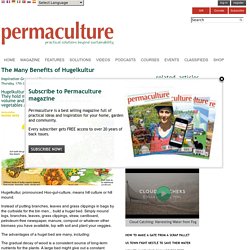 Instead of putting branches, leaves and grass clippings in bags by the curbside for the bin men... build a hugel bed. Simply mound logs, branches, leaves, grass clippings, straw, cardboard, petroleum-free newspaper, manure, compost or whatever other biomass you have available, top with soil and plant your veggies. The advantages of a hugel bed are many, including: The gradual decay of wood is a consistent source of long-term nutrients for the plants. A large bed might give out a constant supply of nutrients for 20 years (or even longer if you use only hardwoods). Soil aeration increases as those branches and logs break down... meaning the bed will be no till, long term. The logs and branches act like a sponge. Sequester carbon into the soil. On a sod lawn Sepp Holzer (hugelkultur expert) recommends cutting out the sod, digging a one foot deep trench and filling the trench with logs and branches. Further resources. Making Mushroom Growing Sustainable - Part 1, the Set-up.

Oyster mushrooms Gourmet mushrooms are an excellent addition to a Permaculture farm. 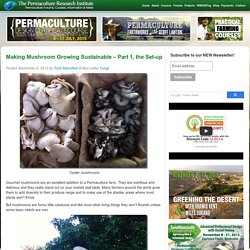 They are nutritious and delicious and they really stand out on your market stall table. Many farmers around the world grow them to add diversity to their produce range and to make use of the shadier areas where most plants won’t thrive. But mushrooms are funny little creatures and like most other living things they won’t flourish unless some basic needs are met. Huge king oyster Here at Fungi Culture we’re in the process of compiling all the information, tricks, tips and techniques to get a small- to medium-sized oyster mushroom growing enterprise set up and running smoothly.

Obviously this is too much info for one article, so it’ll have to be split up into manageable bites. Step 1 — choosing which mushroom to grow The first mushroom people think to grow is the common button mushroom found in grocery stores worldwide. Oyster Mushrooms on the other hand… The Set-up You’ll need a suitable spot to grow them. DIY Wattle Garden Beds. GrowVeg.com - Plant Information GrowGuide for Wheat. Mushroom cultivation - info, training, products & servicesinfo, training, products & services. 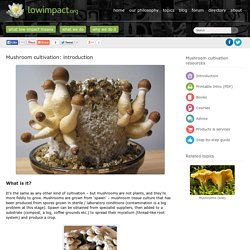 It’s the same as any other kind of cultivation – but mushrooms are not plants, and they’re more fiddly to grow. Mushrooms are grown from ‘spawn’ – mushroom tissue culture that has been produced from spores grown in sterile / laboratory conditions (contamination is a big problem at this stage). Spawn can be obtained from specialist suppliers, then added to a substrate (compost, a log, coffee grounds etc.) to spread their mycelium (thread-like root system) and produce a crop. Button mushrooms in a growing box. There are two major stages in mushroom growth. Oyster mushroom tissue culture in a petri dish. There are three types of mushrooms that can be cultivated: History Humus-inhabiting: around 1650, in France, it was noticed that button mushrooms appeared naturally in the autumn after the melon crop.

Shiitake mushrooms growing on a hardwood log. Wood-inhabiting: there are written records of shiitake cultivation from around 1000 years ago in China. Seven Parts of an Apple Tree Guild - Open Permaculture - Permaculture Design Course. Guild, or companion, planting is one of the fundamental techniques of permaculture gardening. 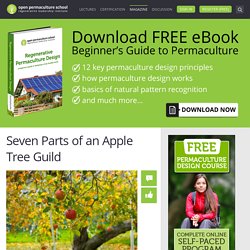 It taps into permaculture ideas such as self-sufficient systems, plants providing multiple functions, and maximizing the productivity of a plot. Guilds are typically set up around a central fruit tree. Each plant species in the ecosystem performs one or more functions that benefit others in the vicinity, as well as interacting with animal species and soil microorganisms to create an ecosystem. Below are examples of species that can be used to make an effective guild planting around an apple tree. Apple Tree At the centre of the guild stands an apple tree. Suppressors Plants that have bulbs are characterised by short stems and fleshy leaves, besides the underground bulb that acts as an energy store for when the plant is dormant. Attractors Attracting a variety of insects to the guild is beneficial for two reasons.