How to grow your own mistletoe – RHS Gardening. Before science determined what was really going on, people saw mistletoe (Viscum album) as a magical plant, a bushy little shrub with no roots that mysteriously remained green, high up in tree branches, while the leaves fell all around it. 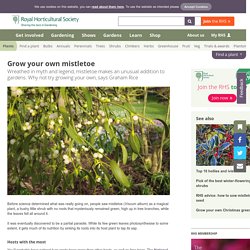 It was eventually discovered to be a partial parasite. While its few green leaves photosynthesise to some extent, it gets much of its nutrition by sinking its roots into its host plant to tap its sap. Hosts with the most You’ll probably have noticed it on apple trees more than other hosts, as well as lime trees. The National Mistletoe Survey confirms these are the top two hosts followed by hawthorn, poplar and maple then willow, crab apple and false acacia (Robinia). ►RHS advice: how to sow mistletoe seed One thing to keep in mind is that mistletoe comes as male or female plants and, of course, like holly, only the females carry berries. 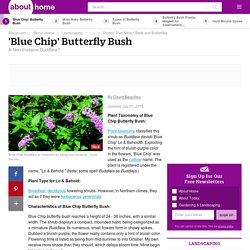 Plant Taxonomy of Blue Chip Butterfly Bush: Butterflies and Gardens. 17 August 2013 I’ve spoken in a previous article about the buddleia trial going on in Dorset and the first year results. 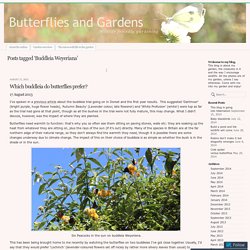 This suggested ‘Dartmoor’ (bright purple, huge flower heads), ‘Autumn Beauty’ (Lavender colour, late flowerer) and ‘White Profusion’ (white!) Were top as far as the trial had gone at that point, though as all the bushes in the trial were not fully mature, this may change. What I didn’t discuss, however, was the impact of where they are planted. Butterflies need warmth to function: that’s why you so often see them sitting on paving stones, walls etc: they are soaking up the heat from whatever they are sitting on, plus the rays of the sun (if it’s out) directly. Six Peacocks in the sun on buddleia Weyeriana. This has been being brought home to me recently by watching the butterflies on two buddleias I’ve got close together.

‘Lochinch’, by contrast, is in shade for quite a bit of the day, as you can see below, thanks to a laurel hedge becoming rather over-enthusiastic. How to design a garden. Hedgehog 16pp Booklet FINAL. Old Court Nurseries and The Picton Garden - Specialist growers of Autumn flowering Asters since 1906. Old Court Nurseries and The Picton Garden. Welcome to the home of the Plant Heritage National Collection of Autumn Flowering Asters. 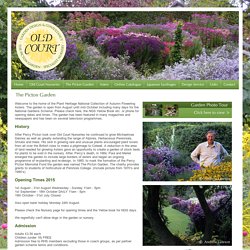 The garden is open from August until mid October including many days for the National Gardens Scheme. Please check here, the NGS Yellow Book etc. or phone for opening dates and times. The garden has been featured in many magazines and newspapers and has been on several television programmes. History After Percy Picton took over Old Court Nurseries he continued to grow Michaelmas Daisies as well as greatly extending the range of Alpines, Herbaceous Perennials, Shrubs and trees. Opening Times 2015 1st August - 31st August Wednesday - Sunday 11am - 5pm 1st September - 18th October DAILY 11am - 5pm 19th October - 31st July Closed Also open bank holiday Monday 24th August. Please check the Nursery page for opening times and the Yellow book for NGS days. We regretfully can't allow dogs in the garden or nursery. Admission Please contact us for information on group visits and garden tours.

Garden Tour. Pruning Apple Trees – A few Basic Guidelines with Pictures. You should be pruning apple trees in the late winter or early spring. 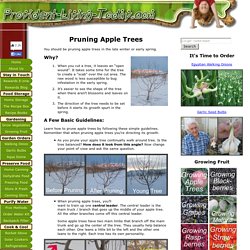 Why? When you cut a tree, it leaves an “open wound”. It takes some time for the tree to create a “scab” over the cut area. The raw wood is less susceptible to bug infestation in the early spring.It’s easier to see the shape of the tree when there aren’t blossoms and leaves on it. The direction of the tree needs to be set before it starts its growth spurt in the spring. A Few Basic Guidelines: Learn how to prune apple trees by following these simple guidelines. As you prune your apple tree continually walk around tree. When pruning apple trees, you’ll want to train up one central leader. Our Advice Section & Customers Meadow Pictures. This entry was posted on October 20, 2013 by Tim Evans. 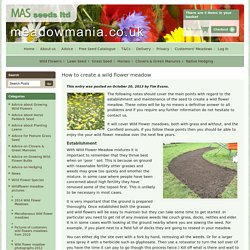 The following notes should cover the main points with regard to the establishment and maintenance of the seed to create a wild flower meadow. Olive Trees - Growing, Pruning, Harvesting, Care. OLIVE TREE - Olea The olive tree, Olea is an evergreen tree with silvery leaves and a twisted and gnarled trunk. 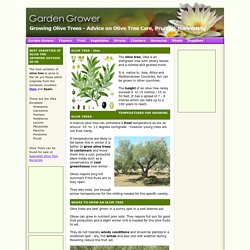 It is native to Asia, Africa and Mediterranean Countries, but can be grown in other countries. The height of an olive tree rarely exceeds 8 to 15 metres / 25 to 50 feet. It has a spread of 7 - 9 metres which can take up to a 100 years to reach. A mature olive tree can withstand a frost temperature as low as around -10 to -12 degrees centigrade - however young trees are not frost hardy. If temperatures are likely to fall below this in winter it is better to grow olive trees in containers and move them into a cool, protected place inside such as a conservatory or cool greenhouse over winter . Olives require long hot summers if the fruits are to fully ripen. They also need low enough winter temperatures for the chilling needed for the specific variety. Olive trees are best grown in a sunny spot in a well drained soil. Lifehacker.