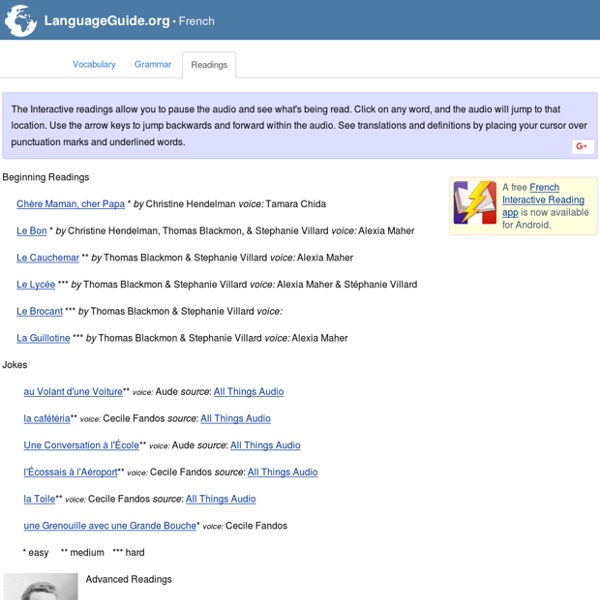 French reading comprehension exercises Lecture - Compréhension écrite Here you can practise French with reading comprehension texts based on French culture. Recommended books This is a great way to learn French! This book contains 15 fun short stories in French that will help you improve your French reading, as well as pronunciation and listening skills, since you can download the audio of all stories for free! There are two versions: a slow version to improve pronunciation and a normal version at natural speed.

500 Free Online Courses from Top Universities Advertisment Take online courses from the world’s top universities for free. Below, you will find 1,700 free online courses from universities like Yale, MIT, Harvard, Oxford and more. Our site also features collections of Online Certificate Programs and Online Degree & Mini-Degree Programs. Learn French with French Children's Stories - The French Experiment Some well-known children's stories translated into French and spoken by a native French speaker. Great for kids... and adults too! Read along in French or English. Les Trois Petits Cochons Military costs out of control With the last two lines of the Adam Chance letter ("More pain for shooting victim," July 29), I agree 100 percent. I have Medicare, and I feel it could be afforded by everyone, if Congress had enough backbone to stop the extremely wasteful spending by the Pentagon and CIA in their race to create a world empire. Right now, they are busy building military bases all over Africa and Arabia. ...

Military spending shouldn’t be increased - Your Houston News: Opinion On his recent trip abroad, Mitt Romney observed an American taboo by not criticizing President Obama’s military policy. But before his trip, he made his position clear. Obama has “exposed the military to cuts that no one can justify,” Romney said. He meant that unless Congress intervenes, Pentagon spending will be cut by more than $500 billion over 10 years under the (bipartisan) budget sequestration scheduled for January. This terrifies those who fear that limiting the growth of the military-industrial complex will leave us less safe. But is that true?

French Reading French Reading If you're trying to practice your French Reading then the page below should help. You will be able to sharpen your comprehension and understanding of the sample text below, which is part of the Article 26 and 27 from the Universal Declaration of Human Rights. World Economic Forum - Global Gender Gap The Global Gender Gap Report 2013 The Global Gender Gap Index introduced by the World Economic Forum in 2006, is a framework for capturing the magnitude and scope of gender-based disparities and tracking their progress. The Index benchmarks national gender gaps on economic, political, education- and health-based criteria, and provides country rankings that allow for effective comparisons across regions and income groups, and over time.

4 Ways to Get Your French Reading Practice Without Cracking Open a Book An entire book in French can be intimidating for some. Especially if you’re a beginner. Or maybe you’re just not a bookworm. For some, the main goal of French reading comprehension is to be able to pick up “Le Comte de Monte-Cristo” (“The Count of Monte Cristo”) and breeze through it like it was in your native tongue, but that doesn’t mean you have to get there by forcing yourself through French literary texts. Practice makes perfect (trite, but true).

When It Comes To Tax Cuts, Neither Side Is Blinking Taxes may be certain, but growth and job creation aren't. As the U.S. edges closer to a year-end "fiscal cliff," Democrats and Republicans haven't budged in their fight over expiring tax cuts for the wealthiest Americans — and how best to help the middle class and get the country back to work. Wednesday's Senate votes on rival tax proposals are largely symbolic. The Democrats' tax plan would extend Bush-era cuts for a year to everyone except individuals earning more than $200,000 and families that make more than $250,000; the Republicans' plan would extend the cuts for all.