Online English Grammar Exercise - Lay or Lie? 1 - ESL/English practice test. Youtube. If - Pink Floyd (Lyrics) "Weird Al" Yankovic - Word Crimes. Past of You - Serkan Korkmaz. Common Errors in the Use of English Prepositions. A preposition connects nouns and pronouns and serves to provide necessary details that tell the reader when, where, or how something occurred… Incorrect: I recommend you to take a long vacation.Correct: I recommend that you take a long vacation.Incorrect: Come to here.Correct: Come here.Incorrect: The sun rises from the East.Correct: The sun rises in the East.Incorrect: The thief got in from the window.Correct: The thief got in through the window.Incorrect: Let's begin from page 10.Correct: Let's begin at ( on ) page 10.Incorrect: Are you home tomorrow.Correct: Are you at home tomorrow.Incorrect: There is a limit in my patience.Correct: There is a limit to my patience.Incorrect: Is your house insured for fire ?

Työpaikat - Avoimet työpaikat, löydä seuraava työpaikkasi. Fluent LandKey Words for Writing. Fluent Land75 Important Prepositions. Irregular Verbs? Yes,Please! My son Lucas was complaining he was going to have a permanent crick in his neck from spending hourrrrrs (or words to that effect) trying to learn irregular verbs in English when it occurred to me there might be plenty of sites on the Internet to help students, and my own son in this case, with this seemingly daunting task. 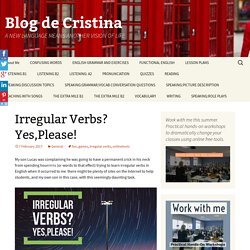 And just as I predicted there are some cool sites that offer a nice alternative to the traditional pen-and-paper method of learning irregular verbs. Hard to believe me? Then, try these games and I bet you’ll be delighted next time you are asked to study them. Dear Lucas, this post is for you!!! Jeopardy Quiz Game Fun activity to teach action verbs in the irregular past simple tense. Irregular Verb Wheel Game An enjoyable game where irregular verbs are chosen at random from a spinning wheel. Hangman Game From eslgamesplus.com, the always entertaining hangman game; in this case, with irregular verbs. Irregular Verbs Walk the Plank Create your own. Can You Catch These Native Speaker Mistakes?

From VOA Learning English, this is Everyday Grammar. 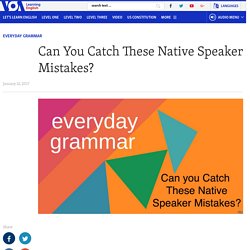 This week, we will learn a few English words and phrases that are commonly misused in English. Even well-educated native English speakers make the mistakes you will read and hear about today, including reporters and English teachers! After today’s program, you can have fun finding these mistakes when other people use them. Let’s start with a very common written mistake that native English speakers make. "could of" or could’ve If you spend time on social media, such as Facebook, you may see that native English speakers often use the word of after the words could, would or should. I could of gone to New York last weekend. However, the word of is a preposition. The preposition of sounds just like the shortened version of the verb have, which is pronounced ’ve.

In speaking, this is not a problem, since both phrases sound the same. In writing, an easy way to remember the correct form is that could, would and should are helping verbs. Learn English with us. English Grammar Mistake: Common Grammatical Mistakes And How To Avoid Them - Fluent LandFluent Land. The English Language is a difficult beast to tie down. 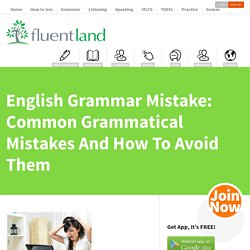 Even those rules which we consider mandatory may actually change very quickly, especially with words moving into ever more fleeting media. However, there are a few mistakes which – for now at least – can make you look very silly… Most Common English Grammar Mistake And How To Avoid Them English Grammar Mistake 1. Its/it’s Apostrophes should be used to indicate possession, but there is one exception to this rule, and that is the word “it”. The rules: “It’s” is only ever used when short for “it is”. Phrasal verb videos. "Weird Al" Yankovic - Word Crimes. Singular "they" - definition and examples in English grammar. 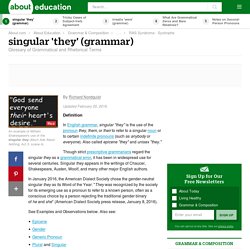 Definition In English grammar, singular "they" is the use of the pronoun they, them, or their to refer to a singular noun or to certain indefinite pronouns (such as anybody or everyone). Also called epicene "they" and unisex "they. " Though strict prescriptive grammarians regard the singular they as a grammatical error, it has been in widespread use for several centuries. In January 2016, the American Dialect Society chose the gender-neutral singular they as its Word of the Year: "They was recognized by the society for its emerging use as a pronoun to refer to a known person, often as a conscious choice by a person rejecting the traditional gender binary of he and she" (American Dialect Society press release, January 8, 2016). See Examples and Observations below.

Third-Person Pronouns Examples and Observations "When a person talks too much, they learn little. "