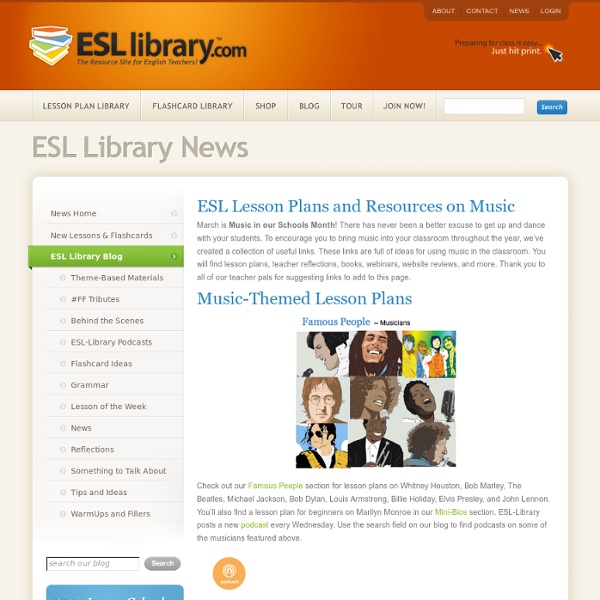 March is Music in our Schools Month! There has never been a better excuse to get up and dance with your students. To encourage you to bring music into your classroom throughout the year, we’ve created a collection of useful links. These links are full of ideas for using music in the classroom. Music-Themed Lesson Plans Check out our Famous People section for lesson plans on Whitney Houston, Bob Marley, The Beatles, Michael Jackson, Bob Dylan, Louis Armstrong, Billie Holiday, Elvis Presley, and John Lennon. Check out our Famous Things section for lesson plans on Jazz, Hip Hop, and Rock n’ Roll. We have Discussion Starters lesson plans on Talent and Music Piracy, and Mini-Debates on File Sharing and Live 8 Concerts. Flashcards Are you looking for images related to music? Authentic Materials and WarmUps What Makes a Teacherjerker? Teaching With the Chimes of Freedom Album Street Musician Experiment The Red Carpet Articles about Using Music in the Classroom DJ ELT: Mike Harrison Grammaropolis Song

Learning English with Songs 865 Flares Twitter 55 Facebook 734 Google+ 6 LinkedIn 70 inShare70 865 Flares × Learning a Foreign Language Have you tried learning a foreign language as an adult? What were some of your experiences? Learning a foreign or second language is easy for young people, but it gets more difficult to learn as one gets older. One of the reasons may be that we become dependent on our first language and do not feel the need for an alternative language. Learn to Relax and Relax to Learn Who is Jason R. Jason R. Jason’s Youtube Channel Jason’s Specialties Jason specialises in all things connected ESL and EFL, K-12 curriculum and materials design, adult education curriculum and materials design, curriculum and materials for TOEFL, TOEIC, IELTS, CAE, FCE, GED, SAT, GRE, and GMAT, educational music (ColloTunes), educational card games (ColloCards). Jason’s Approach to Language Learning Jason’s approach includes the 3Rs: Relax, Repeat, Remember. WizIQ Conversation (WC) with Jason R. Jason R.

1,197 ESL Songs For Teaching English Worksheets Music can be a great way to connect with your students. Even students who aren’t fluent in English often know the words of popular songs phonetically, which makes these songs ideal resources for teaching your students certain forms of grammar, as well as vocabulary. Many students are happy to work with the unusual phrasing of song lyrics, because they’re learning new meanings for a piece of music that already has meaning in their lives. You might never have noticed it before, but many songs’ lyrics involve just one single tense - which means that as soon as you find a song that contains the tense you want to teach, you’ve got the makings of an exercise that your students will love. While some of our 1,788 worksheets simply focus on a certain feature of grammar that’s used a lot in a given song, others encourage more advanced students to really listen for the song’s meaning, and speak or write about their own interpretations of its lyrics.

Song Meanings at Songfacts How to use songs in the English language classroom What makes for a successful song-based lesson? Adam Simpson, second-time winner of the British Council’s Teaching English blog award for his post on conditionals (written with Paul Mains), explains. One of the big problems we all face, whether teaching English to children or adults, is maintaining learners’ interest throughout our lessons. Consequently, we often have to be very creative in the techniques we use. Planning for the use of songs in class The process of selecting a song is one of the most difficult aspects of using music in a lesson. Carefully examine what it is you want your class to learn in the lesson Is this going to be a lesson focusing on vocabulary, grammar, pronunciation, or a particular topic? Think about the language level of your class The language level of your class will determine not only which songs you can use, but also what other activities – such as games or written exercises – you will use to develop the lesson. How old are your learners? 1. 2. 3. 4. 5. 6.

The Best Online Karaoke Sites For English Language Learners I’ve used music a lot with English Language Learners. Singing feels much less threatening to many who are learning a new language. Karaoke is a good language-development activity, and there are quite a few karaoke sites on the Internet. I thought it would be a good topic for a short “The Best…” list. In order to make it on this list, a site has to be available free-of-charge (or at least some of its resources have to be free), easy-to-use, require no download, and allow students — either alone or in a group — to record themselves singing. There are only a few sites that meet that criteria. SMS Tunes is another similar site. Sing Snap is the newest addition to this list. KaraSongs doesn’t allow students to record themselves, but they have tons of great videos showing the lyrics to popular songs with instrumental accompaniment. Red Karaoke The Karaoke Channel You might also be interested in The Best Music Websites For Learning English and The Best Sites To Practice Speaking English. Related

Sing-along Songs One of the most fun group participation activities for family and friends is to engage in sing-along songs. The essence of a sing-along song is that it has a simple enough melody and memorable lyrics for everyone to easily learn. Many of these popular songs have been around for over a century and are taught to children as part of their grade school music education. "Michael Row the Boat Ashore" is a very well known sing-along song. It was a traditional folk song written in the 1860s that became a huge hit in the early 1960s by The Highwaymen. She'll Be Comin' Round the Mountain Not many songs over a century old are still as popular as "She'll Be Comin' Round the Mountain," which originated in the late nineteenth century by an unknown composer. What A Wonderful World The song "What A Wonderful World" was first popularized in 1967 by Louis Armstrong and in 1999 was inducted in the Grammy Hall of Fame. Louis Armstrong enjoyed one of the longest recoding careers of any singer in history.

Music is Great Introduction This lesson is about music and, in particular, music festivals, which have become an increasingly popular phenomenon in recent times. The lesson aims to develop speaking and listening skills and provides practice of the sub-skills of reading for gist and reading for specific detail. The students’ own experiences and opinions form the basis of all discussion and extension work. Topic Music Level Aims To discuss music tastes and trends To identify the meaning of vocabulary in the context of music festivals To practise reading for gist and specific detail To find out more information about music festivals in the UK and internationally Materials The plans and worksheets are downloadable below in pdf format . Copyright - please read All the materials on these pages are free for you to download and copy for educational use only.