Consumer Behavior: The Psychology of Marketing 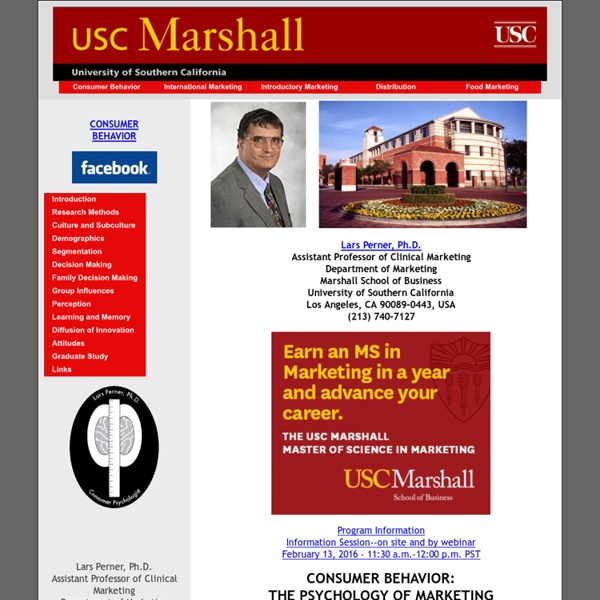 The 14 Most Powerful and Effective Words in Marketing In Go Mobile, the book I’ve written with Jeanne Hopkins from HubSpot, we review a list of the 14 most powerful words in marketing so that readers can use them in their mobile marketing campaigns. This post gives you a sneak peak at the list that’s included in the book. Enjoy. Have you ever bought a product that you didn’t really need? You know the kind — they’re often found in the aisle displays at Lowe’s, WalMart or Barnes & Noble. 5 Psychological Tactics Marketers Use To Influence Consumer Behavior The vast majority of marketers aren’t psychologists. But many successful marketers regularly employ psychology in appealing to consumers. Smart, skillful, honest marketers use psychology legally, ethically, and respectfully to attract and engage consumers, and compel them to buy.

* Is Psychology a science? Introduction Since its first appearance in 2003, this article has become required reading in a number of college-level psychology courses. Because this article is directed toward educated nonspecialist readers considering psychological treatment, students of psychology are cautioned that terms such as "psychology," "clinical psychology" and "psychiatry" are used interchangeably, on the ground that they rely on the field of human psychology for validation, in the same way that astronomy and particle physics, though very different, rely on physics for validation.

Your True Self Revealed - F You are a Considerate Analyst. personalDNA about you You are an Analyst If you want to be different: My collection of funny emails from my inbox. Subject: 5 MINUTE MANAGEMENT COURSE Lesson 1: A man is getting into the shower just as his wife is finishing up her shower, when the doorbell rings. The new shopping behavior that is creating big challenges for the retail industry Shoppers browse merchandise at an Old Navy store in San Francisco.(David Paul Morris/Bloomberg) Think back to December, when you were in the thick of your Christmas shopping. How did you pick out that perfect scarf you put under the Christmas tree for your sister? How did you know you got a good price on those Beats by Dre headphones for your nephew? If you’re like most shoppers, the answer is likely that you did plenty of research before opening your wallet.

Stress Changes Who Men Find Attractive When men are under stress, instead of preferring women who resemble themselves as they normally do, they choose dissimilar women, researchers now find. Scientists in Germany and their colleagues had 50 men look at 30 pictures of erotic female nudes. These photos were computer-modified so their faces subtly resembled either the volunteer in question or another volunteer. All the men in question were white, clean-shaven heterosexual university students of normal weight without facial tattoos or piercings, and none of the men recognized the erotica had been computer-modified or resembled them. Before the volunteers looked at the nude pictures, they put their hands in either comfortable body-temperature water or painfully cold water. Tests of heart rate and blood pressure, as well as of saliva to check for the stress hormone cortisol, all confirmed the cold water stressed the men while the warm water did not.

30 Bizarre and Creative Packaging Design Examples Inspiration November 1, 2010 One of the things that identifies the image of a product is its packaging. Few elements like striking graphics, attractive colors, and unusual shapes are carefully thought of to come up with packaging design that catches the attention of the consumers. A packaging design is a critical component in marketing because it is the packaging that makes it stand from the rest when consumers choose a product from the shelf. The Truth About Being "Done" Versus Being "Perfect" In 2010, a small California-based company opened its doors for business. They didn’t have much capital but, with a staff of only four, they did have a singular vision--to outdo Kodak. Even through the rosiest of glasses, this would not appear a feasible proposition. It’s a scenario that makes David versus Goliath look like a fair fight.

Marketing In some ways marketing is as old as civilization itself. You may have seen films based in ancient Greece or Rome with images of bustling market stalls and traders actively engaged in persuasive communications. Of course these traders would not have called their activities marketing and their activities may seem far removed from someone ordering airline tickets via a website.