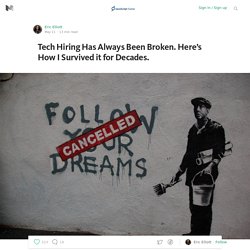 Here’s How I Survived it for Decades. Sahat Yalkabov recently ranted about how broken tech hiring is driving him away from coding interviews. He echoed many of my own frustrations about both sides of the process, but more importantly, he shined a light on the fact that poor hiring practices aren’t simply bad for the company doing the hiring, but the whole community. How is Hiring Broken? Interviews are too random and arbitrary, and fail to tell you what you need to know about the candidate.Companies pass on qualified candidates who would have served them very well, which can cause them to extend their search for months, and cost tens of thousands of dollars.Junior developers frequently have a hard time getting a foothold in the industry.Your company may be overpaying for too many senior developers, and not hiring enough junior developers.Candidates get frustrated and leave the industry.Companies have fewer good candidates to choose from. 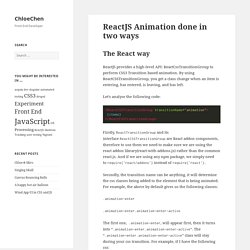 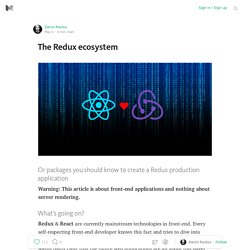 What’s going on? Redux & React are currently mainstream technologies in front-end. Every self-respecting front-end developer knows this fact and tries to dive into them to understand what they are and how to deal with them. The problem is that the process of changing developer’s mind to start thinking in React & Redux way isn’t actually smooth. Obviously, when we hear about React & Redux bunch, we begin to puzzle out exactly those two words. “Okay, I got it, — you said, — React builds my interfaces using components, Redux handles my data using the singleton data store, actions and reducer functions. Yes, you have! The truth is that interface building and data handling are not enough to create a real production application.

So, the gist is the following. Reusable components Routing. React.js Introduction For People Who Know Just Enough jQuery To Get By · React for Designers. Updates: Dec 13, 2015: Updated for React 0.14. 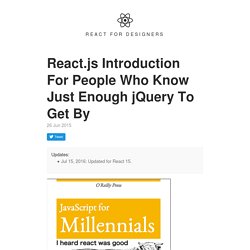 Also, added a link to React for Beginners, a comprehensive React tutorial by Wes Bos. I also heard React.js was good and recently spent some time playing with it. Now that I’m pretty comfortable with React, I decided to write a tutorial on this subject. Target Audience: People Who Know Just Enough jQuery to Get by Before I begin, I’d like to clarify who my target audience is. Zed Shaw, the author of “Learn Code the Hard Way” series, recently wrote an excellent blog post called Early v.s. I don’t want to make a similar mistake here. In this tutorial, I’m targeting the third group I mentioned: people who know just enough jQuery to get by. Designers who can do basic coding in HTML/CSS/jQuery. If you’re comfortable with JavaScript or any of the frontend frameworks like Backbone/Ember/Angular, this tutorial is NOT for you, and you’ll be very frustrated with my writing style.

Anyways, let’s get started! Time Estimate: 1 ~ 2 hours. Using React and jQuery Together · Oyster.com Tech Blog. 22 Mar 2016 by Alex In this post I’ll be covering some tips on how to use React and jQuery together in the same UI. 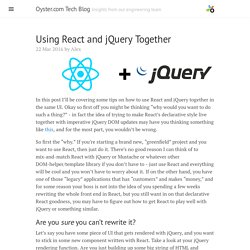 Okay so first off you might be thinking “why would you want to do such a thing?” - in fact the idea of trying to make React’s declarative style live together with imperative jQuery DOM updates may have you thinking something like this, and for the most part, you wouldn’t be wrong. So first the “why.” If you’re starting a brand new, “greenfield” project and you want to use React, then just do it. Are you sure you can’t rewrite it? What is hard to do using React.js compared to jQuery? - Quora.