The weirdest things about the US. Unsplash/Frank McKenna America is a wonderful country, but there are a few things it could improve.Blue Laws seem incredibly antiquated.The measurement system is bonkers. 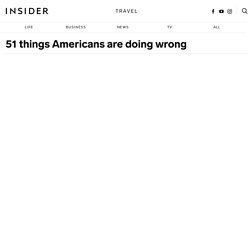 America is a wonderful country. From breathtaking natural wonders to incredible attractions, there's a lot that the US gets right. But boy, is there a lot it gets wrong. What's up with the giant gaps between bathroom stalls? As a European (I grew up in Germany, Austria, and France) who has lived in the US for 11 years, there are still a plethora of things that never cease to boggle my mind, as well as the minds of my foreign friends and relatives. Keep reading for 51 egregious mistakes the US is making. Why we should let our children fail. I became a parent and a secondary school teacher in the same year. 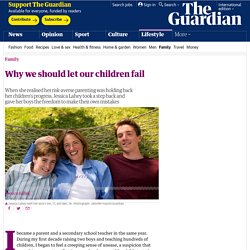 During my first decade raising two boys and teaching hundreds of children, I began to feel a creeping sense of unease, a suspicion that something was rotten. But it was only when my elder child started secondary school that my worlds collided and the source of the problem became clear to me: today’s overprotective, failure-avoiding parenting has undermined the competence, independence and academic potential of an entire generation. Over a decade of teaching, I’d seen my students descend in to a constant state of fear and trepidation, a state that spells disaster for learning.

When students are too afraid to take intellectual risks, too hesitant to raise their hand and take a chance on an idea that could change the course of class discussion, teachers can’t teach. Protect Your Kids From Failure. Here’s what we learn from psychology: What’s most reliably associated with success are prior experiences with success, not with failure. 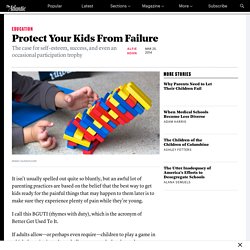 Although there are exceptions, the most likely consequence of having failed at something is that a child will come to see himself as lacking competence. And the result of that belief is apt to be more failure. All else being equal, a student who gets a zero is far more likely to give up (and perhaps act up) than to try harder. We may wish that a child who can’t seem to get on base, or spit out a list of facts from memory during a test, or coax anything more than a hideous shriek from his violin will react by squaring his shoulders, reciting the mantra of The Little Engine That Could, and redoubling his efforts until, gosh darn it, he turns things around.

But wishing doesn’t make it true. The most surprising things about America, according to a Silicon Valley engineer who moved from India 7 years ago. Top 10 Evidence Based Teaching Strategies. Most teachers care about their students’ results. 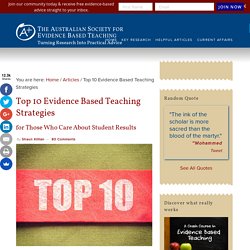 If you are reading this article, you are undoubtedly one of them. There is no doubt that teachers make a difference to how well their kids do at school. However, when you explore the thousands of research studies1 on the topic, it is apparent that some teaching strategies have far more impact than other teaching strategies do. Evidence Based Teaching Strategies Research shows that evidence based teaching strategies are likely to have the largest impact on student results. Cognitive Neuroscience Society » Blog Archive » Babies Learn Language Socially. 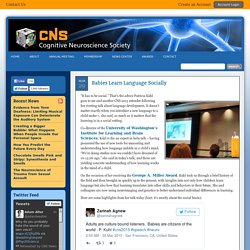 That’s the advice Patricia Kuhl gave to me and another CNS 2015 attendee following her riveting talk about language development. It doesn’t matter exactly when you introduce a new language to a child under 7, she said, as much as it matters that the learning is in a social setting. Co-director of the University of Washington’s Institute for Learning and Brain Sciences, Kuhl is the an expert in baby talk – having pioneered the use of new tools for measuring and understanding how language unfolds in a child’s mind. Center for Teaching & Learning. Active Learning Strategies help to initiate learners and instructors into effective ways to help everyone engage in activities based on ideas about how people learn. Multiple active learning strategies may be used in each of the active learning designs. Review an annotated list of active learning strategies. Edutopia.

Patricia Chen, a postdoctoral researcher at Stanford and the lead author of the study, says she often had students coming to her lamenting their poor test scores. "Many students have come to me after their exams trying to understand why they did not do as well as they had expected, despite their hard work,” she recalls. She suspected that the issue was that they lacked awareness of how ill-prepared they were—metacognitive awareness—and that led to the unexpectedly low scores.

They thought they understood the material better than they actually did. Nearly two decades ago, Cornell psychologists David Dunning and Justin Kruger conducted a landmark study looking at this perception gap. Language Learning Showdown: Rosetta Stone vs. Duolingo. Log In. Photo In-laws may be universally intimidating, but in some cultures, the deference paid them rises to a whole new level, at least linguistically. 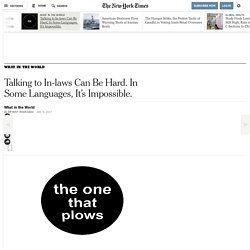 A geographically widespread practice known as avoidance speech, or “mother-in-law languages,” imposes strict rules on how one speaks — or doesn’t — to the parents of a spouse, with daughters-in-law typically bearing the brunt of such limits. In parts of Africa, Australia and , some societies restrict the words a person can say after marriage. Some cultures have even barred all direct communication with parents-in-law. Some married women who speak the Kambaata language of follow ballishsha, a rule that forbids them from using words that begin with the same syllable as the name of their father-in-law or mother-in-law. On Flipboard.

Secret Teacher: brilliant eccentrics are a dying breed in education. As I look around the staffroom I am struck by the fact that, among the piles of exercise books and unwashed coffee cups, there is an endangered species, dwindling to the point of extinction. 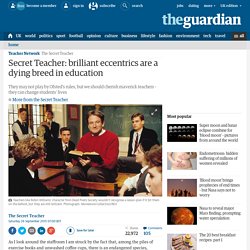 I’m not talking about the semi-corporate teachers who look like they’d be more at home in a boardroom than a classroom – they are flourishing. The threatened group I speak of is that most British breed: the eccentric. Everyone, surely, can look back to their school days and think of at least one teacher who would fall into this category. STEM Education Promotes Critical Thinking and Creativity: A Response to Fareed Zakaria. 7 Best Language Learning Apps and Websites. 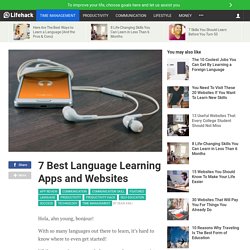 With so many languages out there to learn, it’s hard to know where to even get started! While no one knows exactly how many languages exist, there are several thousands of them (a portion of the Bible had been translated into 2,508 different languages). Just like our own ancestry, most languages belong into different families. Indo-European is the origin of most languages that we speak today, including Spanish, English, and Russian. Top 10 Websites to Learn a New Language Even If You're Too Busy. How come most people never reach fluency in a foreign language? 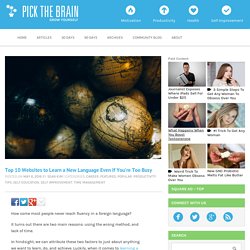 It turns out there are two main reasons: using the wrong method, and lack of time. In hindsight, we can attribute these two factors to just about anything we want to learn, do, and achieve. Why Learning Intentions Don&apos;t Necessarily Work. Archetype Examples. An archetype is an ideal example or model after which other things are patterned. 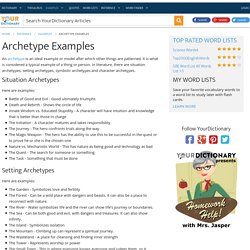 It is what is considered a typical example of a thing or person. In literature, there are situation archetypes, setting archetypes, symbolic archetypes and character archetypes. Situation Archetypes. A Wonderful App for Students to Showcase Their Learning. August 21, 2015 30hands is an excellent app to use with students in class. You can use it for a wide variety of purposes from creating demos and tutorials to crafting visually appealing presentations and videos. Students can use it to create multimedia productions showcasing their learning in the form of a slideshow with audio narration, or through an audio-enhanced image portfolios to mention but a few examples. Given its intuitive interface and simple layout, 30hands can be used with different age groups.

A Collection of Some of The Best Chromebook Apps for Teachers. August, 2015 One the occasion of the start of a new school year, Educational Technology and Mobile Learning is working on a series of posts aiming at providing teachers with a variety of educational resources specifically curated for teachers keen on effectively integrating technology in their instruction. Educational Technology and Mobile Learning: 22 Chrome Apps Every Teacher Should Know about. March 23, 2015 Over the last weekend, we spent sometime curating what we think are some of the best Chrome apps and extensions for teachers and students.Our selection is based on the reviews we have been posting here over the last couple of years and is also based on criteria such as popularity of the apps, its ratings...etc.

Of course the list is no way comprehensive and there are tons of other apps to be included here but for brevity and practicality purposes we limited our list to the titles featured below. Have a look and share with your colleagues. 1- Google Classroom “Classroom is a new tool in Google Apps for Education that helps teachers create and organize assignments quickly, provide feedback efficiently, and easily communicate with their classes. Classroom helps students organize their work in Google Drive, complete and turn it in, and communicate directly with their teachers and peers.” 5 Great Educational Resources for Modern Classrooms.

In the digital age, many innovative organizations have branched off into educational initiatives, and their timing couldn’t be better. Recognizing the need for visual literacy, digital citizenship practices, and guided ed-tech implementation, many of these organizations strive to offer our students and teachers versatile tools and the most rewarding experiences possible with them. Such educational resources are designed to appeal to both the teachers and students of modern digital classrooms.

52 Of The Best Apps For Your Classroom In 2015. Educational Technology and Mobile Learning: 10 Excellent New Educational Web Tools for Teachers. March 20, 2015 Here are some very useful educational web tools we have curated over the last few weeks. These are EdTech tools we came across through posts from other edubloggers. As is the case with previous posts in New EdTech Web Tools for Teachers, we only feature the recent trending tools which we think would be a valued addition to teachers technology toolkit. Educational Technology and Mobile Learning: Insights- A New Educational Tool for Creating Paperless Interactive Lessons. June 25, 2015 The popular educational app TinyTap has recently released a new tool called Insights. This is basically a data management tool to help teachers access real-time analytics on data related to classroom teaching such as which lessons students completed, how they scored on them and how they are improving.