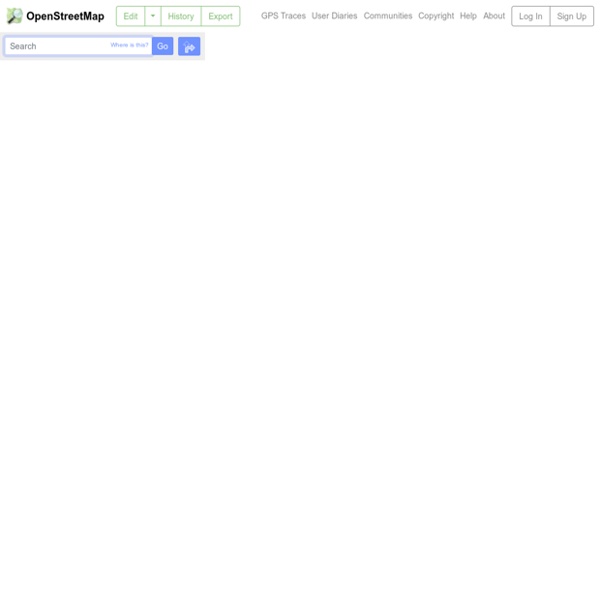 Where am I? Welcome to OpenStreetMap! OpenStreetMap is a map of the world, created by people like you and free to use under an open license. Hosting is supported by UCL, Bytemark Hosting and Imperial College London, and other partners. Learn More Start Mapping <div id="noscript"><p>You are either using a browser that does not support JavaScript, or you have disabled JavaScript. 300 km 100 mi © OpenStreetMap contributors ♥ Make a Donation Directions from hereDirections to hereAdd a note hereShow addressQuery featuresCentre map here

Earth Outreach Before You Begin In order to complete this tutorial, you will need some text, photo and video content to add to your tour. You can use your own text, photos and videos, or you can use the sample content provided by our friends at the Jane Goodall Institute (JGI). Just download the zip file below and extract the contents to a folder on your desktop. Tour_Builder_JGI_sample_content.zip (530k Zip file)

Melbourne crime interactive: Track the areas where bushfires have been deliberately lit A three-man arson rampage in Broadmeadows has pushed it to the top of the state list for bushfire offences over the past five years. The trio of teenagers from Dallas - two 18-year-old men and a 17-year-old boy - started 34 fires in the Dallas region between November last year and February this year. Five of the grass and scrub fires were lit within an hour of each other in January, but none of them managed to take hold and were extinguished within 15 minutes. A total of 325 charges were laid against the trio, including 102 for recklessly causing a bushfire.

Why all men should be able to read a map So here’s a quick refresher course: What is a map? Maps are simply an accurate 2-D rendering of the ground as seen from above, scaled down from life-size with symbols to show the landscape accurately including particular features such as roads, footpaths and landmarks. Learning compass points To understand maps you need to understand direction via the points of a compass: North, East, South and West. There are many rhymes to remember how these are positioned (‘Never Eat Shredded Wheat’ was my classroom one) but the easiest way is to imagine a clock face where north is at the top (12 o’clock), east is at 3, south is at 6 and west is at 9.

Corporate Profile About U. S. Steel Custom Google Maps Style Tool A tool for playing around with Google Maps colours and generating the styling code. The generated Google Maps code can be copied from the bottom of the page. Colours can be controlled with sliders below or by entering a hex value. Tags: api, custom, google maps, maps, styles World Migration Map - Data Visualization by Metrocosm This map shows the estimated net immigration (inflows minus outflows) by origin and destination country between 2010 and 2015. Blue circles = positive net migration (more inflows). Red circles = negative net migration (more outflows).

TRI and Superfund Environmental Maps TOXMAP classic provides an Advanced Search as well as the ability to save search results and to build custom regions to focus your search. It does not require Flash and is accessible to users with disabilities. No new features are planned. The beta version of TOXMAP is in active development.

40 Maps That Explain The Middle East Maps can be a powerful tool for understanding the world, particularly the Middle East, a place in many ways shaped by changing political borders and demographics. Here are 40 maps crucial for understanding the Middle East — its history, its present, and some of the most important stories in the region today. Middle East History See a Map of the World Revealing Each Country's Most Visited Website It's a Google Earth after all. At least according to a new map detailing each country's most visited websites. An impressive 62 countries count on Google, with Facebook coming in first for 50 other countries. Together, these two websites constitute true global Internet Empires--but we already kind of knew that. The map reveals much more about our global browsing habits (like, apparently, Yahoo is big in Japan). Created by Information Geographies, the Oxford Internet Institute's site for visualizing data about the web, the Age of Internet Empires map shows a challenge to Google/Facebook dominance by Baidu, the search engine in China.

Styling Google Maps Map Stylr is a new Google Maps API Styled Maps wizard that can help you create a unique style for your own Google Maps. Map Stylr includes the Styled Maps wizard and a showcase of styles created by users of the site. The Map Editor allows you to customize the presentation of the standard Google base maps, changing the visual display of such elements as roads, parks, and built-up areas. Instead of using the Map Editor tool you can use the Map Stylr 'showcase' to select from styles created by other map developers.