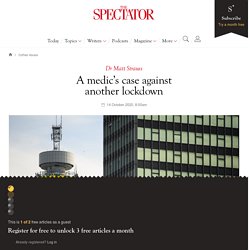 These words make me convinced that Covid-19 lockdowns are the wrong approach, and a growing number of doctors are on my side. Medical students throughout the West are taught the principles of beneficence and non-maleficence as pillars of medical ethics. In simple terms, they dictate that the likely benefits of our treatments ought to substantially outweigh their potential risks. In my practice, I prescribe medications like atorvastatin to lower cholesterol, or warfarin to thin the blood, because international, randomised, double-blind control trials have proven that their benefits far outweigh their risks. If I were to prescribe thalidomide (which causes birth defects) for morning sickness, or phen-phen (which causes heart problems) for weight loss, that would be unethical malpractice; their risks outweigh their benefits.

Luckily, we no longer have to talk about mathematical models. Covid: What the tier rules say about the split between science and politics. Support bubbles: How do they work and who is in yours? Subscribe to read. Tandfonline. Tory rebels fire warning shot as 42 MPs vote against stricter Covid measures. Conservative rebels fired a warning shot at the government as 42 MPs voted against stricter Covid-19 curbs, amid angry scenes in the Commons, where Matt Hancock criticised lockdown sceptics. 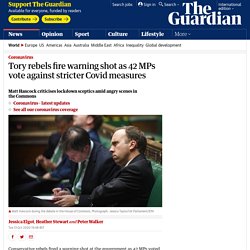 Tory rebels organised a symbolic vote against one of six restrictions approved by MPs on Tuesday night. The King Who Ruined England. The Peasants' Revolt Of 1381 - Part One (Medieval History Documentary) Explained: The strange journey of Oliver Cromwell's Head. The English Civil Wars - A People Divided - Full Documentary - Ep1. 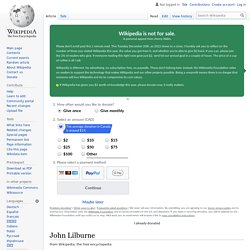 He coined the term "freeborn rights", defining them as rights with which every human being is born, as opposed to rights bestowed by government or human law.[1] In his early life he was a Puritan, though towards the end of his life he became a Quaker. His works have been cited in opinions by the United States Supreme Court.[2] Early life[edit] John Lilburne was the son of Richard Lilburne, a landowner of estates at Thickley Punchardon and elsewhere in County Durham.[3] He was probably born in Sunderland,[4] but the exact date of his birth is unknown; there is some dispute as to whether he was born in 1613, 1614, or 1615.

His father Richard Lilburne was the last man in England to insist that he should be allowed to settle a legal dispute with a trial by combat. Unlicensed publishing[edit] "Freeborn John"[edit] Root and Branch petition. Petition present to English Parliament in 1640. 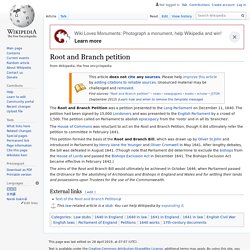 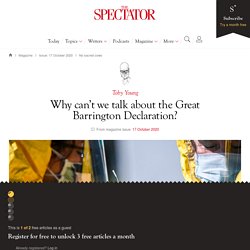 This is a petition started by three scientists on 4 October calling for governments to adopt a policy of ‘focused protection’ when it comes to Covid-19. They believe those most at risk should be offered protection — although it shouldn’t be mandatory — and those not at risk, which is pretty much everyone under 65 without an underlying health condition, should be encouraged to return to normal. In this way, the majority will get infected and then recover, gradually building up herd immunity, and that in turn will mean the elderly and the vulnerable no longer have to hide themselves away. According to these experts, this is the tried and tested way of managing the risk posed by a new infectious disease, dating back thousands of years. ‘Drill and kill’? English schools turn to scripted lessons to raise standards. In a converted office block in an unprepossessing corner of west London, a year 10 class is working with intense concentration. 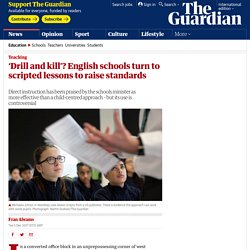 The walls are grey and virtually bare; on the whiteboard is a cartoon-style story about a pilot marooned on a desert island. At all times eyes are either down or focused on the school’s deputy head of English, Sarah Cullen. It’s as if there’s no need for any other visual stimulation, for she’s a one-woman whirlwind: the lesson is conducted at a frenetic pace; questions are rapid-fire and answered with an instant sea of hands. 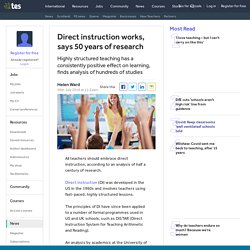 Direct instruction (DI) was developed in the US in the 1960s and involves teachers using fast-paced, highly structured lessons. The principles of DI have since been applied to a number of formal programmes used in US and UK schools, such as DISTAR (Direct Instruction System for Teaching Arithmetic and Reading). Mercer.DevelopingDialoguepdf. Crimewatch UK Solved 25/07/2007. The Twisted Games of Robert Hansen. Crimewatch uk 3 unsolved child murders 1997,1994,1995.

Crimewatch File - The Iceman (1996) Crimewatch File: Murder Without Motive 13 October 1998[ What is the Bayeux Tapesrty about - The story of the Tapestry. In 1064, Harold’s ship sails towards the coast of Normandy. 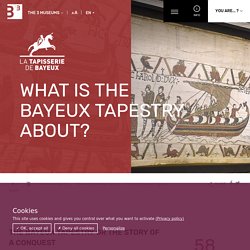 After many difficulties, he sends a message to William Duke of Normandy: the King of England has designated him as his heir to the throne. When the old king dies, Harold has himself crowned instead of the Duke of Normandy. Hearing this news, William decides to cross the Channel in 1066 to reclaim his throne… On a September night in 1066, several hundred ships set sail, with seven thousand men and about two thousand horses on board. Among the boats is the ducal ship given by the duchess Matilda: the Mora stands out with a lantern blessed by the Pope at the top of its mast. On 14 October 1066, the decisive battle between Norman and Anglo-Saxon troops begins. William the Conqueror's Early Defences. The War that Changed the English Language - Mini-Wars #3. Knowledge Organisers. Specify subject knowledge in meticulous detail What’s the difference between a knowledge curriculum and other curricula? 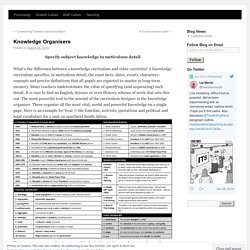 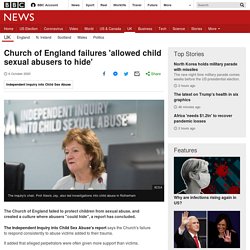 The Independent Inquiry into Child Sex Abuse's report says the Church's failure to respond consistently to abuse victims added to their trauma. It added that alleged perpetrators were often given more support than victims. SPFL & Scottish FA: Having no fans is 'political, rather than clinical' The delay in allowing fans to return to stadiums in Scotland is "political, rather than clinical", say two of the country's top football administrators. Scottish FA vice-president Mike Mulraney made the claim on BBC Radio Scotland - and was supported by SPFL chief executive Neil Doncaster. Mulraney said it is "fair to ask the Scottish government to reconsider" its stance on playing in empty stadiums.

"I listen to the science and it does seem counter-intuitive," he said. "I think it is driven by science, but do you think that sitting one metre away from somebody eating in a restaurant has less risk than sitting two metres away from someone in a stadium with a mask on? " Doncaster will discuss the matter with sports minister Joe Fitzpatrick on Monday and said that "it often feels football does not get a fair rub of the green".

"The UK Government does not allow fans into Premier League or EFL grounds in the fresh air," he said. British Gymnastics mistreatment allegations: Athletes cannot 'heal', says Aly Raisman. Gymnasts will not be able to "heal" if an investigation into allegations of mistreatment in British Gymnastics takes a long time, says Aly Raisman. American Raisman, 26, is a survivor of the biggest abuse scandal in US gymnastics history. Several British gymnasts have recently alleged there has been a culture of mistreatment in the sport. GB Olympic bronze medallist Amy Tinkler said she "would give up that medal to not have gone through what I did". Use a Learning Theory: Behaviorism. The Jigsaw Method. The Question Matrix. @TeacherToolkit In 2010, Ross Morrison McGill founded @TeacherToolkit from a simple Twitter account through which he rapidly became the 'most followed teacher on social media in the UK'.

In 2015, he was nominated as one of the '500 Most Influential People in Britain' by The Sunday... Read more about @TeacherToolkit. Questioning. Why we’re still getting feedback wrong. When I started teaching, back in the early years of the new millennium, Assessment for Learning was all the rage. It dominated most Inset days and CPD sessions for the first couple of years of my career and one message kept on being repeated: “Pupils need the opportunity to do something with the feedback you give them. " At this point in the murky and confused history of teaching, feedback only really meant marking, and the focus was on moving away from “flick and tick” and summative comments (“good”, “well done”, “try harder”, and of course the old cliche, “see me”) and towards the kind of actions that told the pupil how to improve the work. Sadly, we were still working in a system driven by summative assessment and targets, and so Assessment for Learning largely seemed to lead to comments like “To move from a level 4 to a level 5 you should…” or “Your target is a C so you need to…”.

Read more: Looking back now, I wonder how much has really changed. PGDE/CE - The Secret to your QTS File - Not Just a Biology Teacher. If you’ve considering a PGCE/DE in education I’m sure you are aware that in order to gain Qualified Teacher Status you have to provide evidence that your practice meets all of the Teaching Standards. CLT 2.0 – The Teacher Scaffolding Effects. Cognitive Load Theory is increasingly impacting on teachers. Twitter. Film: What's the wisdom on...Enquiry questions (Part 1) By Dr Katharine Burn, Helen Snelson and Christine Counsell, published 29th June 2020. Background to Rosenshine - Google Slides. The Jigsaw Classroom. Elliot Aronson is currently Professor Emeritus at the University of California in Santa Cruz. 5 ways to use retrieval tests to make knowledge stick - History Resource Cupboard - lessons and resources for schools. Edu practices 07 eng. Use a Learning Theory: Behaviorism. Wagoll ideas volume 1. Direct instruction. Direct instruction. Lesson Planning 101: 6 Easy Steps for Effective Lesson Planning.