The end of time the death of man 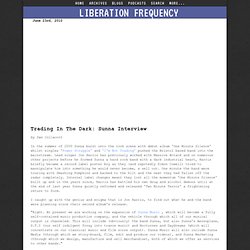 Lead singer Jon Harris has previously worked with Massive Attack and on numerous other projects before he formed Sunna a hard rock band with a dark industrial heart, Harris briefly became a record label poster boy as they (and repotedly Simon Cowell) tried to mannipulate him into something he would never become, a sell out. One minute the band were touring with Smashing Pumpkins and backed to the hilt and the next they had fallen off the radar completely. Maynard James Keenan. Maynard James Keenan fronts Tool, the only multi-platinum art-metal band whose members even its fans would have trouble picking out of a lineup. 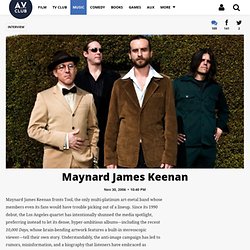 Since its 1990 debut, the Los Angeles quartet has intentionally shunned the media spotlight, preferring instead to let its dense, hyper-ambitious albums—including the recent 10,000 Days, whose brain-bending artwork features a built-in stereoscopic viewer—tell their own story. Understandably, the anti-image campaign has led to rumors, misinformation, and a biography that listeners have embraced as open-source code, and Keenan couldn't be happier about it. But there's more to the 42-year-old singer than his enigmatic stage presence: He's also a pundit, a father, a winemaker, a former Army cadet, and an underappreciated funnyman with a Mr. News.com: Maynard James Keenan: Not Yet A Legend, Not Yet Dead. -- by Kurt Loder Maynard James Keenan is an even more unusual guy than you may have suspected. 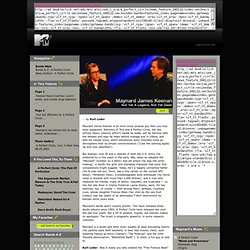 Admirers of Tool and A Perfect Circle, the two artfully heavy (heavily artful?) Bands he leads, will be familiar with the dresses and wigs he hides behind onstage and in videos, and with his insular lyrics, which sometimes seem intended more as atmosphere than as simple communication ("Cast the calming apple/ Up and over satellites"). But Keenan, now 39 and a veteran of both the U.S. Army (he soldiered for a few years in the early '80s, when he adopted the "Maynard" moniker on a whim) and art school (he was into print-making), is hardly the grim and alienated character that early Tool compositions might suggest. Maynard's bands aren't exactly prolific: Tool have released three studio albums since 1993; A Perfect Circle have released two over the last four years. 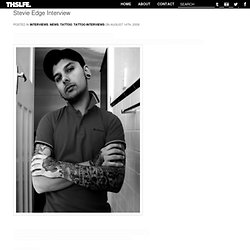 Stevie is a straight up fucking wizard at what he does, and a cool as fuck dude! Check out what he had to say! First things first dude, thank you so much for your time, whats cracking? For those who don’t know, can you tell us a bit about yourself? I AM STRAIGHT EDGE — ‪Rise Against - The Good Left Undone‬‏ Prosopagnosia. Animation of the fusiform area, the area damaged in prosopagnosia. 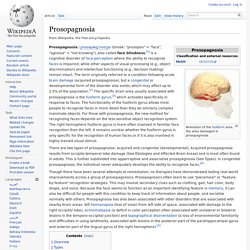 Prosopagnosia /ˌprɒsəpæɡˈnoʊʒə/ (Greek: "prosopon" = "face", "agnosia" = "not knowing"), also called face blindness,[1] is a cognitive disorder of face perception where the ability to recognize faces is impaired, while other aspects of visual processing (e.g., object discrimination) and intellectual functioning (e.g., decision making) remain intact. The term originally referred to a condition following acute brain damage (acquired prosopagnosia), but a congenital or developmental form of the disorder also exists, which may affect up to 2.5% of the population.[2] The specific brain area usually associated with prosopagnosia is the fusiform gyrus,[3] which activates specifically in response to faces. The functionality of the fusiform gyrus allows most people to recognize faces in more detail than they do similarly complex inanimate objects. 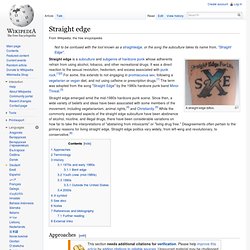 Straight edge emerged amid the mid-1980s hardcore punk scene. Since then, a wide variety of beliefs and ideas have been associated with some members of the movement, including vegetarianism, animal rights,[4] and Christianity.[5] While the commonly expressed aspects of the straight edge subculture have been abstinence of alcohol, nicotine, and illegal drugs, there have been considerable variations on how far to take the interpretations of "abstaining from intoxicants" or "living drug free.

" Disagreements often pertain to the primary reasons for living straight edge. Straight edge politics vary widely, from left-wing and revolutionary, to conservative.[6] Approaches[edit] Psychopathy and Antisocial Personality Disorder: A Case of Diagnostic Confusion - Psychiatric Times. Hare Psychopathy Checklist - Geeks' Lounge. I scored 19 :) With this test someone can find out if he/she has psychopatic tendensies. 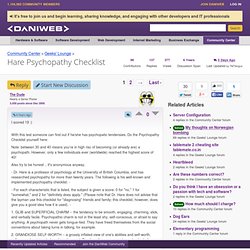 ‪Gallows - In The Belly Of A Shark (video)‬‏ ‪Gallows - Misery‬‏ ‪Clint Mansell - Death is the Road to Awe.‬‏ Diane Arbus. Diane Arbus (/diːˈæn ˈɑrbəs/; March 14, 1923 – July 26, 1971) was an American photographer and writer noted for black-and-white square photographs of "deviant and marginal people (dwarfs, giants, transgender people, nudists, circus performers) or of people whose normality seems ugly or surreal".[2] Arbus believed that a camera could be "a little bit cold, a little bit harsh" but its scrutiny revealed the truth; the difference between what people wanted others to see and what they really did see – the flaws.[3] A friend said that Arbus said that she was "afraid ... that she would be known simply as 'the photographer of freaks'", and that phrase has been used repeatedly to describe her.[4][5][6][7] Personal life[edit] Diane and Allan Arbus separated in 1958, and were divorced in 1969.[15] 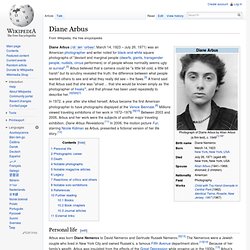 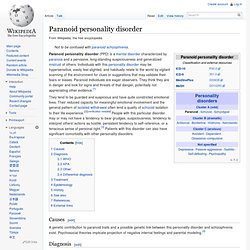 Individuals with this personality disorder may be hypersensitive, easily feel slighted, and habitually relate to the world by vigilant scanning of the environment for clues or suggestions that may validate their fears or biases. Paranoid individuals are eager observers. They think they are in danger and look for signs and threats of that danger, potentially not appreciating other evidence.[1] 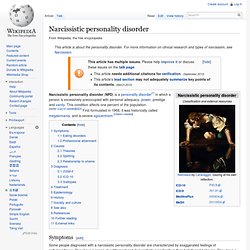 They have a sense of entitlement and demonstrate grandiosity in their beliefs and behavior. They have a strong need for admiration, but lack feelings of empathy.[4] Symptoms of this disorder, as defined by the DSM-IV-TR, include:[1] Expects to be recognized as superior and special, without superior accomplishmentsExpects constant attention, admiration and positive reinforcement from othersEnvies others and believes others envy him/herIs preoccupied with thoughts and fantasies of great success, enormous attractiveness, power, intelligenceLacks the ability to empathize with the feelings or desires of othersIs arrogant in attitudes and behaviorHas expectations of special treatment that are unrealistic.

Obsessive–compulsive personality disorder. This is a distinct disorder from obsessive-compulsive disorder (OCD), and the relation between the two is contentious. Both may share outside similarities — rigid and ritual-like behaviors, for example. Hoarding, orderliness, and a need for symmetry and organization are often seen in people with either disorder. But attitudes towards these behaviors by people afflicted with either of them differ: for people with OCD, for example, these behaviors are unwanted and seen as unhealthy, the product of anxiety-inducing and involuntary thoughts; for people with OCPD, on the other hand, they are experienced as rational and desirable, being the result of, for example, a strong adherence to routines, or a natural inclination towards cautiousness, or a desire to achieve perfection.

Some researchers and theorists continue to use its criteria. It has an official code number, 301.90.[1] Passive–aggressive behavior. Passive-aggressive behavior is the indirect expression of hostility, such as through procrastination, sarcasm, hostile jokes, stubbornness, resentment, sullenness, or deliberate or repeated failure to accomplish requested tasks for which one is (often explicitly) responsible. For research purposes, the DSM-IV describes passive-aggressive personality disorder as a "pervasive pattern of negativistic attitudes and passive resistance to demands for adequate performance in social and occupational situations". Concept in different areas[edit] In psychology[edit] In psychology, passive-aggressive behavior is characterized by a habitual pattern of passive resistance to expected work requirements, opposition, stubbornness, and negativistic attitudes in response to requirements for normal performance levels expected of others.

Temporal lobe epilepsy. Lobe (anatomy) In practice, this division can be somewhat subjective. For example, it can be difficult to precisely distinguish between an interlobar duct and an interlobular duct. Furthermore, the distinction is not universally accepted and some sources simply consider a lobule to be a small lobe.

Psychosis. Psychopathology. Psychopathology[a] is the scientific study of mental disorders, including efforts to understand their genetic, biological, psychological, and social causes; effective classification schemes (nosology); course across all stages of development; manifestations; and treatment. As the study of psychiatric disorders[edit] The scientific discipline of psychopathology was founded by Karl Jaspers in 1913, whose object of study were "mental phenomena". Asperger syndrome. Psychopathy. Sociopathy. Profile of the Sociopath.