Erowid. The relative dangers of drugs: What the science says. What cannabis actually does to your brain. Pot Smokers Might Not Turn Into Dopes After All. Cannabis rots your brain — or does it? 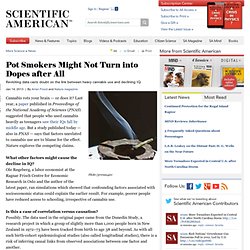 Last year, a paper published in Proceedings of the National Academy of Sciences (PNAS) suggested that people who used cannabis heavily as teenagers saw their IQs fall by middle age. But a study published today — also in PNAS — says that factors unrelated to cannabis use are to blame for the effect. Nature explores the competing claims. What other factors might cause the decline in IQ? Ole Røgeberg, a labor economist at the Ragnar Frisch Centre for Economic Research in Oslo and the author of the latest paper, ran simulations which showed that confounding factors associated with socioeconomic status could explain the earlier result. Is this a case of correlation versus causation? Past research on the Dunedin cohort shows that individuals from backgrounds with low socioeconomic status are more likely than others to begin smoking cannabis during adolescence, and are more likely to progress from use to dependence.

'I Wanted To Live': New Depression Drugs Offer Hope For Toughest Cases : Shots - Health Blog. Hide captionChris Stephens, 28, who has been battling depression all of his life, plays with his dogs at home in Concord, Calif., on Friday. 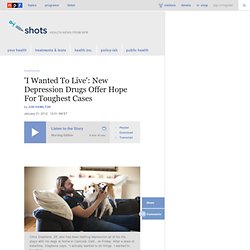 After a dose of ketamine, Stephens says, "I actually wanted to do things. Scientists explain how ketamine vanquishes depression within hours. Many chronically depressed and treatment-resistant patients experience immediate relief from symptoms after taking small amounts of the drug ketamine. 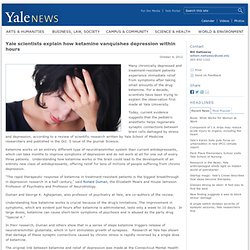 For a decade, scientists have been trying to explain the observation first made at Yale University. Today, current evidence suggests that the pediatric anesthetic helps regenerate synaptic connections between brain cells damaged by stress and depression, according to a review of scientific research written by Yale School of Medicine researchers and published in the Oct. 5 issue of the journal Science. PTSD and MDMA Therapy - Medical Uses of Ecstasy. Pure Ecstasy Is Safe, Canadian Doctor Says, But Don't Buy 'E' On The Street : Shots - Health Blog. Ecstasy to be used in Canadian study into post-traumatic stress disorder. Exactly a century after ecstasy was first patented, Health Canada has approved the drug’s import for the first Canadian study using the illegal substance in trauma survivors’ therapy. 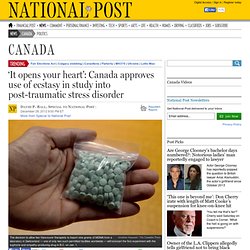 Exploring therapeutic effects of MDMA on post-traumatic stress. It costs about $2,000 to buy an ounce of the illegal drug, the therapist said — enough for roughly 150 doses. 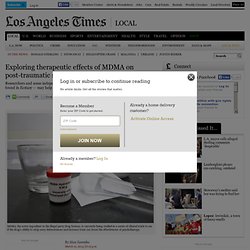 She pays her longtime dealer in cash; he gives her a Ziploc bag of white powder. Back home, she scoops the contents into clear capsules. She calls it "the medicine"; others know it as MDMA, the active ingredient in the party drug Ecstasy. MDMA has been banned by the federal government since 1985 as a dangerous recreational drug with no medical value. LSD 'helps alcoholics to give up drinking' 8 March 2012Last updated at 21:44 ET. 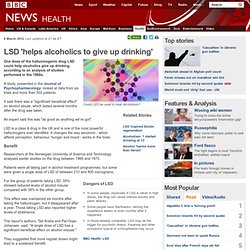 How Psychedelic Drugs Can Help Patients Face Death. Single dose of 'magic mushrooms' hallucinogen may create lasting personality change, study suggests. A single high dose of the hallucinogen psilocybin, the active ingredient in so-called "magic mushrooms," was enough to bring about a measurable personality change lasting at least a year in nearly 60 percent of the 51 participants in a new study, according to the Johns Hopkins researchers who conducted it. 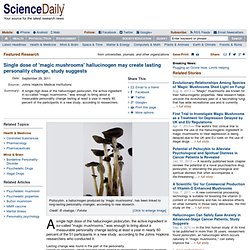 Lasting change was found in the part of the personality known as openness, which includes traits related to imagination, aesthetics, feelings, abstract ideas and general broad-mindedness. Changes in these traits, measured on a widely used and scientifically validated personality inventory, were larger in magnitude than changes typically observed in healthy adults over decades of life experiences, the scientists say. Researchers in the field say that after the age of 30, personality doesn't usually change significantly. "Normally, if anything, openness tends to decrease as people get older," says study leader Roland R. Marijuana Compound Treats Schizophrenia with Few Side Effects: Clinical Trial. A compound found in marijuana can treat schizophrenia as effectively as antipsychotic medications, with far fewer side effects, according to a preliminary clinical trial. 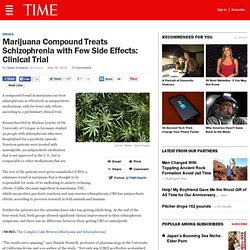 Researchers led by Markus Leweke of the University of Cologne in Germany studied 39 people with schizophrenia who were hospitalized for a psychotic episode. Nineteen patients were treated with amisulpride, an antipsychotic medication that is not approved in the U.S., but is comparable to other medications that are. The rest of the patients were given cannabidiol (CBD), a substance found in marijuana that is thought to be responsible for some of its mellowing or anxiety-reducing effects. Unlike the main ingredient in marijuana, THC, which can produce psychotic reactions and may worsen schizophrenia, CBD has antipsychotic effects, according to previous research in both animals and humans.

Neither the patients nor the scientists knew who was getting which drug. (MORE: The Complex Link Between Marijuana and Schizophrenia) Mind-altering drug could offer life free of heroin - life - 22 August 2013. Read full article. 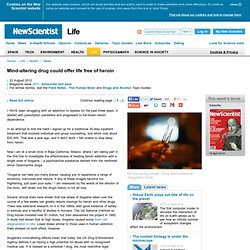 IS ALCOHOL A GATEWAY DRUG? Giving Up The Green Bitch: Graham Hancock at TEDxWhitechapel. Are Psychiatric Medications Making Us Sicker? - The Chronicle Review. By John Horgan. 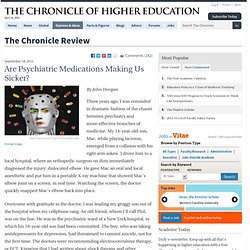 Heroes of Uncertainty. We’re living in an empirical age. Psychiatry Now Admits It's Been Wrong in Big Ways - But Can It Change? (Photo: Steve Snodgrass / Flickr)When I interviewed investigative reporter Robert Whitaker in 2010 after the publication of his book Anatomy of an Epidemic: Magic Bullets, Psychiatric Drugs, and the Astonishing Rise of Mental Illness in America, he was not exactly a beloved figure within the psychiatry establishment. Whitaker had documented evidence that standard drug treatments were making many patients worse over the long term, and he detailed the lack of science behind these treatments. McMaster University Researchers: Anti-Depressants Likely Do More Harm Than Good. Source: McMaster Daily News Commonly prescribed anti-depressants appear to be doing patients more harm than good, say researchers who have published a paper examining the impact of the medications on the entire body.

“We need to be much more cautious about the widespread use of these drugs,” said Paul Andrews, an evolutionary biologist at McMaster and lead author of the article, published in the online journal Frontiers in Psychology. “It’s important because millions of people are prescribed anti-depressants each year, and the conventional wisdom about these drugs is that they’re safe and effective.”

Andrews and his colleagues examined previous patient studies into the effects of anti- depressants and determined that the benefits of most anti-depressants, even taken at their best, compare poorly to the risks, which include premature death in elderly patients. What the researchers found is that anti-depressants have negative health effects on all processes normally regulated by serotonin.

His output includes 20 books, 150 peer-reviewed papers and 200 other published works.