Google. YouTube. FACEBOOK. Tumblr. Gravatar. The 101 Most Useful Websites on the Internet. Here are the most useful websites on the Internet that will make you smarter, increase productivity and help you learn new skills. These incredibly useful websites solve at least one problem really well. And they all have cool URLs that are easy to memorize thus saving you a trip to Google. Also see: The Best Android Apps Also see: The Best Mac Apps and Utilities seatguru.com – consult this site before choosing a seat for your next flight.webmakerapp.com — an offline playground for building web projects in HTML, CSS and JavaScript. See: The Most Useful Tools for Programmers Also see: The Best Add-ons for Gmail, Docs and Sheets whereami — find the postal address of your current location on Google maps.sway.com — create and share interactive reports, newsletters, presentations, and for storytelling. 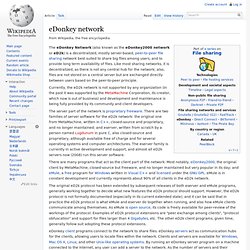 Like most sharing networks, it is decentralized, as there is not any central hub for the network; also, files are not stored on a central server but are exchanged directly between users based on the peer-to-peer principle. Currently, the eD2k network is not supported by any organization (in the past it was supported by the MetaMachine Corporation, its creator, which now is out of business) and development and maintenance is being fully provided by its community and client developers. There are many programs that act as the client part of the network.

The original eD2k protocol has been extended by subsequent releases of both eserver and eMule programs, generally working together to decide what new features the eD2k protocol should support. Features[edit] Are any of these the Web's next big thing? Prezi - Ideas matter. Onswipe. Imagine waiting for the train while picking out your groceries from a display case filled with products identical in size, scale and color to really grocery store shelves. 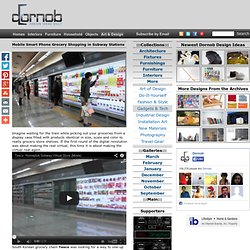 If the first round of the digital revolution was about making the real virtual, this time it is about making the virtual real again. South Korean grocery chain Tesco was looking for a way to one-up their major competitor – impossible to do in terms of physical shops due to a lack of actual stores; hence, they turned toward the world wide web with a combination of mobile phone and QR code technologies. Modernizr. Yahoo! Bing. Netflix. Le Site du Zéro. Trans-Atlantic Bandwidth Crunch coming. During the dot-com boom, so many undersea cable delivering the Internet traversed the bottom of the ocean between the U.S. and Europe that bandwidth prices plummeted and providers of submarine cables filed for bankruptcy. 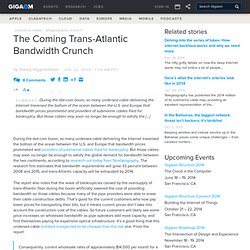 But those cables may soon no longer be enough to satisfy the global demand for bandwidth between the two continents, according to research out today from TeleGeography. The research firm estimates that bandwidth requirements will grow 33 percent between 2008 and 2015, and trans-Atlantic capacity will be exhausted by 2014. The report also notes that the wave of bankruptcies caused by the oversupply of trans-Atlantic fiber during the boom artificially lowered the cost of providing bandwidth on those cables because many of the pipe providers were able to erase their cable construction debts. That’s good for the current customers who now pay lower prices for transporting their bits, but it means current prices don’t take into account the construction cost of the cables. Lorem Ipsum - All the facts - Lipsum generator. Social Media App Lets You Live Vicariously Through Friends' Experiences. Vycarious, a new social-media app that is available for iOS, lets you create, follow and comment on friends' experiences, ranging from a two-week vacation to handcrafting a dinner table. 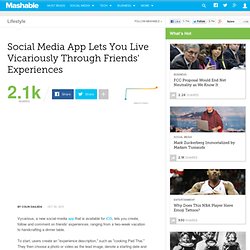 To start, users create an "experience description," such as "cooking Pad Thai. " They then choose a photo or video as the lead image, denote a starting date and time, and include hashtags to make their experience searchable. After that, users can upload posts, videos, images and other media until their experience ends. However, friends can still write comments even after users hit the end button to signal that their experience is over.