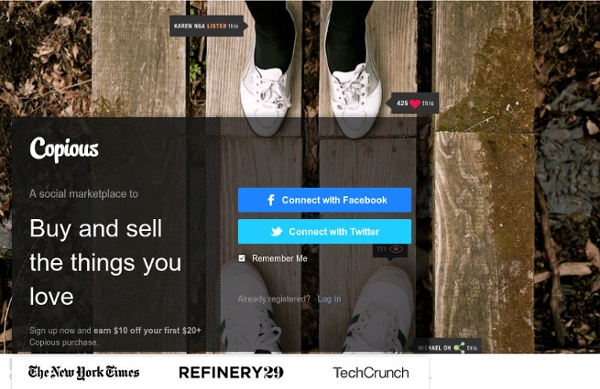 Martview - Unique Reading Experience - FREE Download! PriceGrabber.com - Smart Shopping Anytime, Anywhere 101 Apps for Your Web App Startup Toolbox With the multitude of web applications available today, it can be difficult choosing, let alone finding, an application that fits your needs and wants. There are so many fantastic apps available, many of which are bound to be beneficial for you and/or your business. From mind mapping, design and development to collaboration, project tracking and accounting; this roundup of 101 fantastic web apps for startups and businesses are sure to reduce operating costs and increase both productivity and efficiency. Mind Mapping mindmeister mindmeister mindmeister helps you move your web app ideas from the napkin to a more tangible and sensible form. Mindjet Mindjet Mindjet is a great mind mapping app and can be integrated with Microsoft Sharepoint server. XMind XMind “Mind mapping and brainstorming software, awards winner, open source, free download, compatible with Freemind/MindManager.” Design inPreso inPreso inPreso is a wireframing web app that comes in handy when you get an idea for a web app. Pencil 5pm

Customer Loyalty And Rewards Platform For Local Businesses Belly Raises $10M From Andreessen Horowitz Chicago-based Belly, a startup that is a fast-growing contender in the local business customer loyalty and rewards space, has raised $10 million in Series B funding from Andreessen Horowitz. The company also announced that Andreessen Horowitz partner Jeff Jordan, former chairman and CEO of OpenTable and former president of PayPal, will join the Board. This latest round of funding adds to a seven-figure round raised by the startup from Lightbank, the venture firm founded by Groupon co-founders Eric Lefkofsky and Brad Keywell. Belly wants to reinvent customer loyalty rewards through gamification, digital check-ins and a iPad setup for businesses. But the startup has a slightly different take on how to achieve this. Merchants pay a monthly subscription for unlimited Belly cards to hand out to customers, in-store marketing materials and secure access to customer data that reveals sales, points and redemption data, as well as insights into foot traffic and card usage patterns.

25 Free Portable Programs For Designers and Web Developers | Cre Being a designer or may be even being a web designer it can be very expensive in order to purchase the best design application . This article is a short but sweet compilation of 25 Free Portable Programs For Designers and Developers working on a shoe string budget as well as working on the fly. 1. Inkscape supports many advanced SVG features (markers, clones, alpha blending, etc.) and great care is taken in designing a streamlined interface. 2. The GIMP (GNU Image Manipulation Program) is a freely distributed program for such tasks as photo retouching, image composition and image authoring. 3. Blender is an integrated 3D creation software suite.It lets users create high quality 3D graphics, movies and replay real-time, interactive 3D content. 4. With a wealth of tools and more than 40 effects at your fingertips, there’s virtually no limit to the icons you can create. 5. Activepixels is a neat full-featured photo editor. 6. 7. 8. 9. 10. 11. 12. 13. 14. 15. 16. 17. 18. 19. 20. 21. 22. 24.

Dealupa: The best daily deals in one place! 20 Apps to Organize Your Thoughts | Men With Pens I always did like those posts that list a bunch of apps and tools I’d never heard of. I’ve found some really great apps that way. But no one’s ever bothered to offer us one of those “check these out!” posts – until today. Please welcome today’s guest poster, James Adams, and his collection of apps to organize thoughts. (We could all use more of that, eh!) Everyone these days is busy. The Internet is home to many tools that will assist you in saving your favorite websites, keeping track of your appointments, making mind maps, taking notes and creating notes to keep you on track. 1. Our friends at Google have developed this application to assist you in collecting notes and information from the Internet. 2. This tool is ideal if you find yourself too occupied with something to take notes. 3. This helpful application is a management tool that allows you to store and access your content from anywhere. 4. 5. 6. 7. This is a desktop note-taking app for Linux and Unix users. 8. 9. 10. 11. 12.

Edocr Integrates With Zendesk To Allow Embedded Documents It’s been a few years since edocr appeared on the scene to allow people to share, edit and organise documents, not unlike Slideshare. To be honest I thought they’d disappeared but it turns out they are out of the startup ‘trough of despondency’ and getting somewhere. Founder CEO Manoj Ranaweera tells me they now have over 26,000 users and are growing at 33% monthly. They’ve also now integrated with customer service giant Zendesk. Using edocr with Zendesk means you can now embed documents into your Zendesk forums or in tickets with a drag and drop interface without having to update links to a document or having outdated information presented customers. Todd Revolt, Director, Business Development of Zendesk says, the integration with edocr.com makes adding customer service documents to forums much easier.

CircleMe Lets You Plant – And Find – Virtual Items On Locations There are one or two apps which allow you to ‘plant’ virtual objects in a location allowing others to pick them up later on (Pinterest for location anyone?). Everplaces literally just launched, Stikinotes and Pinwheel have yet to launch. But CircleMe comes out of a six months closed beta today to try and prove it’s different than the others. Launching with a website, an iPhone app and $2.5 million in funding from VC firm Innogest Capital, this social network lets users geo-tag a city to trigger alerts when you are near something you’ve said you already like on another social network. Users “plant” a song, a book, a movie, a venue, a famous person, you name it, along with an associated message for others to enjoy. CircleMe has also pre-populated the database with close to 1 million items to “like”, and another 11 million to access via API connections with other networks. Whatever the case, the team looks strong. The company has a staff of 11, with offices in London and Milan.

dealBoard DealBoard For iPhone Finds Offers You Like, So You Can Kill The Daily Deal Emails DealBoard, a recently launched iPhone app from Seattle and London-based nFluence Media, has just emerged as a new player in the crowded “daily deals” space. But this app isn’t yet another Groupon clone, it’s a daily deal aggregator. However, what makes dealBoard unique – and why the company has $3 million in funding – is how the app goes about aggregating those deals for you. Instead of just rounding up a list of all the deals in the area, dealBoard personalizes the experience based on your interests. With dealBoard, you don’t have to create an account, hand over your email address, provide your phone number, or give up any other personal information to the company. In practice, this consists of a visual interface where brands’ logos are presented to you as thumbnails which you swipe up or down to indicate your interest. Afterwards, the app builds up a list of deal recommendations for you, based on those interests.

Reply Relaunches MerchantCircle As A More Consumer-Focused Merchant Marketplace As we reported last year, Reply acquired online marketing network for small business owners MerchantCircle. Merchant Circle which provides a business directory for merchants in smaller towns and currently lists over a million small businesses has long targeted merchants in small locales versus catering towards the consumers, as sites like Yelp and CitySearch do. Today, Reply is relaunching MerchantCircle has a more consumer-focused destination. Basically, the newly redesigned site allows consumers to find qualified providers in their local area, receive quotes and find expert advice, while giving merchants tools for servicing their local markets. Consumers can search for and find providers across all business categories, including home repair and improvement; health and beauty; financial and professional services; construction and real estate services; restaurants; and more. Currently the site has more than 1.2 million active member merchants.

Shipping & Luggage Delivery Service from Send My Bag French Birchbox Competitor JolieBox Acquires Spain’s Glamourum JolieBox, which is basically a French version of Birchbox, has just acquired the Spanish version of Birchbox, a service known as Glamourum. The acquisition comes a few months following the company’s Series A with Alven Capital, and the acquisition of its U.K. competitor Boudoir Privé. Terms of the deal were not disclosed, but it was for a mix of cash and stock, the company says. JolieBox was founded in 2011, and has ambitions to expand into international markets, as indicated by its previous acquisitions. With the Glamourum acquisition, the company now has ties with top brands in the Iberian market. And it already has established relationships with over 100 beauty brands, including Lancôme, Yves Saint Laurent, L’Oreal, Laura Mercier, Caudalie, Payot, L’Occitane, Bourjois, Kiehl’s, and others. Since its launch, the company has seen over 50% compound monthly growth, and today serves tens of thousands of clients. JolieBox is not the only European player to have copied the Birchbox model.