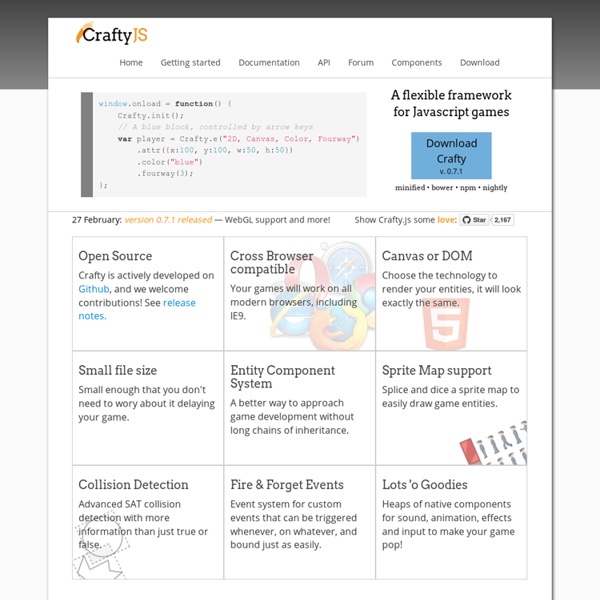 Show Crafty.js some love: Cross Browser compatible Your games will work on all modern browsers; even IE9! Canvas or DOM Choose the technology to render your entities, it will look exactly the same. Small file size

Follow Drone As I posted the other day, I have been spending some time playing around with dynamic drawing with the HTML5 Canvas element and EaselJS. I have put together quite a few examples and experiments and will be posting them (along with what I learned from them) over the next couple of weeks. The first example I want to share is a simple one which I call "follow". Random Dungeon Generator A Brief History I began working on my dungeon generator sometime around 1999. It was originally hosted on the demonweb (my personal home page), moved to the Dire Press website in May 2006, and then to the donjon website in Sept 2009. Early versions included basic dungeon layout and size options, and generated maps as HTML tables of black and white cells. Code to generate images for dungeon maps was added in March 2009, and cavernous dungeons in Sept 2010.

Backgrid.js - A powerful widget set for building data grids with Backbone.js If you have a large result set like the above, you'd probably want to be able to paginate and filter your results. This is easily achieved in Backgrid.js. Backgrid.js comes with a number of filters and a paginator extension which you can load into your own code. To use the paginator, you must first declare your collections to be a Backbone.PageableCollection, which is a simple subclass of the Backbone.js Collection with added pagination behavior. Getting Started with EaselJS One of the features of HTML5 that developers are most excited about is the Canvas element. The Canvas element essentials provides a bitmap canvas for dynamically rendering shapes and bitmap graphics. It is very similar to the Flash Player's Bitmap and BitmapData classes. However, working with the Canvas element can be difficult, especially if you need to manage, update and or / animate multiple shapes and bitmaps.

Monthly Experimental Games Crayon Physics Deluxe out now for iPad November 30th, 2012 Crayon Physics Deluxe is out now for iPad! cakejs - CAKE - Canvas Animation Kit Experiment UPDATE 2.7.12: A new cake (2.0) is on it's way! With new docs, Closure compatibility, performance tweaks and more, we hope for this to be the most solid release yet. Released under the MIT license. Tween Circles Demo Recent Updates Follow @ Create JS February 2013 Ajax editable data grid - DHTML grid control with flexibility and user API. Written in pure javascript, Sigma grid is an open source AJAX data grid for displaying and inline editing data in a scrollable and sortable table. It is very powerful yet easy to use & integrate with php, asp.net, jsp and RoR. sigma ajax grid master / details sample screenshot PixelFlow If you have happen to have been watching my Flickr feed for the past week or two, you have probably noticed that I have been playing around with creating some graphics using Canvas and EaselJS. What started as a simple EaselJS experiment, quickly morphed into an excuse to build a mini app / example and play around with some of the new HTML5 and CSS3 features. The example I created (named PixelFlow) is a simple example / app that allows you to choose an image, and then create some designs using the colors from the image. The core drawing functionality is built about the HTML5 canvas element and the EaselJS library.

Indie Resources On the 30th July 2014 the site got updated, restrutured and redesigned… however the update is still not finished and thus this new Indie Resources overview page is partly incomplete. In case you are missing something you can still check out the outdated old Indie Resources page until the update is complete. Thank you for your understanding. SKYLINE Game Engine Welcome to the Skyline Game Development System. Skyline Game Development System A Complete all in game Development Solution for any genre. Proudly powered by WordPress and BuddyPress. Gamification Categorization[edit] Gamification in a narrow sense is used in a non-game context, is built into the service system, and is aiming at an infinite experience. It does not aim at creating a game but offering a gameful experience.