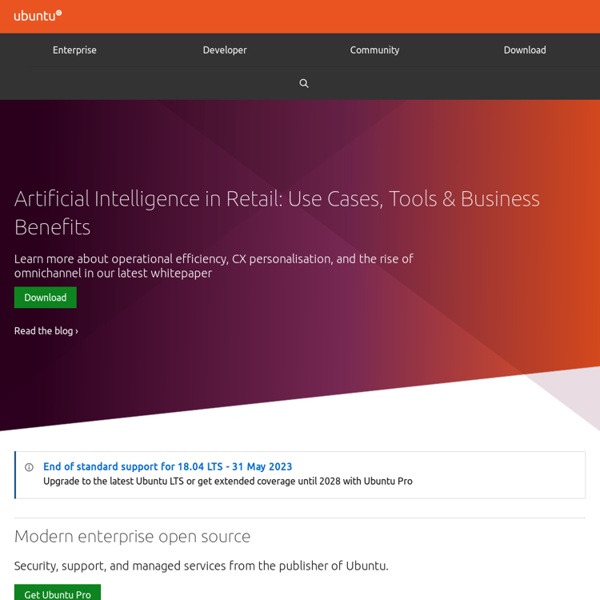 Windows vs Ubuntu – Usability « Roman Kennke's Blog A couple of days ago I received a new laptop, and it came with Windows (Vista). I thought I’d give it a try (haven’t touched Vista at all so far). This Windows thingy came preinstalled on this laptop, so I was thinking I could jump right into it.

Top 11 Cloud Platforms for Internet of Things (IoT) Here, we will look at the top, most-recommended cloud platforms used for IoT development. Let's get started! 1. OPEN SOURCE GOD: 480+ Open Source Applications Open source software is booming: here we round up over 480 open source applications for you to use or build upon. Feel free to add more apps in the comments. And don’t forget to subscribe to Mashable for the latest web news and resources. Also see the other entries in this series: ONLINE PRODUCTIVITY GOD, WORDPRESS GOD, ONLINE MEDIA GOD and FIREFOX GOD. Accounting Adaptive Planning Express - An open source solution enabling medium sized companies to automate budgeting and forecasting by moving beyond traditional applications like Excel.

eDonkey network The eDonkey Network (also known as the eDonkey2000 network or eD2k) is a decentralized, mostly server-based, peer-to-peer file sharing network best suited to share big files among users, and to provide long term availability of files. Like most sharing networks, it is decentralized, as there is not any central hub for the network; also, files are not stored on a central server but are exchanged directly between users based on the peer-to-peer principle. Currently, the eD2k network is not supported by any organization (in the past it was supported by the MetaMachine Corporation, its creator, which now is out of business) and development and maintenance is being fully provided by its community and client developers. There are many programs that act as the client part of the network.

25 Killer Websites that Make You Cleverer It’s easy to forget that we have access to a virtually limitless resource of information, i.e. the Internet. For a lot of us, this is even true at our fingertips, thanks to the ubiquity of smartphones and an ever-increasing push for online greatness by tech engineers all over the world. As a result, there are countless websites out there that are geared to make you smarter and more brilliant for either a low or no cost. Here are just 25 killer websites that may just make you more clever than ever before. 1. CableDialup This page describes how to use a cell phone and a USB cable to connect your pc to the internet. For this example I used: Ubuntu Breezy a Nokia 6021 cell phone a CA-42 cable an Italian Vodafone provider The instructions should be valid with minimal modifications also for a Bluetooth or infrared connection and for other providers. I used the packages wvdial and netenv, which can be installed by sudo apt-get install wvdial sudo apt-get install netenv

Sigfox IoT Network Spreads Across the Globe - Industrial IoT/Industrie 4.0 Viewpoints Sigfox is growing. Founded in France in 2009 by Ludovic Le Moan and Christophe Fourtet, the company behind the eponymous low power wide area network (LPWAN), now counts a staff of more than 200, numerous partnerships with operators and integrators, and offices across Europe, USA, and Asia. The latest (Series E) funding round in November 2016, which raised €150 million, will help accelerate Sigfox network deployment from the current 29 countries to 60 by next year. Investors in Sigfox include Air Liquide, Intel Capital, Salesforce Ventures, and Total. 5 Great Ways To Put Your Dusty Old iPod To New Use How long has your old iPod been in a drawer, unloved and dusty? Probably since the day you upgraded to a fancy new touch version or decided your smartphone would suffice from now on. But wait! Your old iPod is still a more than capable device that eats MP3s for breakfast and even takes advantage of a few old-school apps. If you’re short on uses for your old white chum these days, read on… First: Make It Awesome

Onswipe Imagine waiting for the train while picking out your groceries from a display case filled with products identical in size, scale and color to really grocery store shelves. If the first round of the digital revolution was about making the real virtual, this time it is about making the virtual real again. South Korean grocery chain Tesco was looking for a way to one-up their major competitor – impossible to do in terms of physical shops due to a lack of actual stores; hence, they turned toward the world wide web with a combination of mobile phone and QR code technologies.

Securing an Ubuntu Server « andrewault.net For more current information, see: Security is relative. Will these steps make your server “secure”? It will be more secure than it was before. And more secure than most servers. IIoT Re-Shaping Plant Information and DCS Architecture - Industrial IoT/Industrie 4.0 Viewpoints Through IIoT-enabled technologies and strategies, industrial users can collect and store data from almost anything at an extremely high frequency and incredibly low cost. This enables efficiencies in work and business processes that were not possible in the past. Distributed control systems (DCS) and programmable logic controllers (PLC) with process historians have been performing some elements of this for decades. While they still deal with sensors and computing, IIoT-enabled solutions can deliver very different outcomes than DCS- and PLC-based process automation architectures alone. Historically, process automation systems have been designed for a single purpose; to support process control based on the process design characteristics as spelled out on the process & instrumentation design (P&ID) diagrams.

If your on the computer, you can't see my phone symbols. I'm saying I heart Ubuntu. by floridabel Dec 22

There is a game program I would like to write that requires some though not allot of graphics, plus some though not much sound. I'm thinking of using Dark Basic to write the program. Does Linux have an application for game development that is similar to Dark Basic? I would have to learn Dark Basic on this win7 computer and might as well write the program on a Linux computer if there is something that I can get running and understand. I haven't written a program since about 1985. Though it takes me 3 to 4 weeks to learn any new computer language well enough to start writing code. So if there is some programming app. that Linux has that would work I would like to write the program for a Linux OS. Any suggestions? by timepeaces Oct 30

To davidedepau1996 I like Ubuntu. Had it installed on my desktop, Back when I had winxp. Well xp just didn't like the linux partition so it crashed it. I installed Linux in a VM on this laptop then ran out of room on this computer puny 300 gig harddrive. When I get a terrabyte drive I'll clean this one off and put both Ubuntu and win 7 in a Virtual environment. It will be a few weeks. Since you understand Ubuntu maybe you can answer a question. Cont. by timepeaces Oct 30

Hi puppy linux live is he fasest way to partition and format a drive to get ready for any system install. I'll probably intall a vmware usb boot linux soon in addition the windows system. I should run win7 off a usb drive also. Easy to fix probs that way. especially if your running in a vmware environment. L8trs by timepeaces Oct 30

I use Ubuntu mainly in the form of a 'Live Disc' to give me a clean enviroment to do online ordering and banking. However the sheer amount of great open source software now available - that I have used for a long time in Windows environment and exists in Linux - is going to make me ditch Windows very soon. by matthewbridges Oct 29

Yes If I had 2 computers or extra drives that I could dedicate to ubuntu I would try another dual boot system. My other computer runs one game that will only run under winxp. This one I use for research and it has the 300 gig drive full. Do I have too many interest? Yes probably. Oh well that is what keeps things interesting:) I hope one day soon to get back to building cities in Active worlds 3d universe. I do not believe they have ever made a version to run on Linux. L8trs by timepeaces Feb 27

I use VLC too. I think the issues come from my particular TV set (50" bit the dust). Also I use a very old PC for playback, so I'm not complaining much. It is improving, too, plus I try to avoid mlk which is probably too CPU-intensive. by alendar Feb 26

Does the Chinese version of Ubuntu not contain secret sensor filters? Just asking..... by michiel99 Feb 26

Using VLC player I havent come across a movie that did not play. To set screen resolutions I have used xrandr which has always helped me. Of course not all Win software runs on Linux. Some people complai e.g. about not having an equivalent of One-Note. On the other hand, there are many blessings to be counted as you apparently have discovered. Happy Computing! by michiel99 Feb 26

I switched from Windows 7 after it crashed (due to errors in booting and impatience), and I couldn't get a CD from MSFT, since it was a download installation. It was very hard to get used to 10.04 and I hated having to install MP3 and video code, and it couldn't handle my 50 in monitor perfectly. Some movies wouldn't play right. I missed Visual C++ with its powerful interface. I had switched to U++, though, but little things in Ubuntu in U++ IDE did not work right in debugging. Death of a thousand cuts, but I fought through it, and now am quite happy. I like watching it improve steadily. All pay-for code has a vested interest in forcing you into new paradigms of work-flow and tool use in order to get you to spend. Free software can leave a good thing alone. by alendar Feb 26

Completely agree. If only the general user community would be able to get past its fear of anything new. Often, when I tell people about Ubuntu, they jump to the conclusion that b/c it's not Windows, it's incompatible. by trustcircle Feb 9

you might also want to see what desktop enviorment you like better GNOME or KDE (most large Distros come with both) there are also a fre other Desktop enviorments such as LXDE and Xfce. by fatality Dec 6

@The_third_man - well at least your begining your venture into the alternitave relm of better OS's . Ubuntu is a great start and if you need any help or have any questions feel free to ask by fatality Dec 6

@fatality -- Wow. That's a lot of OS's. I'd like to look into them, but I've just begun my journey into the alternative -- still getting used to doing things a bit differently. by the_third_man Dec 1

Ubuntu is a great OS but persionaly i like Sabyon, Mint and BackTrack more as thez suit my needs better by fatality Nov 30