DOD successfully tests terrifying swarm of 104 micro-drones. The Department of Defense has released video of a test of swarming drones conducted in the skies over the US Navy's test range at Naval Air Weapons Station China Lake in California. 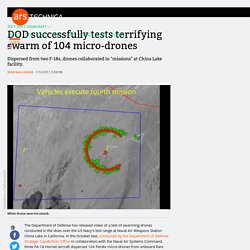 In the October test, conducted by the Department of Defense Strategic Capabilities Office in collaboration with the Naval Air Systems Command, three FA-18 Hornet aircraft dispersed 104 Perdix micro-drones from onboard flare dispensers. The drones then communicated with each other, swarmed, and performed a series of designated "missions"—including finally swarming in a circle around a designated point on the ground. Why the US Government Is Terrified of Hobbyist Drones. If you want to understand why the government freaked out when a $400 remote-controlled quadcopter landed on the White House grounds last week, you need to look four miles away, to a small briefing room in Arlington, Virginia. 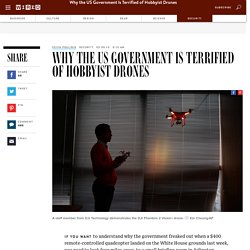 There, just 10 days earlier, officials from the US military, the Department of Homeland Security, and the FAA gathered for a DHS “summit” on a danger that had been consuming them privately for years: the potential use of hobbyist drones as weapons of terror or assassination. The conference was open to civilians, but explicitly closed to the press. One attendee described it as an eye-opener. The officials played videos of low-cost drones firing semi-automatic weapons, revealed that Syrian rebels are importing consumer-grade drones to launch attacks, and flashed photos from an exercise that pitted $5,000 worth of drones against a convoy of armored vehicles.

(The drones won.) A Drone Maker Takes Decisive Action The technique is not new to DJI. Go Back to Top. US Gov. Unleashes Weaponized Drone Swarm. US Gov. 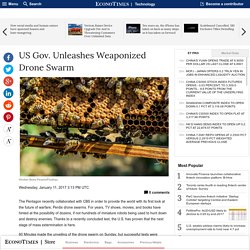 Unleashes Weaponized Drone Swarm Worker Bees.Pexels/Pixabay Wednesday, January 11, 2017 3:13 PM UTC The Pentagon recently collaborated with CBS in order to provide the world with its first look at the future of warfare; Perdix drone swarms. For years, TV shows, movies, and books have hinted at the possibility of dozens, if not hundreds of miniature robots being used to hunt down and destroy enemies. 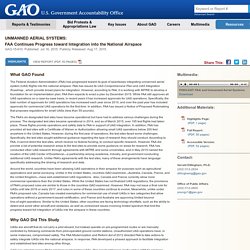 FAA has issued its UAS Comprehensive Plan and UAS Integration Roadmap , which provide broad plans for integration. However, according to FAA, it is working with MITRE to develop a foundation for an implementation plan; FAA then expects to enact a plan by December 2015. While FAA still approves all UAS operations on a case-by-case basis, in recent years it has increased approvals for UAS operations. Specifically, the total number of approvals for UAS operations has increased each year since 2010, and over the past year has included approvals for commercial UAS operations for the first time. The FAA's six designated test sites have become operational but have had to address various challenges during the process. Why GAO Did This Study GAO was asked to review FAA's progress in integrating UASs. Unmanned Aerial Systems: Further Actions Needed to Fully Address Air Force and Army Pilot Workforce Challenges.

What GAO Found In April 2014, GAO reported on several issues the Air Force faced in managing its UAS pilots, and while the Air Force has taken some actions since then, it has not fully implemented GAO's recommendations to strengthen its management. 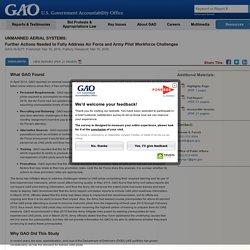 Personnel Requirements : GAO reported that the Air Force had not accurately identified the number of UAS pilots required to accomplish its mission nor had it established a minimum number of pilots needed. As of March 2016, the Air Force had not updated personnel requirements and until it does, the Air Force will not know if it is assuming unacceptable levels of risk to accomplishing the mission and ensuring pilot safety. Unmanned Aerial Systems: Status of Test Sites and International Developments. What GAO Found Since becoming operational in 2014, the Federal Aviation Administration's (FAA) unmanned aerial systems (UAS) test sites have conducted over 195 flights across five of the six test sites. 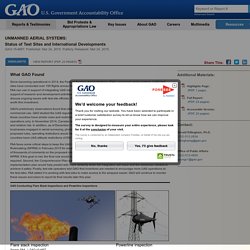 These flights provide operations and safety data that FAA can use in support of integrating UAS into the national airspace. FAA has not provided funding to the test sites in support of research and development activities but has provided staff time through, for example bi-weekly meetings to discuss ongoing issues with test site officials. FAA staff said that the sites are a benefit to the integration process and worth this investment. GAO's preliminary observations found that other countries have progressed toward UAS integration and allow commercial use. Surveillance Drones. Surveillance drones or unmanned aerial systems (UASs) raise significant issues for privacy and civil liberties. 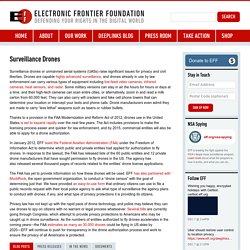 Drones are capable highly advanced surveillance, and drones already in use by law enforcement can carry various types of equipment including live-feed video cameras, infrared cameras, heat sensors, and radar. Some military versions can stay in air the hours for hours or days at a time, and their high-tech cameras can scan entire cities, or alternatively, zoom in and read a milk carton from 60,000 feet. They can also carry wifi crackers and fake cell phone towers that can determine your location or intercept your texts and phone calls. Drone manufacturers even admit they are made to carry “less lethal” weapons such as tasers or rubber bullets.

NORTH DAKOTA: WELCOME TO THE DRONE CAPITAL OF THE WORLD