Would you like a webcam in your bedrooms and bathrooms broadcasting live. Update 23/03/2012 : ‘Russian webcam hackers spy on UK homes & offices‘ ‘Website shows footage of babies sleeping in cots, offices and even a pub. 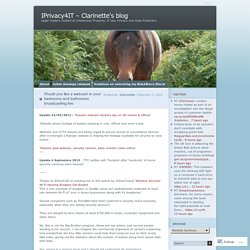 Webcam and CCTV owners are being urged to secure access to surveillance devices after it emerged a Russian website is making the footage available for anyone to view online.’ ‘Hackers post webcam, security camera, baby monitor video online’ —– Update 4 Septembre 2013 : ‘FTC settles with Trendnet after ‘hundreds’ of home security cameras were hacked’ Thanks to @TechLOG to pointing me to this article by InfoseI’sland ‘Wireless Security: Wi-Fi Hacking Burglars Get Busted This is one example of burglary in Seattle using non sophisticated materials to hack into network Wi-Fi of ‘over a dozen businesses along with 41 burglaries’.

Should companies such as TrendNet take their customer’s security more seriously, especially when they are selling security devices? IPrivacy4IT - Clarinette's blog. Update 20/03/2012. 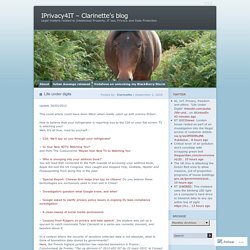 Car hacking. The greatest privacy threat of all: our connected devices. Researchers discover over 170 million exposed IoT devices in major US cities. Researchers have discovered more than 178 million Internet of Things (IoT) devices visible to attackers in the ten largest US cities. 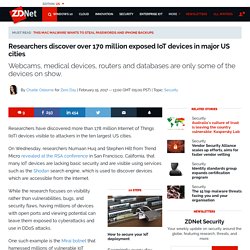 On Wednesday, researchers Numaan Huq and Stephen Hilt from Trend Micro revealed at the RSA conference in San Francisco, California, that many IoT devices are lacking basic security and are visible using services such as the Shodan search engine, which is used to discover devices which are accessible from the Internet. 10 steps. Wearable AI that can detect the tone of a conversation. It’s a fact of nature that a single conversation can be interpreted in very different ways. 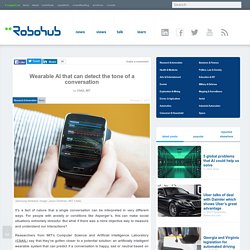 For people with anxiety or conditions like Asperger’s, this can make social situations extremely stressful. But what if there was a more objective way to measure and understand our interactions? Researchers from MIT’s Computer Science and Artificial Intelligence Laboratory (CSAIL) say that they’ve gotten closer to a potential solution: an artificially intelligent wearable system that can predict if a conversation is happy, sad or neutral based on a person’s speech patterns and vitals. “Imagine if, at the end of a conversation, you could rewind it and see the moments when the people around you felt the most anxious,” says graduate student Tuka Alhanai, who co-authored a related paper with PhD candidate Mohammad Ghassemi that they will present at next week’s Association for the Advancement of Artificial Intelligence (AAAI) conference in San Francisco. How it works Results. Artificial Intelligence. It's not just your TV that can track your habits without consent. Can Your 'Smart' Appliances Be Trusted with Your Personal Data? Probably Not...

Your fridge is getting so smart, security-software maker Kaspersky Lab thinks you probably shouldn’t trust it. 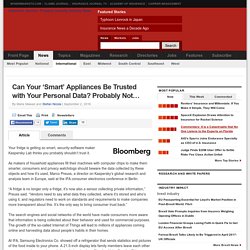 As makers of household appliances fill their machines with computer chips to make them smarter, consumers and privacy watchdogs should beware the data collected by these objects and how it’s used, Marco Preuss, a director on Kaspersky’s global research and analysis team in Europe, said at the IFA consumer electronics conference in Berlin. “A fridge is no longer only a fridge, it’s now also a sensor collecting private information,” Preuss said. “Vendors need to say what data they collected, where it’s stored and who’s using it, and regulators need to work on standards and requirements to make companies more transparent about this. Artificial intelligence: don't believe the hype. André Bergamin Thanks to neural networks - digital approximations of the way that the human brain learns - artificial intelligence has made enormous breakthroughs in everything from creating machines that can recognise faces with more accuracy than a human, to building cars capable of driving themselves, to recently, a computer "Turing test for sound" which can watch silent videos and predict the sounds that should accompany them. 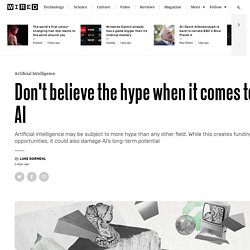 But it very nearly didn't happen like this. Forty years ago, research into neural networks almost stopped altogether. The Internet of Things' Dangerous Future: Bruce Schneier. Last year, on October 21, your digital video recorder — or at least a DVR like yours — knocked Twitter off the internet. 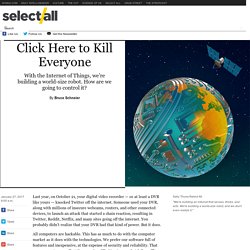 Someone used your DVR, along with millions of insecure webcams, routers, and other connected devices, to launch an attack that started a chain reaction, resulting in Twitter, Reddit, Netflix, and many sites going off the internet. Connected car in the second-hand lot? Don't buy it if you're not hack-savvy. Cars are smart enough to remember an owner, but not smart enough to forget one – and that's a problem if a smart car is sold second-hand. 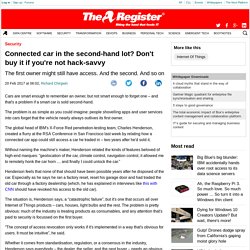 The problem is as simple as you could imagine: people shovelling apps and user services into cars forget that the vehicle nearly always outlives its first owner. The global head of IBM's X-Force Red penetration-testing team, Charles Henderson, created a flurry at the RSA Conference in San Francisco last week by relating how a connected car app could still access a car he traded in – two years after he'd sold it. Without naming the machine's maker, Henderson related the kinds of features beloved of high-end marques: “geolocation of the car, climate control, navigation control, it allowed me to remotely honk the car horn … and finally I could unlock the car.” Lawyers Ready to Pounce if Companies Forget IoT Privacy. 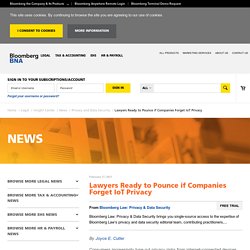 Cutler Consumers increasingly tune out privacy risks from internet-connected devices, and companies that don’t take up the privacy torch may be creating liability, attorneys told Bloomberg BNA. Companies offering connected devices, enabling software and applications and other services in the internet of things (IoT) world should take note that class action attorneys are paying attention to the rapidly evolving technology. If companies don’t proactively take on consumer privacy protection, class action attorneys and regulators stand ready to step into the void. The increased attention from the plaintiffs’ bar means that companies, especially those with a consumer-facing front such as Apple Inc. and Alphabet Inc.' Bloomberg Law®, an integrated legal research and business intelligence solution, combines trusted news and analysis with cutting-edge technology to provide legal professionals tools to be proactive advisors.

Class Action Landscape Digital Love-Hate Relationship. How you're tracked digitally all day (and what you can do about it) On the show Devin Coldewey TODAY Aug. 1, 2013 at 9:10 AM ET Our daily habits — when we wake up, how we get to work, what we like to watch when we get home — are being tracked by dozens of interconnected systems, from cell carriers to traffic cameras. 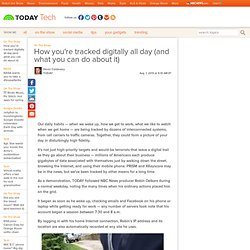 Un matériel accessible L’interception de ce signal nécessite un matériel simple et peu onéreux, puisqu’un une carte électronique Arduino équipée d’un récepteur radio coûte environ 35 dollars. AI Open Letter - FLI - Future of Life Institute. Artificial intelligence (AI) research has explored a variety of problems and approaches since its inception, but for the last 20 years or so has been focused on the problems surrounding the construction of intelligent agents – systems that perceive and act in some environment. In this context, “intelligence” is related to statistical and economic notions of rationality – colloquially, the ability to make good decisions, plans, or inferences. The adoption of probabilistic and decision-theoretic representations and statistical learning methods has led to a large degree of integration and cross-fertilization among AI, machine learning, statistics, control theory, neuroscience, and other fields.

Smashing Security: Using public Wi-Fi - a Smashing Security splinter. Why online privacy matters — and how to protect yours. As the principal technologist at the American Civil Liberties Union, Christopher Soghoian (TED talk: How to avoid surveillance … with the phone in your pocket) spends much of his time thinking about privacy and surveillance and how individuals can protect themselves from spying. Recently, he recorded a Facebook Live conversation with his fellow TED Fellow, Will Potter (TED Talk: The secret US prisons you’ve never heard of before), a reporter and author who specializes in covering dissident politics and culture and whose first question to Christopher was: If I don’t have anything to hide, why should I be concerned about privacy or security, anyway?

With that, they were off. Christopher Soghoian: I hear this all the time from people, and you know, I think many of us do have something to hide. We may not all be worried about the government, but there are things we may not want our employers or members of our families to know.