The Pirate Org sur Twitter : "Amsterdam will host the first ever #drone circus later this year. The man who plans to be ringmaster - of a drone circus. There’s a busy annual programme of events at the Amsterdam Arena, including international football fixtures and music festivals. 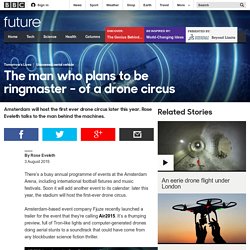 Soon it will add another event to its calendar: later this year, the stadium will host the first-ever drone circus. Amsterdam-based event company Fjuze recently launched a trailer for the event that they’re calling Air2015. It’s a thumping preview, full of Tron-like lights and computer-generated drones doing aerial stunts to a soundtrack that could have come from any blockbuster science fiction thriller. “We won’t sell one ticket on this trailer,” says Klaas Rohde, laughing. Car Crash TV on Twitter: "I've watched way to much science fiction to know this isn't going to end well for mankind. McCaskill: Drone pilot stress is unprecedented. WASHINGTON — A Missouri senator is pressing her concerns over combat stress among drone pilots, yet another sign of the troubles plaguing the Air Force’s burgeoning warfare program. 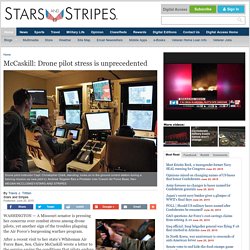 After a recent visit to her state’s Whiteman Air Force Base, Sen. Claire McCaskill wrote a letter to the service saying the conditions that pilots endure is unprecedented and the psychological effects might not yet be known. She published the letter to Chief of Staff Gen. Congo's Resource Curse \u0026 US Backed Atrocities by Media Roots. Iran Unveils "Suicide Drones" Amid Nuclear Deal Talks. India to Use Weaponized Drones For Crowd Control. Obama administration to allow sales of armed drones to allies. The Obama administration will permit the widespread export of armed drones for the first time, a step toward providing allied nations with weapons that have become a cornerstone of U.S. counterterrorism strategy but whose remotely controlled power to kill is intensely controversial. 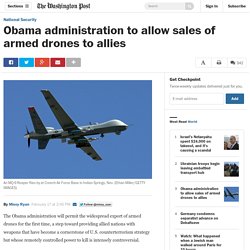 The new policy, announced Tuesday after a long internal review, is a significant step for U.S. arms policy as allied nations from Italy to Turkey to the Persian Gulf region clamor for the aircraft. It also is a nod to U.S. defense firms scrambling to secure a greater share of a growing global drone market. Drones to search Amazonian forests for ancient civilizations. Data on ancient settlements in the Amazon, which have been accumulating over the last few years, show that civilization there was far more advanced than previously thought. 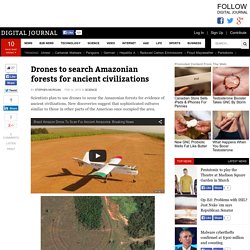 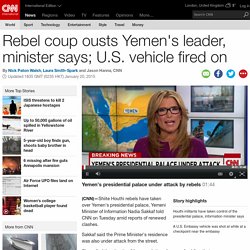 She called the situation "the completion of a coup," adding that "the President has no control. " President Abdu Rabu Mansour Hadi was thought to be in his private residence at the time -- not in the palace. There were reports of clashes near the residence. The developments in the capital, Sanaa, came a day after heavy fighting between government forces and Houthis -- Shiite Muslims who have long felt marginalized in the majority Sunni Muslim country.

Nine people were killed and 67 others were injured in the fighting Monday, Yemen's Health Ministry said, before the sides agreed to a ceasefire. Gunfire could be heard sporadically across the city Tuesday, whereas a day earlier it was constant. Unknown assailants fired shots Monday night at a U.S. Secret Docs Reveal Dubious Details of Targeted Killings in Afghanistan. Death is circling above Helmand Province on the morning of Feb. 7, 2011, in the form of a British Apache combat helicopter named "Ugly 50. 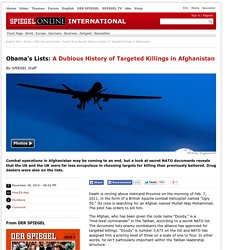 " Its crew is searching for an Afghan named Mullah Niaz Mohammed. The pilot has orders to kill him. Bombs Away: Weaponized Drones Flying High. For a while it seemed that the drones project had been restrained following a flood of public criticism last year. 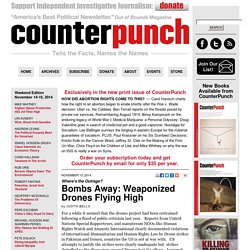 Reports from United Nations Special Rapporteurs, and mainstream NGOs like Human Rights Watch and Amnesty International clearly documented violations of International Humanitarian and Human Rights Law by Drone strikes in Pakistan and Yemen, countries the US is not at war with. US attempts to justify the strikes were clearly inadequate but strikes dwindled so the discussion around Drones lost it’s allure. I warned last fall that this is was just a superficial misdirection while all the corporate and pentagon initiatives remained on track [1][2]. Today the drones are back in force and legality seems a forgotten issue. ISIS is on the front burner with Iraq and Syria facing airstrikes with no mandate from Congress and none from the United Nations. Metadata reports of Drone attacks occur daily some weeks, but at least weekly, since some time in September. Drones over Afghanistan. France investigates mystery drones over nuclear plants. Unidentified drones seen over several of France's nuclear reactors in recent weeks prompted the French government to launch an investigation on Thursday. 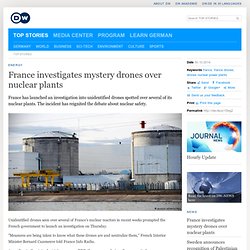 "Measures are being taken to know what these drones are and neutralize them," French Interior Minister Bernard Cazeneuve told France Info Radio. According to the state electricity company EDF, the unmanned aircraft were spotted over seven nuclear plants across the country between October 5th and October 20th, without any impact on the plants' safety or functioning. It is not known who was behind the mysterious flights. Aircraft are not permitted to fly within a 5-kilometer (3-mile) radius and an altitude of 1,000 meters (3,280 feet) over nuclear plants. In France, suspicion immediately fell on the anti-nuclear lobby. France's nuclear dependency.

Only 4% of drone victims in Pakistan named as al Qaeda members. When asked for a comment on the Bureau’s investigation, US National Security Council spokeswoman Caitlin Hayden said that strikes were only carried out when there was “near-certainty” that no civilians would be killed. 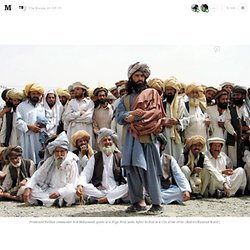 Hayden said: “The death of innocent civilians is something that the U.S. Government seeks to avoid if at all possible. New Weapons Spell Death For Drones; The Countermeasure Dance. AUSA: For years, Predator drones have been able to fly unopposed through most of their missions. 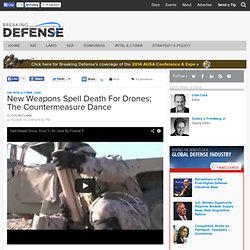 If we can do that, you can be sure other countries are working hard to deploy drones to do to us as we have done to them. Taking the classic dance of measure and countermeasure, strike and counterstrike, the Army and other services have been quietly working on weapons to shoot drones down or disable them. Rise of the Reapers: A brief history of drones.

Part One – the early years Winston Churchill watches launch of a De Havilland Queen Bee drone 1941. Copyright Imperial War Museum Although some trace the ancestry of today’s drones back to the V-1 rockets (‘doodle bugs’) of the Second World War, or even to the use of hot air balloons laden with explosives in the middle of the 19th Century, the real origins of today’s drones lie in the development of the first recoverable and reusable radio-controlled aircraft in the 1930s. The Royal Navy, looking for aircraft to shoot at for gunnery practice, developed out of the De Havilland Tiger Moth a remote-controlled aircraft dubbed ‘the Queen Bee’. “It’s very odd” – a former UK drone operator speaks. “You’re absolutely there, you’re in the fight,” recalls former UK drone operator Paul Rolfe in this week’s Drone News podcast.

“You’re hearing the guys on the ground and you’re hearing their stress, so when you finish your shift it’s very odd to then step outside… it’s the middle of the day and you’re in Las Vegas.” For several years Rolfe helped fly Reaper and Predator drones over Afghanistan from both a launch and recovery base in Kandahar and the mission control complex in Creech, Nevada, where RAF Unmanned Aerial Vehicles (UAV) operators are embedded.

This video allegedly shows a Hezbollah killer drone incinerate Al Qaeda militants in Lebanon. Feels like defeat: US air force bombs US-made army kit to foil Islamic State. The grainy black-and-white footage shows a military vehicle, a small dark mass in the crosshairs of a United States war plane, seconds before it explodes in a flash of light. That August 16 strike in northern Iraq, shown in video released by the US military, killed an unknown number of Islamic State fighters - and destroyed one US-made armoured vehicle that had cost up to US$300,000. Since the Obama administration began strikes there on August 8, US fighter jets and drones have destroyed Iraqi military vehicles provided by the US - worth an estimated US$3 million to US$4 million but which were later seized by Islamists who now control a third of Iraq.

The growing tally of US-made, US-destroyed weaponry shows how far Iraq has veered off the course the Obama administration had expected when American forces withdrew in 2011. US officials had hoped their efforts to train and arm the Iraq military, at a cost more of than US$20 billion, would guarantee stability. Nonviolent Drone Resister Sentenced To One Year in Prison. On July 10, grandmother of three, Mary Anne Grady Flores was sentenced to one year in prison after being found guilty of violating an Order of Protection. A packed courtroom of over 100 supporters was stunned as she was led away, and vowed to continue the resistance. These Orders of Protection, typically used in domestic violence situations or to protect a victim or witness to a crime, have been issued to people participating in nonviolent resistance actions at Hancock Air Base since late 2012. The base, near Syracuse NY, pilots unmanned Reaper drones over Afghanistan, and trains drone pilots, sensor operators and maintenance technicians.

World catching up with US in $28.7 bln drone race. Published time: April 29, 2014 15:57 An X-47B pilot-less drone (Reuters / Rich-Joseph Facun) Analysts predict that in less than a decade’s time, the United States will spend less than half the global total on drone research and development. Asia in particular is expected to surge ahead, with South Korea set to produce “suicide drones.” The US draw down in Afghanistan after over a decade of war, coupled with Chinese desire for expensive unmanned aerial vehicles (UAVs), are primary factors behind the expected reversal in US drone dominance, Forecast International, Inc., which provides defense and aerospace market intelligence and analysis, reported earlier this month.

VVD wil politiedrones boven Den Haag. Elsaidst : Our #BDS flash mob against... EU spending over $400m on secret drone project – Civil rights group. CIA’s Drones, Barely Secret, Receive Rare Public Nod - Washington Wire. Anti-drone activist kidnapped in Pakistan before he was due to testify in Europe. Congress Blocks Plan to Transfer Drone Control From CIA to Pentagon. Photo: General Atomics An effort by President Obama to transfer America’s lethal, highly classified drone program from the CIA to the Pentagon appears to have been thwarted by lawmakers wielding a secret weapon of their own.