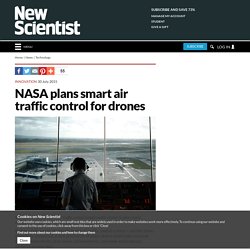 A new generation of smart drones could enjoy constant internet connectivity, plan routes collaboratively, and sense and avoid any obstacles in their way. NASA is planning an unmanned aerial systems traffic management (UTM) system that will not require humans to monitor each and every aircraft, as occurs today. Next-generation drones could be fitted with technology that allows them to hook into the cloud-based UTM system, which would provide constant communication, navigation and surveillance, directing drones and warning them of congestion or severe weather ahead. Advertisement Dave Vos, the head of Google’s Project Wing division, said the technology company was working on ultra-low cost Automatic Dependent Surveillance-Broadcast (ADS-B) transceivers.

Drone Makers Seek Traffic Control. The commercial use of drones remains mostly illegal in the U.S. 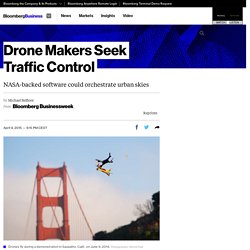 All the same, businesses are moving ahead with ways to profit from the small helicopters, with some assistance from the Federal Aviation Administration. In February the FAA, which is preparing drone rules, agreed to exempt State Farm from the prohibition, letting the insurer test the use of drones in claim inspections. On March 19 the agency granted Amazon.com a waiver to continue testing its package-delivery drones. And in Portland, Ore., startup SkyWard is pushing forward with a drone traffic control system that will allow thousands of the machines to fly through cities without colliding with one another or endangering people.

SkyWard is working with NASA and the world’s three largest drone makers—DJI in China, 3D Robotics in the U.S., and Parrot in France—to demonstrate that swarms of drones can safely coexist in crowded airspace. At this point, not very many places, and not very far. 7 Ways to Use Drones in the Classroom. I flew our shiny new drone up through the umbrellas on the quad, up past the roof of the gym, and into the low scattered clouds. 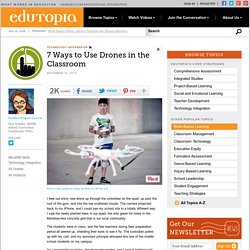 The camera projected back to my iPhone, and I could see my school site in a totally different way. Drone Design Program Flies Students Toward STEM Careers. (TNS) — The Newport News, Va., Public Library System just finished its UAVs 4 Me program that enables students 13 to 18 to build unmanned aerial vehicles from small robotics kits. 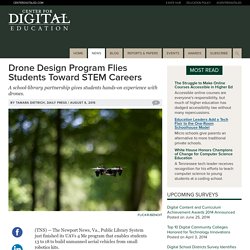 The program is designed as a hands-on way to engage teenagers in critical thinking, problem-solving and decision-making as well as steer them toward science careers. "Students learn and apply skills in math, electronics, aeronautics, physics and programming," teacher Chinell Little explained in a release. Little is a career and technical education lead teacher at Heritage High School, where the series wrapped up last week as part of the Governor's STEM Academy. In the five-part program, students built quadcopter drones, learned to fly them and put them through a competitive obstacle course. The winner of that competition was Aaronique Lee, who won a Samsung Galaxy tablet.

UAVs 4 Me is one of several programs in Hampton Roads to entice young people into STEM careers. Drones And STEM Education - Anne Lopez, Teacher/Educator [DRS 027] - Drone Radio Show. Can drones provide the framework for an effective STEM Education Program? 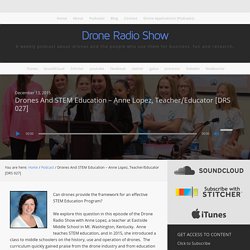 We explore this question in this episode of the Drone Radio Show with Anne Lopez, a teacher at Eastside Middle School in Mt. Washington, Kentucky. Anne teaches STEM education, and in 2015, she introduced a class to middle schoolers on the history, use and operation of drones. The curriculum quickly gained praise from the drone industry and from education professionals for its innovative approach and hands-on learning. Anne talks about the curriculum, the lessons learned and the place that drones play in STEM education. Show Outline [01:23] Meet Anne Lopez, STEM Education Teacher at Eastside Middle School in Mt. Students work as teams to build a drone. Drone assembly requires cooperation and coordination between team members. The Next Era of Aviation: Drone Traffic Management Convention. NASA researchers in California are using a modern version of a 150-year-old German photography technique to capture images of shock waves created by supersonic airplanes. 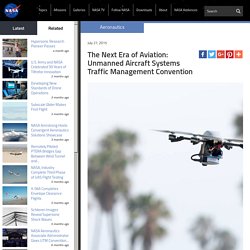 Over the past five years scientists from NASA’s Armstrong Flight Research Center at Edwards Air Force Base and Ames Research Center at Moffett Field have teamed up to demonstrate how schlieren imagery, invented in 1864 by German physicist August Toepler, can be used to visualize supersonic flow phenomena with full-scale aircraft in flight. The results will help engineers to design a quiet supersonic transport. Although current regulations prohibit unrestricted overland supersonic flight in the United States, a clear understanding of the location and relative strength of shock waves is essential for designing future high-speed commercial aircraft.

This schlieren image dramatically displays the shock wave of a supersonic jet flying over the Mojave Desert. Credits: NASA Photo Credits: U.S. Agriculture Drones - DRONELIFE. 7 Ways to Use Drones in the Classroom.