Today, 2-18-2019, I found nearly every video from YT which showed the ugly truth on fast food deleted. Obviously there is an effort to hide what is being done to us and although this book marking site claims they won't delete them... they are.

(1) Restaurant Employees Admit Which Foods They'll Never Order. Fast food chicken: Testing Subway, McDonald's, A&W, Wendy's & Tim Hortons (CBC Marketplace) The Dark Side of Fast Food: Why Does It Make You Sick / Fat / Tired / Taste So Good (2001) Scientists Find Out What Chicken Nuggets are REALLY Made Of. Top 20 Dangerous Foods You Absolutely Must Avoid. Photo credit: bigstock Everyone knows the foods that are healthy and those that are not, right? 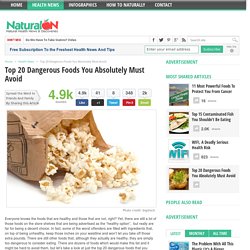 Yet, there are still a lot of those foods on the store shelves that are being advertised as the “healthy option”, but really are far for being a decent choice. In fact, some of the worst offenders are filled with ingredients that, on top of being unhealthy, keep those inches on your waistline and won’t let you take off those extra pounds. There are still other foods that, although they actually are healthy, they are simply too dangerous to consider eating. There are dozens of foods which would make this list and it might be hard to avoid them, but let’s take a look at just the top 20 dangerous foods that you should never eat and remove from your diet if you care at all about your health.

Those little bags of popcorn are just so convenient and easy to use. First, let’s start with the bag itself, which is lined with a chemical called PFOA, or perfluorooctanoic acid. Continue to Page 2. Why You Shouldn't Eat Food You See on TV Video. Subway restaurants exposed for using toxic ingredients. (NaturalHealth365) As one of the largest fast food chains, Subway Restaurants is working effortlessly to make an impact with the lives of people around the world as they campaign to “eat fresh.” 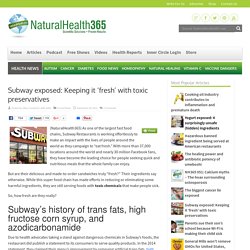 With more than 37,000 locations around the world and nearly 30 million Facebook fans, they have become the leading choice for people seeking quick and nutritious meals that the whole family can enjoy. But are their delicious and made-to-order sandwiches truly “fresh?” Their ingredients say otherwise. While this super food chain has made efforts in reducing or eliminating some harmful ingredients, they are still serving foods with toxic chemicals that make people sick.

Chick-fil-A proudly offers chicken with MSG and toxic chemicals. (NaturalHealth365) If you’ve ever seen Chick-fil-A’s advertisements or billboards, you’ll find a clever and cute message enticing you to eat more chicken all the while insinuating that beef is bad for you. 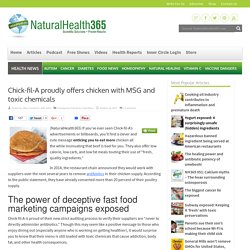 They also offer low calorie, low carb, and low fat meals touting their use of “fresh, quality ingredients.” In 2014, the restaurant chain announced they would work with suppliers over the next several years to remove antibiotics in their chicken supply. According to the public statement, they have already converted more than 20 percent of their poultry supply. How It's Made - Hot Dogs. What Are Chicken Nuggets Made Of? McDonald’s Uses Worm Meat Fillers But Can Legally Call It 100% Beef - NY Meta. 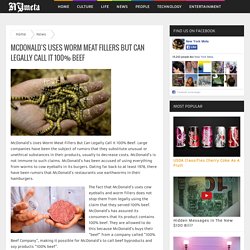 Large companies have been the subject of rumors that they substitute unusual or unethical substances in their products, usually to decrease costs. McDonald’s is not immune to such claims. Top 10 toxic ingredients used by McDonald's. 5 Darkest McDonald's Secrets. More Chicken McNugget 'strange fiber' photos released by Natural News Forensic Food Labs. (NaturalNews) More microscopic photos of the "mysterious fibers" found in McDonald's Chicken McNuggets have been released by the Natural News Forensic Food Lab. 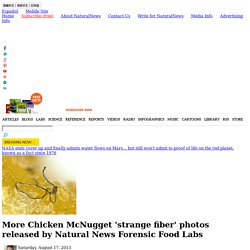 The forensic microscopy investigation was conducted by Mike Adams, the Health Ranger, using clean laboratory protocols. These new photos, shown below, appear to depict microscopic hairs, fibers or strands of varying colors and shades throughout the McDonald's Chicken McNugget samples. All the following photos were taken at 200X magnification. The hair-like fibers you see here are much smaller than a human hair or animal hair (see comparison below). The Chicken McNuggets were purchased on August 15, 2013 at a McDonald's restaurant in Austin, Texas.

Natural News broke the story yesterday about mysterious fibers found in Chicken McNuggets, and the story has been covered by www.DrudgeReport.com www.InfoWars.com and thousands of other websites across the 'net. 10 other companies that use the same Subway yoga mat chemical in their buns. Coca-Cola to Finally Drop Flame-Retardant From Powerade. Heather CallaghanActivist Post Brominated vegetable oil, aka BVO, a common citrus drink ingredient in the United States, is banned in Japan, India and the European Union. 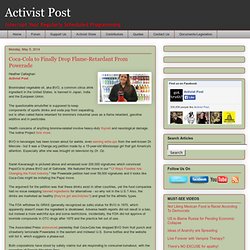 The questionable emulsifier is supposed to keep components of sports drinks and soda pop from separating, but is often called flame retardant for bromine's industrial uses as a flame retardant, gasoline additive and in pesticides. Health concerns of anything bromine-related involve heavy-duty thyroid and neurological damage. The Iodine Project lists more. BVO in beverages has been known about for awhile, even earning write-ups from the well-known Dr. Sarah Kavanaugh is pictured above and amassed over 200,000 signatures which convinced PepsiCo to phase BVO out of Gatorade. Watch This Video And You'll Never Eat McDonald's French Fries Again. Michael Pollan is an author, food activist, journalist and professor of journalism at the UC Berkeley Graduate School of Journalism. 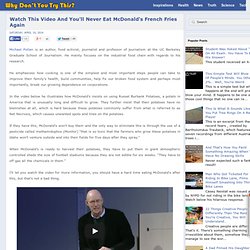 He mainly focuses on the industrial food chain with regards to his research. He emphasizes how cooking is one of the simplest and most important steps people can take to improve their family's health, build communities, help fix our broken food system and perhaps most importantly, break our growing dependence on corporations. In the video below he illustrates how McDonald's insists on using Russet Burbank Potatoes, a potato in America that is unusually long and difficult to grow. Why is Big Food Promoting Death on Their Packages? By Truthstream Media It was bad enough when it was just nutritionally void, genetically modified, and filled with dangerous additives and other excitotoxic and potentially carcinogenic chemicals... but now we're literally going to shape our food like little Satan heads and label it "demons" too? 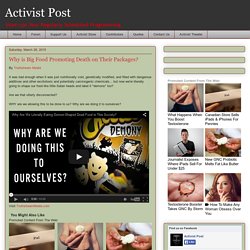 Are we that utterly disconnected? McDonald’s Japan Probes Tooth in Fries, Cargill Nuggets - Bloomberg Business. (Bloomberg) -- McDonald’s Corp.’s Japan business said today a human tooth was found in fries, and plastics in chicken nuggets and sundae, in a series of food-safety issues that happened in the past six months. 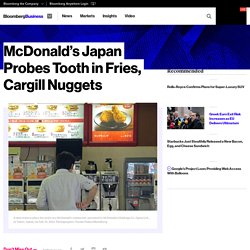 The affected nuggets, supplied by Cargill Inc.’s Thai unit, were sold at two outlets in Japan, including one in Tokyo, according to spokesman Takashi Hasegawa. Domino’s, McDonald’s, & Wendy’s Are All Feeding You A Chemical Used In Silly Putty. Source: www.collective-evolution.com | Original Post Date: January 26, 2014 – Polydimethylsiloxane, sounds tasty doesn’t it? 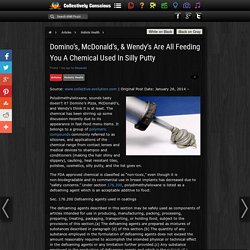 Domino’s Pizza, McDonald’s, and Wendy’s think it is at least. The chemical has been stirring up some discussion recently due to its appearance in fast-food menu items. Deception: Major tortilla chip brand using 'No GMO' label on contaminated product. The 4 Worst Fast Food ‘Ingredients’ They Don’t Tell You About.

By Anthony GucciardiNatural Society From breast implant chemicals to laxatives Remember back when Burger King was found to be secretly selling horse meat? It sounded concerning at the time, but the reality is that horse meat may be the least of your worries when it comes to dining out on fast food. In fact, some of the ‘meat’ you believe to be eating in the first place may actually be derived from a host of synthetic junk. And that’s just for starters. Here are 4 of the absolute worst fast food ‘ingredients’ that you have likely never been told about: 1.

Junk Food Encoded in Children's DNA and Beyond. New study ponders impact of Western food and GMOs on posterity's genes... Heather CallaghanActivist Post Through the emerging information from epigenetics - the study of environmental exposure on genes - it becomes apparent that we are not the body equivalent to Las Vegas.

How to Eliminate Junk Food Cravings for Good. By Dr. Mercola Americans' reliance on processed foods and snacks is undoubtedly one of the primary factors driving our skyrocketing obesity and disease rates. Even many people who "know better" have trouble keeping their hands out of the Doritos. Phosphate alert: Why fast food causes heart disease. Mon. May 12, 2014 by Karen Sanders, staff writer (NaturalHealth365) In just-published research, phosphate food additives have been linked with higher blood pressure and heart disease. Phosphates, also called phosphorous additives, are customarily added to processed meats, processed cheeses and various types of soda to increase shelf life and intensify flavors.

They also appear at high levels in fast food. Fast Food Hamburgers Could be as Little as 2% ACTUAL Meat. Here at NaturalSociety we've covered countless reasons to avoid fast food at all costs. This cheaply-processed food fuels illness and disease due to containing numerous harmful ingredients – some of which are actually banned in other countries. But if you need yet another reason to avoid the junk, here it is: According to a study published in the journal Annals of Diagnostic Pathology, some fast food hamburgers may contain as little as 2% actual meat. For the study, researchers analyzed the content of 8 fast food hamburger brands. To ensure that there was no bias in the results, they assigned each hamburger with an anonymously designated name, ranging from H1 to H8.

While it would only logical to assume that hamburgers are made up primarily of meat, much of the 5 billion hamburgers consumed by Americans annually actual contain very little meat (and could contain a whole host of other ingredients. (2) Facebook. Busted! KFC, Chick-fil-A, Burger King and Other Fast Food Restaurants Caught Using Huge Quantities of MSG While Calling Their Menu Items Fresh. Facebook. A short-term diet of junk food can irreversibly damage memory, study finds. (NaturalNews) According to a new study by researchers at the University of New South Wales in Australia, eating food that is loaded with sugar and fat for just one week can have a detrimental effect on the brain's cognitive ability. More worrying still, preliminary data suggests that this effect is permanent, indicating that junk food is even more toxic than we can possibly imagine.For the study, the Australian researchers - who were interested in clarifying the relationship between high-energy diets and impaired cognition - fed rats a "cafeteria diet" over a one-month period.

This diet was comprised of rat food supplemented with cakes, biscuits, lard and a 10 percent sucrose solution. A control group, subsisting on rat food without supplementation, was also monitored throughout the same period. The researchers found that the rats on the junk food diet experienced noticeable cognitive impairment within a very short time frame.