Fast food facts from the Super Size Me Web site. Study reveals parents' poor eating habits are to blame for childhood obesity, NOT fast food. A study conducted at the University of North Carolina at Chapel Hill found that poor eating habits linked to obesity are learned in children's homesFast food does contribute to obesity as does diets low in vegetable and high in preservatives served at home and at schoolsSome parents don't take the time to cook healthy meals for their children, and this leads to poor dietary decisions later in life By Alexandra Klausner Published: 01:13 GMT, 16 January 2014 | Updated: 13:37 GMT, 16 January 2014 Fast food is not to blame for childhood obesity, poor eating habits learned in children's home are, says a new study conducted by the University of North Carolina at Chapel Hill. 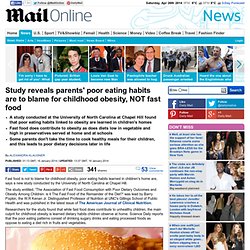 The study entitled, 'The Association of Fast Food Consumption with Poor Dietary Outcomes and Obesity Among Children: is it The Fast Food of the Remainder of the Diet? ' was lead by Barry Popkin, the W.R Kenan Jr. Not only are these bad habits observed at home, they are enforced in schools that lack healthy food options. Fast Food Linked To Child Obesity. Every day, nearly one-third of U.S. children aged 4 to 19 eat fast food, which likely packs on about six extra pounds per child per year and increases the risk of obesity, a study of 6,212 youngsters found. 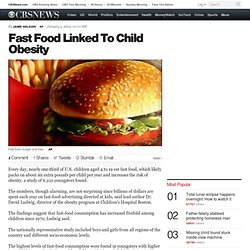 The numbers, though alarming, are not surprising since billions of dollars are spent each year on fast-food advertising directed at kids, said lead author Dr. David Ludwig, director of the obesity program at Children's Hospital Boston. The findings suggest that fast-food consumption has increased fivefold among children since 1970, Ludwig said.

Obesity and Fast Food. By Dr Ananya Mandal, MD There has been an exponential rise in the number of obese individuals especially in developed nations like United States and United Kingdom. 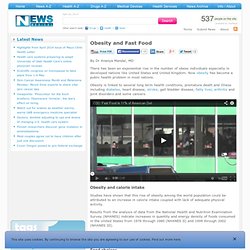 Now obesity has become a public health problem in most nations. Obesity is linked to several long term health conditions, premature death and illness including diabetes, heart disease, stroke, gall bladder disease, fatty liver, arthritis and joint disorders and some cancers. Obesity and calorie intake Studies have shown that this rise of obesity among the world population could be attributed to an increase in calorie intake coupled with lack of adequate physical activity. Results from the analysis of data from the National Health and Nutrition Examination Survey (NHANES) indicate increases in quantity and energy density of foods consumed in the United States from 1976 through 1980 (NHANES II) and 1999 through 2002 (NHANES III). America's Top 10 Healthiest Fast Food Restaurants - Food Recipes.

Dan Winters Who hasnt unwrapped a sandwich while driving down the highway or pulled a hard U-turn into a fast-food joint on the way home from a late meeting or soccer game? 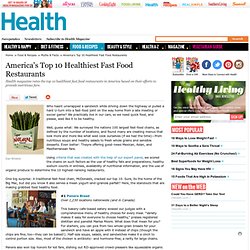 We practically live in our cars, so we need quick food, and please, wed like it to be healthy. Well, guess what: We surveyed the nations 100 largest fast-food chains, as defined by the number of locations, and found many are creating menus that look more and more like what wed cook ourselves (if we had the time)—from nutritious soups and healthy salads to fresh whole grains and sensible desserts. Even better: Theyre offering good-news Mexican, Asian, and Mediterranean fare.

Using criteria that was created with the help of our expert panel, we scored the chains on such factors as the use of healthy fats and preparations, healthy sodium counts in entrees, availability of nutritional information, and the use of organic produce to determine the 10 highest-ranking restaurants. View this article as a gallery. 10 Shocking fast food facts. We all know fast food isn't the healthiest of options — but these facts may surprise you and deter you even further from those convenient chain restaurants. 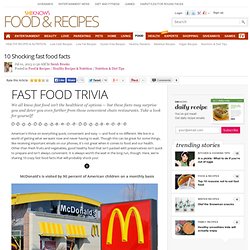 Take a look for yourself! American's thrive on everything quick, convenient and easy — and food is no different. We live in a world of getting what we want now and never having to wait. Though this can be great for some things, like receiving important emails on our phones, it's not great when it comes to food and our health. Other than fresh fruits and vegetables, good healthy food that isn't packed with preservatives isn't quick to prepare and isn't always convenient. McDonald's is visited by 90 percent of American children on a monthly basis You read that right. Source: Examiner.com.