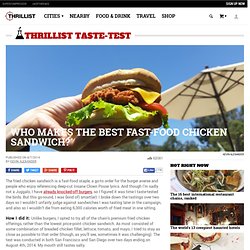 I know this because, when I went through the drive-thru and asked for it, the guy paused, asked me if I really just said Doublicious, then paused again to talk to someone, and told me it would be a five-minute wait. “Do you still want it? " he asked, feeling quite confident I’d opt for something they’d actually sold before. But I had a job to do, so I said, “I do,” and finally just went inside so I wouldn’t hold up the drive-thru line, because I am a gentleman. Who makes the best fast-food chicken nuggets? - Chick-fil-A Nuggets Top Our List.

Although I’ve long considered chicken nuggets a side dish to order while you figure out what you really want to get, there is no doubt that they are an essential part of the fast-food experience. 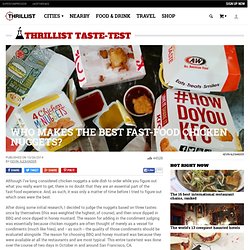 And, as such, it was only a matter of time before I tried to figure out which ones were the best. After doing some initial research, I decided to judge the nuggets based on three tastes: once by themselves (this was weighted the highest, of course), and then once dipped in BBQ and once dipped in honey mustard. The reason for adding in the condiment judging was essentially because chicken nuggets are often thought of merely as a vessel for condiments (much like fries), and -- as such -- the quality of those condiments should be evaluated alongside. The reason for choosing BBQ and honey mustard was because they were available at all the restaurants and are most typical. This entire taste-test was done over the course of two days in October in and around San Francisco, CA.

If this is what 2014 has bestowed on us so far, we feel pretty good about the rest of the burger calendar year. Goldbely 9. Mail-order Ramen Burgers The NY sensation was mercifully expanded to the masses for a limited run courtesy of Goldbely back in May. The Vulgar Chef 8. Not a fan of brioche? Confections of a Foodie Bride 7. Fat Kid Fridays, August 1st - Dentist Disaster, Belly Buster, and more.

August is upon us, a month symbolizing extreme grandeur and dignity... the kind of dignity that one can only achieve by inhaling a gigantic hot dog wrapped in 20in of pizza. 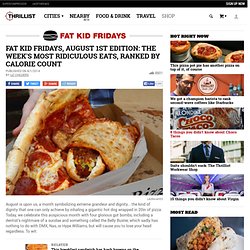 Today, we celebrate this auspicious month with four glorious gut bombs, including a dentist's nightmare of a sundae and something called the Belly Buster, which sadly has nothing to do with DMX, Nas, or Hype Williams, but will cause you to lose your head regardless. To wit: YouTube 4. Half Smoke & Pizza Ben's Chili Bowl (address and info) & Jumbo Slice (address and info)Washington DC Approximate calorie count: 1,412 With famed foods like Jumbo Slices that are bigger than your entire arm (unless you're Dikembe Mutombo), DC proves it takes hella drunchies to run our nation's capital. Laura Hayes 3. Best fast food items - Whataburger, In-N-Out Burger, and more. QSR Fast-Food Brand Rankings - McDonald's, Starbucks, Subway, and More.

Del Taco - Things You Didn't Know - Secret Menu. If you grew up in SoCal, you already know a LOT about Del Taco, like the fact that it sells tacos. 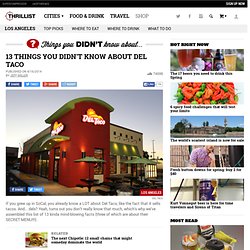 And... dels? Yeah, turns out you don't really know that much, which's why we've assembled this list of 13 kinda mind-blowing facts (three of which are about their SECRET MENU!!!). The next Chipotle: 12 small chains that might someday dominate the world Del Taco 1. 3. Best Steakhouses in America. Ever since Americans started asking "Where's the beef? 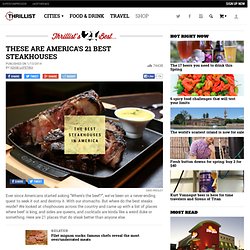 ", we've been on a never-ending quest to seek it out and destroy it. With our stomachs. But where do the best steaks reside? We looked at chophouses across the country and came up with a list of places where beef is king, and sides are queens, and cocktails are kinda like a weird duke or something. Here are 21 places that do steak better than anyone else. Filet mignon sucks: famous chefs reveal the most over/underrated meats. Best Pizza in America - 33 Best Pizzas of 2013. Whataburger Dallas - Thrillist Dallas. Of course you know Texas staple Whataburger in a general sense -- they've always been there when you've needed an early morning Honey Butter Chicken Biscuit, some late-night taquitos, or some jalapeno cheeseburgers and Monterey Melts in between. 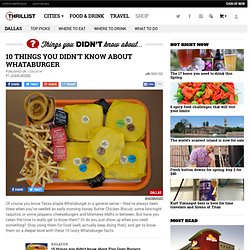 But have you taken the time to really get to know them? Or do you just show up when you need something? Stop using them for food (well, actually keep doing that), and get to know them on a deeper level with these 10 tasty Whataburger facts. Fun Facts You Didn't Know About Sonic, America's Drive-In. Five Guys Burgers & Fries - Trivia about the fast food chain. The delicious scourge of anyone with a peanut allergy, Five Guys Burgers and Fries hit the scene in 1986 as a Virginia-based family business and soon exploded into a serious national chain with more than 1000 locations. 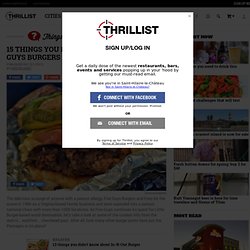 As Five Guys continues its quest for Little Burger-based world domination, let's take a look at some of the coolest info from the resto's... waitforit... checkered past. After all, how many other burger joints have put the Pentagon in its place? 13 things you didn't know about In-N-Out Burger Alpena Community College 1. Retirement Only the Beginning 2. Flickr/Daniel Parks 3. Best Burgers at Fast Food Chains. Secret Menu Items - Secret Fast Food Menu at Chipotle, Shake Shack and Others.

Fast-food chains have secrets, and we're not talking sauce (it's just Thousand Island!). 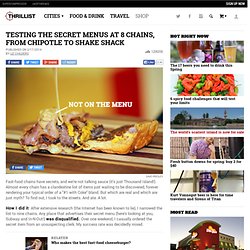 Almost every chain has a clandestine list of items just waiting to be discovered, forever rendering your typical order of a "#1 with Coke" bland. But which are real and which are just myth? To find out, I took to the streets. And ate. A lot. How I did it: After extensive research (the Internet has been known to lie), I narrowed the list to nine chains.

The Next Chipotle - Fast Growing Chain Restaurants. Best Fast Food Desserts - Ranking America's Fast Food Desserts. Sometimes you really need a proper dessert course but you don't have time to change out of your cut-off sweat shorts and Winnipeg Blue Bombers tank top, and you just want to be able to grab said dessert quickly and get back to your house to watch the Czech Republic get smoked in the Little League World Series. 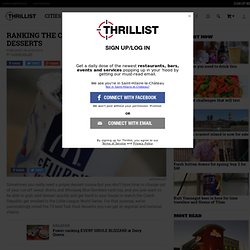 For that purpose, we've painstakingly noted the 15 best fast food desserts you can get at regional and national chains. Power-ranking EVERY SINGLE BLIZZARD at Dairy Queen Aaron Miller 15. Burger King's Hershey's Sundae Pie This thing's pretty dang inexpensive, and it's packaged so well that it's almost impossible to spill any on yourself or your car... unless you actually try to eat it, since it's so tightly packed you can't help but spill it regardless of which utensil you use. 14. 13. Power-ranking EVERY SINGLE signature flavor at Cold Stone Creamery 12. 11. 10. Healthy fast food options that taste great. Fast food can get a bum rap, especially when we're all doing what we can to get healthy (to get our bods ready for Spring Break Cancun 2014 WOOOOOOOOO!!!!!!!). But sometimes there are solid menu items that aren't nearly as bad for you as your taste buds might indicate.

So we sought out 10 different tasty, healthy-ish items that clock in at under 400 calories and 20g of fat... roughly 1/4 of the recommended daily intake for an average height, slightly lazy dude. We were pleased to discover cheese sauce. Flicker/D.L. Burger King Whopper Jr. Andy Kryza. Best fast food items - Whataburger, In-N-Out Burger, and more. In-N-Out Burger - Things You Didn't Know About the Fast-Food Chain That Breaks All the Rules.