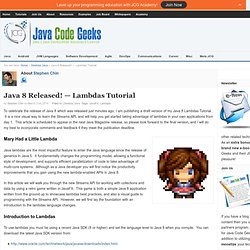 It is a nice visual way to learn the Streams API, and will help you get started taking advantage of lambdas in your own applications from day 1. This article is scheduled to appear in the next Java Magazine release, so please look forward to the final version, and I will do my best to incorporate comments and feedback if they meet the publication deadline.

Mary Had a Little Lambda Java lambdas are the most impactful feature to enter the Java language since the release of generics in Java 5. It fundamentally changes the programming model, allowing a functional style of development, and supports efficient parallelization of code to take advantage of multi-core systems. Java Reflection Tutorial. In this tutorial, I mainly write some examples to introduce what Java reflection can do. 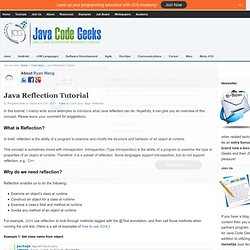 Hopefully, it can give you an overview of this concept. Please leave your comment for suggestions. What is Reflection? In brief, reflection is the ability of a program to examine and modify the structure and behavior of an object at runtime. This concept is sometimes mixed with introspection. Why do we need reflection? Reflection enables us to do the following: Examine an object’s class at runtimeConstruct an object for a class at runtimeExamine a class’s field and method at runtimeInvoke any method of an object at runtime For example, JUnit use reflection to look through methods tagged with the @Test annotation, and then call those methods when running the unit test.

In the previous article in this mini-series, we leveraged Flask to build a simple website that contains "Home" and "About" pages using a generalized workflow that we can apply to other Flask-based web apps. 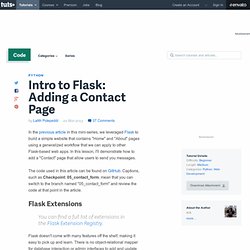 In this lesson, I'll demonstrate how to add a "Contact" page that allow users to send you messages. The code used in this article can be found on GitHub. Captions, such as Checkpoint: 05_contact_form, mean that you can switch to the branch named "05_contact_form" and review the code at that point in the article. Flask Extensions You can find a full list of extensions in the Flask Extension Registry. Flask doesn't come with many features off the shelf, making it easy to pick up and learn. Instead of shipping with extra functionality, Flask's extension model allows you to add functionality as needed. 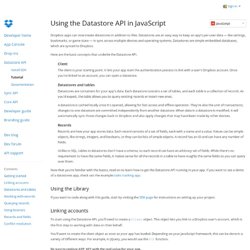 Datastores are an easy way to keep an app's per-user data — like settings, bookmarks, or game state — in sync across multiple devices and operating systems. Datastores are simple embedded databases, which are synced to Dropbox. Here are the basic concepts that underlie the Datastore API. ClientThe client is your starting point.

It lets your app start the authentication process to link with a user's Dropbox account. Now that you're familiar with the basics, read on to learn how to get the Datastore API running in your app. Using the Library If you want to code along with this guide, start by visiting the SDK page for instructions on setting up your project. Creating a datastore and your first table With a Client in hand, the next step is to open the default datastore. Ry's Git Tutorial. ‹ Back to Ry’s Git Tutorial Git is a version control system (VCS) created for a single task: managing changes to your files. 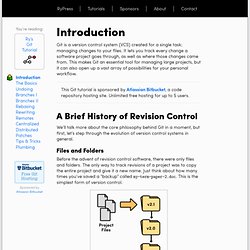 It lets you track every change a software project goes through, as well as where those changes came from. This makes Git an essential tool for managing large projects, but it can also open up a vast array of possibilities for your personal workflow. A Brief History of Revision Control We’ll talk more about the core philosophy behind Git in a moment, but first, let’s step through the evolution of version control systems in general. Files and Folders Before the advent of revision control software, there were only files and folders. But, it’s easy to see how copying files from folder to folder could prove disastrous for software developers. Local VCS So, developers began writing utility programs dedicated to managing file revisions. Centralized VCS Enter the centralized version control system (CVCS). 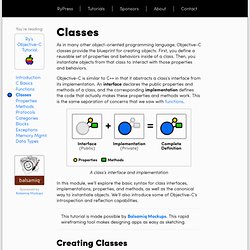