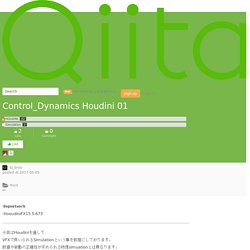 Rnd_anatomy_pt1_short. Houdini VOP raytracer part 2. Posted on August 15, 2013 Critical issue of image synthesis is to determine of the correct color of each pixel. 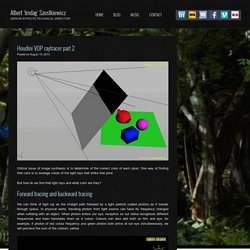 One way of finding that color is to average colors of the light rays that strike that pixel. But how do we find that light rays and what color are they? We can think of light ray as the straight path followed by a light particle (called photon) as it travels through space. In physical world, traveling photon from light source can have its frequency changed when colliding with an object. If we consider pixel on image plane, which of the photons in a 3D scene actually contribute to that pixel? This technique describes an approximation of how the real world works.

Key insight for computational efficiency is to reverse the problem by following photons backwards. At this point, we can start building our Houdini scene so we could easily follow the next steps. Houdini-help. Technical Repository. A real quick lesson on Barycentric Coordinates. 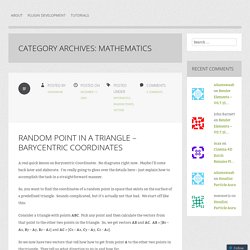 No diagrams right now. Maybe I’ll come back later and elaborate. I’m really going to gloss over the details here – just explain how to accomplish the task in a straightforward manner. So, you want to find the coordinates of a random point in space that exists on the surface of a predefined triangle. Sounds complicated, but it’s actually not that bad.

Consider a triangle with points ABC. So we now have two vectors that tell how how to get from point A to the other two points in the triangle. So, what if we start at point A, go a random percentage along the AB vector, then go another random percentage along the AC vector? Procedural Snow in Houdini. Martin Sawtell's website. Point Clouds Point clouds are one of those things in Houdini that can be confusing and unclear the first time you try to use them; people often throw the term about in many different contexts and the documentation doesn't make it clear what's going on either. 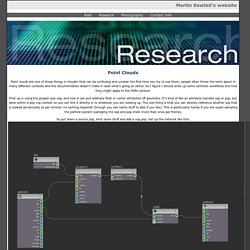 So I figure I should write up some common workflows and how they might apply to the POPs context. First up is using the pcopen pop vop, and how it can pull arbitrary float or vector attributes off geometry. It's kind of like an attribute transfer sop or pop, but done within a pop vop context so you can link it directly in to whatever you are cooking up. The cool thing is that you can directly reference another sop that is cooked dynamically as per normal- no caching required! So put down a source pop, emit some stuff and add a vop pop. Spiral Stair tutorial. 1 introduction. Francois Duchesneau さんの動画 on Vimeo. Montreal Houdini User Group » Tutorials and Demo Files. 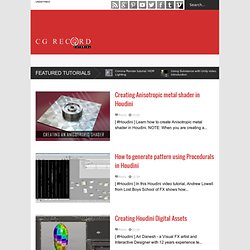 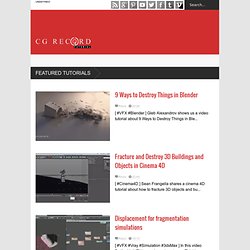 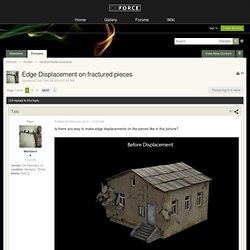 Thanks for the file. It´s downright amazing, even though I´m still trying to get everything going on there. I didn´t thought this would be so complex. I already have a couple of questions if you don´t mind. -On the first VOPSOP Matrix, where you input the normalized xax and yax, and make the cross product to get the zax (which makes a lot of sense to me), you also seem to put yax through a cross product with xax and then the result with another cross product with xax to get yax which you already had in the first place!!

- Finally, what´s the purpose for the offset matrix, if I may ask? 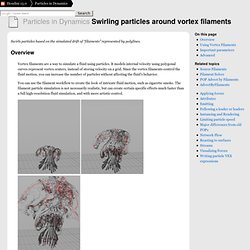 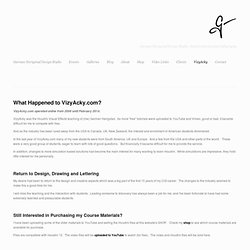 VizyAcky was the Houdini Visual Effects teaching of (me) Garman Herigstad. As more "free" tutorials were uploaded to YouTube and Vimeo, good or bad, it became difficult for me to compete with free. And as the industry has been lured away from the USA to Canada, UK, New Zealand, the interest and enrollment of American students diminished. In the last year of VizyAcky.com many of my new students were from South America, UK and Europe. And a few from the USA and other parts of the world. In addition, changes to more simulation based solutions had become the main interest for many wanting to learn Houdini. Return to Design, Drawing and Lettering My desire had been to return to the design and creative aspects which was a big part of the first 15 years of my CGI career.

I will miss the teaching and the interaction with students. Garman Herigstad. Blog — rohan dalvi creates.