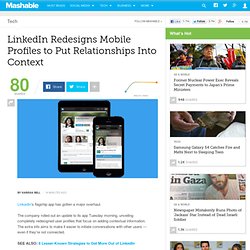 The company rolled out an update to its app Tuesday morning, unveiling completely redesigned user profiles that focus on adding contextual information. The extra info aims to make it easier to initiate conversations with other users — even if they're not connected. Profiles now have a completely overhauled "in common" section that displays contextual information about experiences, connections or groups you share with other users — including those who are not part of your connections. (Previously, this section only displayed shared connections.) "In common" may display whether you and another connection went to the same college, for example, or are members of the same LinkedIn group.

"Your LinkedIn Profile is your professional identity of record," Charlton Soesanto, mobile product manager at LinkedIn, wrote in a blog post. CardMunch Is Toast: LinkedIn Switches to Evernote for Business Cards. LinkedIn is discontinuing support for CardMunch, the business card reader app it bought in 2011 in favor of Evernote, which it says will provide more capability and functionality. 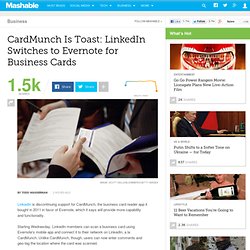 Starting Wednesday, LinkedIn members can scan a business card using Evernote's mobile app and connect it to their network on LinkedIn, a la CardMunch. Unlike CardMunch, though, users can now enter comments and geo-tag the location where the card was scanned. How to Develop a LinkedIn Content Strategy. 3 Ways to Generate Leads With LinkedIn Groups. Mashable. How to Benefit from the LinkedIn Publishing Platform. 5 Steps to Building Quality LinkedIn Connections. Are you trying to find quality leads for your business on LinkedIn? 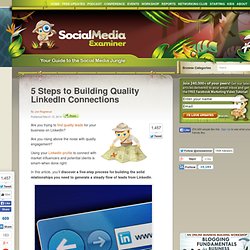 Are you rising above the noise with quality engagement? Using your LinkedIn profile to connect with market influencers and potential clients is smart–when done right. In this article, you’ll discover a five-step process for building the solid relationships you need to generate a steady flow of leads from LinkedIn. LinkedIn is a great marketing tool if you create relationships based on trust. Image source: iStockPhoto.com. #1: Get Your House in Order. LinkedIn Touts Citi’s Success As The Networking Site’s Content Marketing Ambitions Grow.

There’s been a lot of discussion and debate around the benefit to brands of building a presence on Facebook and Twitter. 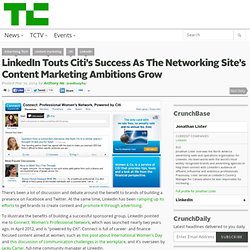 At the same time, LinkedIn has been ramping up its efforts to get brands to create content and promote it through advertising. To illustrate the benefits of building a successful sponsored group, LinkedIn pointed me to Connect: Women’s Professional Network, which was launched nearly two years ago, in April 2012, and is “powered by Citi”. Connect is full of career- and finance-focused content aimed at women, such as this post about International Women’s Day and this discussion of communication challenges in the workplace, and it’s overseen by Jacky Carter, full-time community manager at LinkedIn. Linda Descano, managing director at Citi and head of content and social, told me that the bank had been “talking to women about money, about the intersection of money and their life, since 2000” through its digital initiative Women And Co.

How to Use LinkedIn to Build Relationships and Generate Leads. Are you using LinkedIn to your advantage? 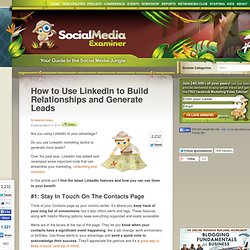 Do you use LinkedIn marketing tactics to generate more leads? Over the past year, LinkedIn has added and revamped some important tools that can streamline your marketing, networking and outreach. In this article you’ll find the latest LinkedIn features and how you can use them to your benefit. #1: Stay In Touch On The Contacts Page Think of your Contacts page as your control center. Alerts are in the boxes at the top of the page. Watch the alerts at the top of your page to keep up with and respond to your connections. Moving down the page, you’ll see a list of your contacts. You can tag, message, hide or delete connections right from the Contacts page. LinkedIn Debuts Chinese-Language Site Despite Potential Censorship. LinkedIn Now Lets You Block Other Users. LinkedIn users can now block anyone pestering them on the the platform. 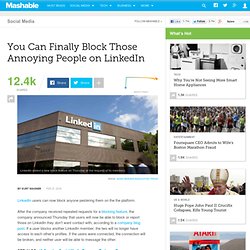 After the company received repeated requests for a blocking feature, the company announced Thursday that users will now be able to block or report those on LinkedIn they don't want contact with, according to a company blog post. If a user blocks another LinkedIn member, the two will no longer have access to each other's profiles. If the users were connected, the connection will be broken, and neither user will be able to message the other. "We know members have requested a blocking feature on LinkedIn," wrote Paul Rockwell, head of LinkedIn's trust and safety team, in the blog post. "I come to you today to assure you that your concerns were heard loud and clear. The feature works on Premium users as well, who typically have more tools like the ability to message a handful of non-connections for free each month.

The block feature doesn't make you entirely invisible, however. LinkedIn: 81% of Small and Medium-Sized Businesses Use Social Media. LinkedIn Acquires Job Matching Service Bright For $120M. LinkedIn has made its biggest acquisition deal to date today. The professional social network has purchased the job matching service Bright for $120 million, made up of 73 percent stock and 27 percent cash.After the deal closes in the first quarter of 2014, several members of Bright’s team will join LinkedIn, including its engineering and product divisions.

Existing users will be able to access their data on Bright’s website through February 28. Bright founder Eduardo Vivas said in a statement that the deal took place because “[LinkedIn] shares a similar vision and is equally obsessed about using data and algorithms to connect prospects and employers.” The one problem that Bright apparently lacked was the ability to scale. Yes, Vivas’ team had the talent in-house to build out its product and has successfully calculated billions of scores, but it didn’t have the ability to bring its technology to a much larger marketplace. The $120 million for Bright is the most LinkedIn has paid. LinkedIn launches ‘How You’re Connected’ tool on profiles to help members introduce each other. 29 January '14, 05:16pm Follow LinkedIn today launched a new “How You’re Connected” tool on profile pages that aims to help members introduce each other. 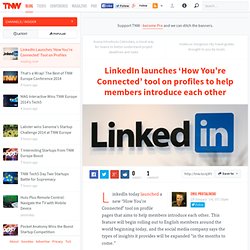 This feature will begin rolling out to English members around the world beginning today, and the social media company says the types of insights it provides will be expanded “in the months to come.” The addition means when you visit someone’s profile, you will now not only see who in your network knows them, but also how they know each other. Here is how the new feature looks like: LinkedIn hopes that by helping users find “the best path or strongest commonalities shared” between them and the person they’re interested in, it will increase the chance of forming new important contacts.