*Google: On knowing where to start. We all search Google. 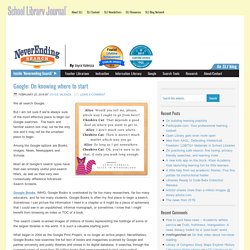 But I am not sure if we’re always sure of the most effective place to begin our Google searches. The basic and familiar search box may not be the only one and it may not be the smartest place to begin. Among the Google options are Books, Images, News, Newspapers and Scholar. *Advanced Power Searching. *AdvancedPowerSearchingQuickReference. Trillions of Questions, No Easy Answers: A (home) movie about how Google Search works. A preview of what's next for Google search. What does the future of internet search look like? 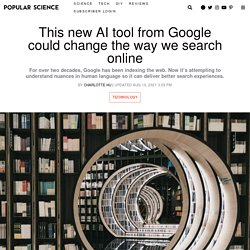 Google envisions it as looking more like a casual conversation with a friend. While Google’s search engine has been online for over two decades, the technology that powers it has been constantly evolving. Recently, the company announced a new artificial-intelligence system called MUM, which stands for Multitask Unified Model. MUM is designed to pick up the subtleties and nuances of human language at a global scale, which could help users find information they search for more easily or allow them to ask more abstract questions. Google already used MUM in an independent task to learn more about the different ways people refer to COVID vaccines, but says that the new tech is not yet part of their search system.

Here’s what to know about what MUM is, how it’s different from what’s come before, and more. Solving the COVID vaccine name game. Journalist's Toolbox. How to Search Closed Captioning on YouTube GIJN Toolbox: Searching Social Media. 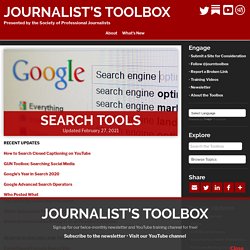 Hipster Google 2 - Even More Google Tools You Probably Never Heard Of. A couple years ago I shared my original "Hipster Google" post, where I listed a collection of lesser known Google tools. The idea was to have some fun with the "hipster" theme, where something is cool because very few people know about it. Like a band that hasn't become popular yet, or a restaurant that is hidden away, or a style that is not mainstream. At that time I put together a collection of Hipster Google tools that weren't as popular as the "big ones" such as Gmail, Drive, Docs, and such.

Even though these Google tools may have flown under the radar, they were still valuable for use in the classroom. Well since then, so many new unique Google tools have come out! *Control Alt Achieve: Hipster Google - 21 Google Tools You Probably Never Heard Of. Google is well know for certain tools and services - Search, Gmail, Calendar, Drive, Docs, Slides, Sheets, Maps, Chrome, and such. 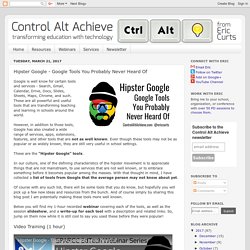 These are all powerful and useful tools that are transforming teaching and learning in schools around the world. However, in addition to those tools, Google has also created a wide range of services, apps, extensions, features, and other tools that are not as well known. Google Advanced Search Operators (and How to Use Them) *How Google Search Works (in 5 minutes) How Search Works (Matt Cutts) (OLD VERSION) *Google makes us all dumber: The neuroscience of search engines (Ian Leslie)

In 1964, Pablo Picasso was asked by an interviewer about the new electronic calculating machines, soon to become known as computers. 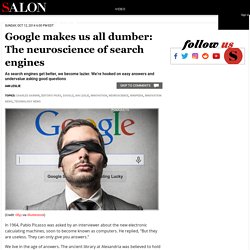 He replied, “But they are useless. The future of Google and what it means for search. 30-second summary: Something that all of us in the search industry are guilty of is our over-reliance on Google telling us what is coming next.Understanding Google’s considerations as a business, provide context to many of its recent decisions and provides a sense of what is coming down the road.Global digital agency Croud’s Organic Strategy Director discusses the future of Google, right from Google’s antitrust lawsuit to Apple as a future rival, and more. 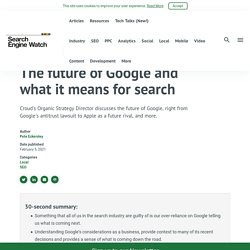 It occurs to me that I am part of a cult. Or at least, something that displays the hallmarks of one. An unchallenged authoritarian leadership, prophets and oracles who deign to share only select information from a mysterious entity, who engage in coercive behaviors, who punish for non-compliance, and followership who are indoctrinated into special teachings and practices and whom parrot back the mantras and sayings of the leaders. *Google’s new Talk to Books: Semantic search for book and idea discovery. I am truly excited about sharing this new approach to search! 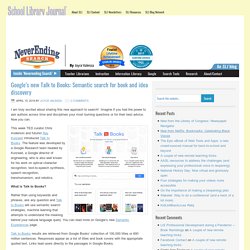 Imagine if you had the power to ask authors across time and disciplines your most burning questions or for their best advice. Now you can. This week TED curator Chri s Anderson and futurist Ray Kurzweil introduced Talk to Books. The feature was developed by a Google Research team headed by Kurzweil, a Google director of engineering, who is also well known for his work on optical character recognition, text-to-speech synthesis, speech recognition, transhumanism, and robotics.

Eight Tips to Google Like a Pro. The internet is inconceivably large. 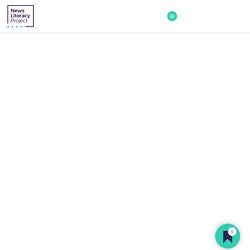 In fact, it’s essentially endless! Sometimes it’s easy to find the information you need, but often trying to find something specific can be overwhelming and feel like looking for a needle in a haystack. So we partnered with disinformation research expert Cindy Otis — also the author of True or False: A CIA Analyst’s Guide to Spotting Fake News — to bring you eight tips that can help you improve your search results and zero in on what you’re looking for more quickly.

These advanced searching skills can also help you work your way back to the original source of specific claims, quotes, photos and videos — a critical step in fact-checking things you’re unsure about online. Media Literacy Education in 2020 & Beyond. *An Animated Look at "How Google Works" [Infographic] “Have you ever wondered how Google works? 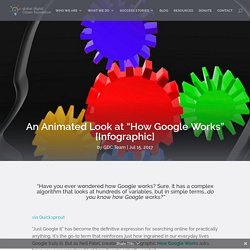 Sure, it has a complex algorithm that looks at hundreds of variables, but in simple terms…do you know how Google works?” Via Quicksprout. *Google algorithm updates 2011 to 2018. Google makes changes to its ranking algorithm almost every day. 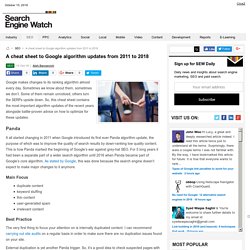 Sometimes we know about them, sometimes we don’t. Some of them remain unnoticed, others turn the SERPs upside down. Advanced Search for Librarians - Google Slides. *How Google Search Works. How to Be a Better Web Searcher: Secrets from Google Scientists (Daniel M. Russell and Mario Callegaro) In a cheery, sunshine-filled fourth-grade classroom in California, the teacher explained the assignment: write a short report about the history of the Belgian Congo at the end of the 19th century, when Belgium colonized this region of Africa. One of us (Russell) was there to help the students with their online research methods. I watched in dismay as a young student slowly typed her query into a smartphone. This was not going to end well. She was trying to find out which city was the capital of the Belgian Congo during this time period. She reasonably searched [ capital Belgian Congo ] and in less than a second she discovered that the capital of the Democratic Republic of Congo is Kinshasa, a port town on the Congo River.

The Joy of Search: A Review. At ALA this year, I had the happy experience of sitting down in the wrong session but then serendipitously hearing a worthwhile presentation by a search industry expert, Daniel M. Russell. Russell holds the title of Senior Research Scientist for Search Quality at Google and for roughly 13 years, he has actively engaged in educating users in appropriate use of various Google search tools. (One of his recent articles appeared in Scientific American.) His appearance at ALA was to generate interest in his forthcoming book, The Joy of Search (MIT Press, September 2019). I was subsequently lucky enough to receive a set of uncorrected page proofs of that title from Amy Harris of MIT Press. Russell’s book should be viewed as an educational resource for those about to embark on information literacy instruction. Chapter 11: Can You Die from Apoplexy or Rose Catarrh?

Consider what the user might do in answering the question of Abyssinia and Eritrea. Serious researchers already know that. How Search Really Works with Dr Marcia Bates by UX radio. CIL2020SearcherAcademy. CIL2020 Bates Super Searchers. CIL2019 Mary Ellen Bates. Dataset Search. *This Week in Google (Scan the latest news in video conversations) How to Be a Better Web Searcher: Secrets from Google Scientists. How to Get Better Search Results. Google Autocomplete Suggestions Are Still Racist, Sexist, and Science-Denying. How Google autocomplete works in Search. Why inappropriate predictions happen We have systems in place designed to automatically catch inappropriate predictions and not show them. However, we process billions of searches per day, which in turn means we show many billions of predictions each day. Our systems aren’t perfect, and inappropriate predictions can get through.

Where Should I Search? It Depends! Short Description: *Google's Search Quality Guidelines (Just scan) How to Go Beyond Google Discovering CI MI Research Tools (SLA) NPR: Google Plans For a Censored Search Engine In China. *Eli Pariser: Beware online "filter bubbles". *As Google Fights Fake News, Voices on the Margins Raise Alarm - The New York Times. SAN FRANCISCO — When David North, the editorial chairman of the World Socialist Web Site, noticed a drop in the site’s traffic in April, he initially chalked it up to news fatigue over President Trump or a shift in political consciousness. But when he dug into the numbers, Mr. *How Does Google Know Everything about Me? (Scientific American) Google’s new Talk to Books: Semantic search for book and idea discovery. Google Advanced Search.

An open letter to Google: Stop the censorship of the Internet! Stop the political blacklisting of the World Socialist Web Site! 25 August 2017 Sundar PichaiChief Executive OfficerGoogle, Inc. Lawrence PageChief Executive Officer/DirectorAlphabet, Inc. Sergey BrinPresident/DirectorAlphabet, Inc. Eric SchmidtExecutive Chairman of the Board of DirectorsAlphabet, Inc. Gentlemen: Google’s mission statement from the outset was “to organize the world’s information and make it universally accessible and useful.” When Google officially discontinued its China-based search engine, due to censorship by the Chinese government of search engine results for political criticism, Mr. In 2013, when Mr. Google Scholar Support for Libraries. *Gale and Google. Gale to Google Path Google Drive Tip Sheet. Who's using it: WorldCat   Bill Carney, Content Manager, WorldCat. The Advanced Google Searches Every Student Should Know - November Learning. “Did he seriously just ask that?

The Advanced Google Searches Every Student Should Know - November Learning. If Google Was A Guy (Part 5) Just for fun! Lesson Plans – Search Education – Google. 11 Google Tricks That'll Change the Way You Search - Motto. Google’s Evolution of Search, my lament, and will a giant listen? The Evolution of Search.

How Search Works. Google introduces the feed, a personalized stream of news on iOS and Android - The Verge. Hidden in Plain Sight: Information Literacy in the Age of Google. Get Things Done: 24 Google Doc Tips For Productivity -