Update Topic. My 5 Favorite Google Forms Add-ons. This morning I led a small workshop about creative uses for Google Forms and Google Slides. 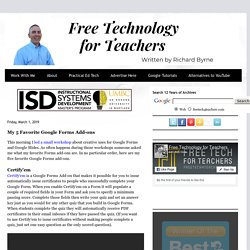 As often happens during those workshops someone asked me what my favorite Forms add-ons are. In no particular order, here are my five favorite Google Forms add-ons. Certify'emCertify'em is a Google Forms Add-on that makes it possible for you to issue automatically issue certificates to people who successfully complete your Google Form. When you enable Certify'em on a Form it will populate a couple of required fields in your Form and ask you to specify a minimum passing score. Complete those fields then write your quiz and set an answer key just as you would for any other quiz that you build in Google Forms.

The Reading Brain in the Digital Age: The Science of Paper versus Screens. In a viral YouTube video from October 2011 a one-year-old girl sweeps her fingers across an iPad's touchscreen, shuffling groups of icons. 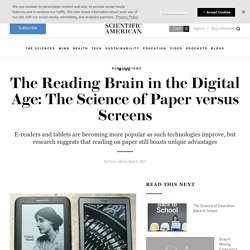 In the following scenes she appears to pinch, swipe and prod the pages of paper magazines as though they too were screens. When nothing happens, she pushes against her leg, confirming that her finger works just fine—or so a title card would have us believe. The girl's father, Jean-Louis Constanza, presents "A Magazine Is an iPad That Does Not Work" as naturalistic observation—a Jane Goodall among the chimps moment—that reveals a generational transition. "Technology codes our minds," he writes in the video's description. "Magazines are now useless and impossible to understand, for digital natives"—that is, for people who have been interacting with digital technologies from a very early age. Perhaps his daughter really did expect the paper magazines to respond the same way an iPad would.

Former Google Design Ethicist: Relying on Big Tech in Schools Is a ‘Race to the Bottom’ Early Facebook and Google Employees Form Coalition to Fight What They Built. High Schools. Tim Berners-Lee on the future of the web: 'The system is failing' How to Get Your Mind to Read. In one experiment, third graders — some identified by a reading test as good readers, some as poor — were asked to read a passage about soccer.

The poor readers who knew a lot about soccer were three times as likely to make accurate inferences about the passage as the good readers who didn’t know much about the game. That implies that students who score well on reading tests are those with broad knowledge; they usually know at least a little about the topics of the passages on the test.

One experiment tested 11th graders’ general knowledge with questions from science (“pneumonia affects which part of the body?”) , history (“which American president resigned because of the Watergate scandal?”) , as well as the arts, civics, geography, athletics and literature. Current education practices show that reading comprehension is misunderstood. First, it points to decreasing the time spent on literacy instruction in early grades. Laptops Are Great. But Not During a Lecture or a Meeting. B-ESD Educational Technology. Brain Drain: The Mere Presence of One’s Own Smartphone Reduces Available Cognitive Capacity: Journal of the Association for Consumer Research: Vol 2, No 2. We all understand the joys of our always-wired world—the connections, the validations, the laughs … the info. … But we are only beginning to get our minds around the costs. 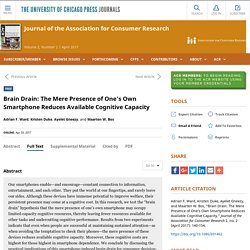 Andrew Sullivan (2016) The proliferation of smartphones has ushered in an era of unprecedented connectivity. Consumers around the globe are now constantly connected to faraway friends, endless entertainment, and virtually unlimited information. With smartphones in hand, they check the weather from bed, trade stocks—and gossip—while stuck in traffic, browse potential romantic partners between appointments, make online purchases while standing in-store, and live-stream each others’ experiences, in real time, from opposite sides of the globe. The sharp penetration of smartphones, both across global markets and into consumers’ everyday lives, represents a phenomenon high in “meaning and mattering” (e.g., Kernan 1979; Mick 2006)—one that has the potential to affect the welfare of billions of consumers worldwide.

Method. How Silicon Valley Pushed Coding Into American Classrooms - The New York Times. Have Smartphones Destroyed a Generation? - The Atlantic. One day last summer, around noon, I called Athena, a 13-year-old who lives in Houston, Texas. She answered her phone—she’s had an iPhone since she was 11—sounding as if she’d just woken up. How Google Took Over the Classroom - The New York Times. But that also caused problems in Chicago and another district when Google went looking for teachers to try a new app — effectively bypassing district administrators. In both cases, Google found itself reined in. Unlike Apple or Microsoft, which make money primarily by selling devices or software services, Google derives most of its revenue from online advertising — much of it targeted through sophisticated use of people’s data. Questions about how Google might use data gleaned from students’ online activities have dogged the company for years.

“Unless we know what is collected, why it is collected, how it is used and a review of it is possible, we can never understand with certainty how this information could be used to help or hurt a kid,” said Bill Fitzgerald of Common Sense Media, a children’s advocacy group, who vets the security and privacy of classroom apps. Google declined to provide a breakdown of the exact details the company collects from student use of its services. Mr. Mr. Silicon Valley Courts Brand-Name Teachers, Raising Ethics Issues - The New York Times. The Silicon Valley Billionaires Remaking America’s Schools - The New York Times.