NSA's XKeyscore gives one-click real-time access to almost any internet activity. Meet the NSA's New Data Centers: Russia, China, and Venezuela. Here's something the National Security Agency probably isn't happy to find in Edward Snowden's latest revelation about its activities: The surprising locations of the servers that make up the program X-KEYSCORE, which, according to one leaked agency presentation, has the ability to vacuum up nearly every move a user makes on the Internet. 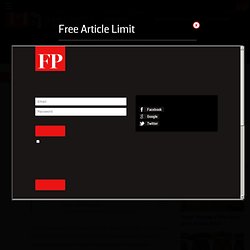 Those locations reportedly include China, Ecuador, Russia, Sudan, and Venezuela. In short, the NSA has managed to either place or gain access to servers in a collection of countries that are deeply hostile to the United States. Put another way, computer technicians in every one of those countries are probably combing through their systems right now to figure out ways to boot out the NSA. The image at the top of this post comes from Wednesday's Guardian story on X-KEYSCORE, which includes a set of slides described as internal NSA training material. Information Consumerism: The Price of Hypocrisy - Überwachung. Colvinius : Just making it official. MT... Technology - On Prism, privacy and personal data. News that the US National Security Agency has collected data from major tech firms makes Tom Chatfield wonder: is today’s internet the one we wanted, or deserve? 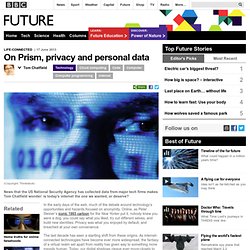 In the early days of the web, much of the debate around technology’s opportunities and hazards focused on anonymity. Online, as Peter Steiner’s iconic 1993 cartoon for the New Yorker put it, nobody knew you were a dog: you could say what you liked, try out different selves, and build new identities. Privacy was what you enjoyed by default, and breached at your own convenience. The last decade has seen a startling shift from these origins. As internet-connected technologies have become ever more widespread, the fantasy of a virtual realm set apart from reality has given way to something more messily human. In this context, privacy is not so much a matter of secrecy as of control. The west is moving towards China in its quest for mass surveillance. Anglo-American intelligence scandals, such as the one that preceded the Iraq war, are usually smothered or buried in an endless, unpublished inquiry. 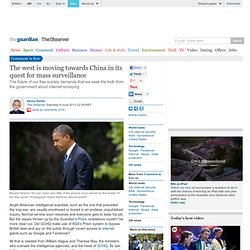 Normal service soon resumes and everyone gets to keep his job. But the issues thrown up by the Guardian's Prism revelations couldn't be more clear-cut. Did GCHQ make use of NSA's Prism system to bypass British laws and spy on the public through covert access to internet giants such as Google and Facebook? All that is needed from William Hague and Theresa May, the ministers who oversee the intelligence agencies, and the head of GCHQ, Sir Iain Lobban, is straight answers about what they knew and who authorised an operation that generated 197 intelligence reports last year. No obfuscation. No cover-up. That way, we will know that the proper checks and balances on Britain's intelligence agencies are finally being activated. Nothing less will do. In their failure to be utterly convincing, we may read a serious message for us all. 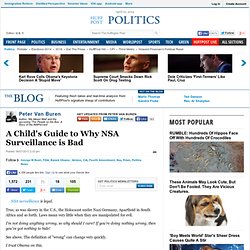 True, as was slavery in the U.S., the Holocaust under Nazi Germany, Apartheid in South Africa and so forth. Laws mean very little when they are manipulated for evil. I'm not doing anything wrong, so why should I care? If you're doing nothing wrong, then you've got nothing to hide! See above. I trust Obama on this. PRISM: Here's how the NSA wiretapped the Internet. Editor's note: The following article should be treated as strictly hypothetical. 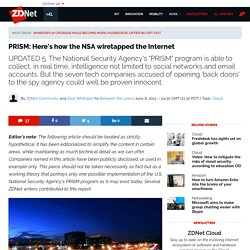 It has been editorialized to simplify the content in certain areas, while maintaining as much technical detail as we can offer. Companies named in this article have been publicly disclosed, or used in example only. This piece should not be taken necessarily as fact but as a working theory that portrays only one possible implementation of the U.S. National Security Agency's PRISM program as it may exist today. Several ZDNet writers contributed to this report.

Let's start off with what we know, and then we'll explain what we have discovered. A secret court known as the Foreign Intelligence Surveillance Court (FISC), created under the Foreign Intelligence Surveillance Act 1978 and subsequently amended by the Patriot Act in 2001, forced Verizon to hand over "tangible things" to the U.S. The news was first reported by London, U.K. U.S., British intelligence mining data from nine U.S. Internet companies in broad secret program. The National Security Agency and the FBI are tapping directly into the central servers of nine leading U.S. 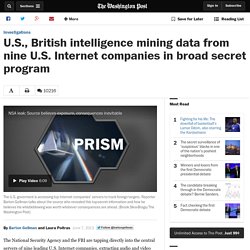 Internet companies, extracting audio and video chats, photographs, e-mails, documents, and connection logs that enable analysts to track foreign targets, according to a top-secret document obtained by The Washington Post. The program, code-named PRISM, has not been made public until now. It may be the first of its kind. The NSA prides itself on stealing secrets and breaking codes, and it is accustomed to corporate partnerships that help it divert data traffic or sidestep barriers. But there has never been a Google or Facebook before, and it is unlikely that there are richer troves of valuable intelligence than the ones in Silicon Valley. 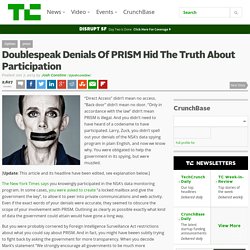 “Back door” didn’t mean no door. “Only in accordance with the law” didn’t mean PRISM is illegal. And you didn’t need to have heard of a codename to have participated. NSA scandal: what data is being monitored and how does it work? What is the scandal? 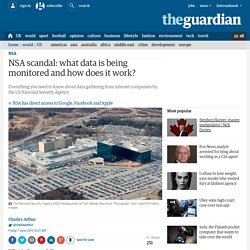 The US's National Security Agency (NSA), its wiretapping agency, has been monitoring communications between the US and foreign nationals over the internet for a number of years, under a project called Prism. Some of the biggest internet companies, from Apple to Google to Yahoo, are involved. PRISM scandal: tech giants flatly deny allowing NSA direct access to servers.

Executives at several of the tech firms said they had never heard of PRISM until they were contacted by the Guardian Two different versions of the PRISM scandal were emerging on Thursday with Silicon Valley executives denying all knowledge of the top secret program that gives the National Security Agency direct access to the internet giants' servers. The eavesdropping program is detailed in the form of PowerPoint slides in a leaked NSA document, seen and authenticated by the Guardian, which states that it is based on "legally-compelled collection" but operates with the "assistance of communications providers in the US. " Each of the 41 slides in the document displays prominently the corporate logos of the tech companies claimed to be taking part in PRISM. However, senior executives from the internet companies expressed surprise and shock and insisted that no direct access to servers had been offered to any government agency.

An Apple spokesman said: "We have never heard of PRISM. NSA Prism program taps in to user data of Apple, Google and others.