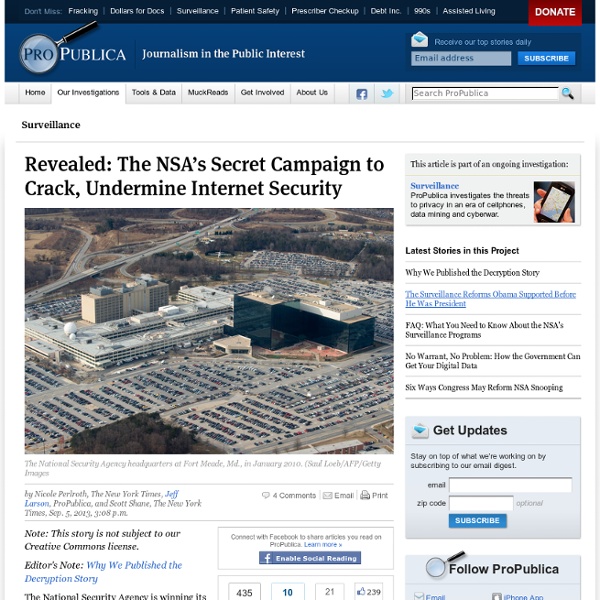 The National Security Agency headquarters at Fort Meade, Md., in January 2010. (Saul Loeb/AFP/Getty Images Sept. 6: This story has been updated with a response from the Office of the Director of National Intelligence [2]. The National Security Agency is winning its long-running secret war on encryption, using supercomputers, technical trickery, court orders and behind-the-scenes persuasion to undermine the major tools protecting the privacy of everyday communications in the Internet age, according to newly disclosed documents. This story has been reported in partnership between The New York Times [3], the Guardian [4] and ProPublica based on documents obtained by The Guardian. For the Guardian: James Ball, Julian Borger, Glenn Greenwald For the New York Times: Nicole Perlroth, Scott Shane For ProPublica: Jeff Larson The N.S.A. hacked into target computers to snare messages before they were encrypted. An intelligence budget document makes clear that the effort is still going strong.

The US government has betrayed the internet. We need to take it back | Bruce Schneier Government and industry have betrayed the internet, and us. By subverting the internet at every level to make it a vast, multi-layered and robust surveillance platform, the NSA has undermined a fundamental social contract. The companies that build and manage our internet infrastructure, the companies that create and sell us our hardware and software, or the companies that host our data: we can no longer trust them to be ethical internet stewards. This is not the internet the world needs, or the internet its creators envisioned. We need to take it back. And by we, I mean the engineering community. Yes, this is primarily a political problem, a policy matter that requires political intervention. But this is also an engineering problem, and there are several things engineers can – and should – do. One, we should expose. We need to know how exactly how the NSA and other agencies are subverting routers, switches, the internet backbone, encryption technologies and cloud systems.

Comment on NSA Effort to Defeat Encryption Worldwide September 5, 2013 FOR IMMEDIATE RELEASE CONTACT: 212-549-2666, media@aclu.org WASHINGTON – In an effort to defeat encrypted communications worldwide, the National Security Agency has manipulated U.S. and global encryption standards; utilized supercomputers to break open encrypted communications and data; and has persuaded, and sometimes forced, technology and Internet service providers to give it access to protected data, according to reports published today in The Guardian and The New York Times in partnership with ProPublica. "The encryption technologies that the NSA has exploited to enable its secret dragnet surveillance are the same technologies that protect our most sensitive information, including medical records, financial transactions, and commercial secrets," said Christopher Soghoian, principal technologist of the ACLU's Speech, Privacy and Technology Project." For more information on the ACLU's work on NSA surveillance: aclu.org/time-rein-surveillance-state-0

Web Conferences-Privacy Conference The Risks in Assessing Risks Free to IAPP Members: IAPP Global Privacy Summit “Best of” Reprise session 60-minute recording made available on Thursday, April 10 Companies have embraced risk management to an unprecedented degree and with real benefits. What you’ll take away: The common traps that people fall into when identifying risk Techniques for avoiding common mistakes that can skew risk assessments The value of thinking of approaches that cover a wide range of potential risks Virtual Panelist:Adam Turteltaub, Society of Corporate Compliance & Ethics Order Now Big Data, Privacy and Intangible Assets Free to IAPP Members 60-minute recording made available on Thursday, April 10, 2014 We know that personalised data and databases are valuable, but how valuable are they? What will be covered: The application of data protection law can dramatically affect company valutations.Those valuations can be affected up as well as down. Order Now Vendor Management and Assurance Broadcast Date: Thursday, April 3