Catalog Reveals NSA Has Back Doors for Numerous Devices 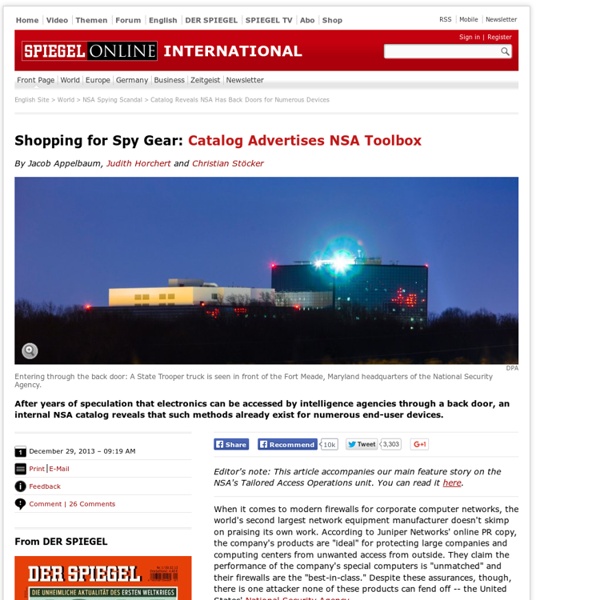 Editor's note: This article accompanies our main feature story on the NSA's Tailored Access Operations unit. You can read it here. When it comes to modern firewalls for corporate computer networks, the world's second largest network equipment manufacturer doesn't skimp on praising its own work. According to Juniper Networks' online PR copy, the company's products are "ideal" for protecting large companies and computing centers from unwanted access from outside. They claim the performance of the company's special computers is "unmatched" and their firewalls are the "best-in-class." A 50-Page Catalog These NSA agents, who specialize in secret back doors, are able to keep an eye on all levels of our digital lives -- from computing centers to individual computers, and from laptops to mobile phones. This, at least, is the impression gained from flipping through the 50-page document. In the case of Juniper, the name of this particular digital lock pick is "FEEDTROUGH." Master Carpenters

NSA reportedly intercepting laptops purchased online to install spy malware According to a new report from Der Spiegel based on internal NSA documents, the signals intelligence agency's elite hacking unit (TAO) is able to conduct sophisticated wiretaps in ways that make Hollywood fantasy look more like reality. The report indicates that the NSA, in collaboration with the CIA and FBI, routinely and secretly intercepts shipping deliveries for laptops or other computer accessories in order to implant bugs before they reach their destinations. According to Der Spiegel, the NSA's TAO group is able to divert shipping deliveries to its own "secret workshops" in a method called interdiction, where agents load malware onto the electronics or install malicious hardware that can give US intelligence agencies remote access. This tool, among others, is available to NSA agents through what Der Spiegel describes as a mail-order spy catalog. Sometimes the NSA hops on an FBI jet for high-tech raids

How the NSA (may have) put a backdoor in RSA’s cryptography: A technical primer There has been a lot of news lately about nefarious-sounding backdoors being inserted into cryptographic standards and toolkits. One algorithm, a pseudo-random bit generator, Dual_EC_DRBG, was ratified by the National Institute of Standards and Technology (NIST) in 2007 and is attracting a lot of attention for having a potential backdoor. This is the algorithm into which the NSA allegedly inserted a backdoor and then paid RSA to use. So how is that possible? This is a technical primer that explains what a backdoor is, how easy it can be to create your own, and the dangerous consequences of using a random number generator that was designed to have a backdoor. This is necessarily a long technical discussion, but hopefully by the end it should be clear why Dual_EC_DRBG has such a bad reputation. Backdoors The concept of a backdoor has cast a shadow over the security industry for a long time. In theory, a well-designed cryptographic system does not include a backdoor. Random weakness

The NSA's Secret Role in the U.S. Assassination Program Credit: Kirsty Wigglesworth/Associated Press. The National Security Agency is using complex analysis of electronic surveillance, rather than human intelligence, as the primary method to locate targets for lethal drone strikes – an unreliable tactic that results in the deaths of innocent or unidentified people. According to a former drone operator for the military’s Joint Special Operations Command (JSOC) who also worked with the NSA, the agency often identifies targets based on controversial metadata analysis and cell-phone tracking technologies. Rather than confirming a target’s identity with operatives or informants on the ground, the CIA or the U.S. military then orders a strike based on the activity and location of the mobile phone a person is believed to be using. His account is bolstered by top-secret NSA documents previously provided by whistleblower Edward Snowden. “Once the bomb lands or a night raid happens, you know that phone is there,” he says.

The Day We Fight Back - February 11th 2014 BREAKING: Maryland Legislators Move To Kill NSA Headquarters NSA National Headquarters ANNAPOLIS, Md., February 10, 2014– It’s lights out for the National Security Agency (NSA). State lawmakers in Maryland have filed emergency status legislation that seeks to cut the NSA’s Ft. Meade headquarters off from all material support stemming from the state. “Maryland has almost become a political subdivision of the NSA,” Tenth Amendment Center Executive Director Michael Boldin said in a statement. “The agency relies heavily on state and local help. House Bill 1074 (HB1074) would ban the NSA facility from all public state utilities, ban the use of NSA collected evidence in court, ban universities from partnering with the NSA and ban all political subdivisions from assisting the NSA from within the state. Any state entity, employee or contractor refusing to comply with the law would be immediately fired and banned from all future contracts within the state. The bill has eight Republican sponsors and has been referred to the House Judiciary Committee.

TheSoulfulEMU : .@3F_Bildideen @Heatherburns201... TheSoulfulEMU : .@3F_Bildideen @Heatherburns201... TheSoulfulEMU : #NSA is just right behind you! Growing Demand For German Email Providers After NSA Scandal In the wake of the NSA surveillance revelations, Internet users seem to have learned that as soon as their data reaches an American server, it could be read by the country's intelligence services. German companies are benefiting from this realization -- German email providers have seen a significant increase in new subscribers in recent weeks. Freenet, a listed telecommunications provider known for its strong anonymity protection, has seen an 80 percent increase in new users over the last three weeks. T-Online, a business unit of Deutsche Telekom and the biggest internet service provider in Germany, would not confirm their exact number of new joiners, but also pointed to a "stronger interest" in its email service. Email Made in Germany The increased interest in German email providers may be linked to a recent push to promote the country's data networks as some of the most secure in the world. The move left some 300,000 users with defunct email accounts. Expert Opinion

Tech Hubs Flourish Outside of Silicon Valley Silicon Valley has long been at the forefront of the tech startup scene, but thanks to the growth of emerging companies in other areas of the U.S. and worldwide, the West Coast is no longer the only tech hub sparking startups and innovation. In fact, according to a report by financial research analyst firm PrivyCo., there were more than 100 acquisitions of tech startups in New York City last year, amounting to $8.3 billion. The city is now only positioned second behind Silicon Valley in terms of startup acquisitions. And thanks to the expansion of larger companies such as Facebook and Google to the New York area, this is only the beginning of the bigger trend. To help facilitate economic growth in each of the five boroughs, the New York City Economic Development Corporation is following the startup movement closely. The organization has been focused on building an engineering campus — called NYC Tech Campus (Applied Sciences NYC) — in the boroughs.