Edward Snowden's not the story. The fate of the internet is 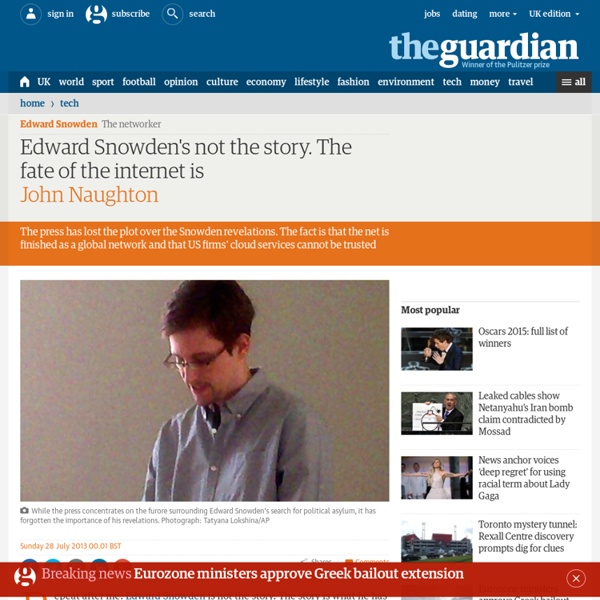 Repeat after me: Edward Snowden is not the story. The story is what he has revealed about the hidden wiring of our networked world. This insight seems to have escaped most of the world's mainstream media, for reasons that escape me but would not have surprised Evelyn Waugh, whose contempt for journalists was one of his few endearing characteristics. The obvious explanations are: incorrigible ignorance; the imperative to personalise stories; or gullibility in swallowing US government spin, which brands Snowden as a spy rather than a whistleblower. In a way, it doesn't matter why the media lost the scent. What matters is that they did. Similarly, without Snowden, we would not be debating whether the US government should have turned surveillance into a huge, privatised business, offering data-mining contracts to private contractors such as Booz Allen Hamilton and, in the process, high-level security clearance to thousands of people who shouldn't have it. That's all at nation-state level.

NSA files decoded: Edward Snowden's surveillance revelations explained | World news Two factors opened the way for the rapid expansion of surveillance over the past decade: the fear of terrorism created by the 9/11 attacks and the digital revolution that led to an explosion in cell phone and internet use. But along with these technologies came an extension in the NSA’s reach few in the early 1990s could have imagined. Details that in the past might have remained private were suddenly there for the taking. Chris Soghoian Principal technologist, ACLU NSA is helped by the fact that much of the world’s communications traffic passes through the US or its close ally the UK – what the agencies refer to as “home-field advantage”. The Snowden documents show that the NSA runs these surveillance programs through “partnerships” with major US telecom and internet companies. The division inside the NSA that deals with collection programs that focus on private companies is Special Source Operations, described by Snowden as the “crown jewels” of the NSA. Jeremy Scahill Fiber-optic cable

Snowden 2.0: New Active Duty NSA Whistleblower? Perhaps one of the most striking and revelatory aspects about the latest NSA surveillance news story, this one published Sunday by The Bild am Sonntag newspaper in Germany, was that it was not based on leaked documents from the now famous NSA whistleblower Edward Snowden. What the paper reported, based on information provided by a “high-ranking NSA employee in Germany,” was that the U.S. spy agency—after being outed for spying on German ChancellorAngela Merkel—responded to an order to refrain from spying directly on Merkel’s phone by intensifying its monitoring of other high-level officals her government. “We have had the order not to miss out on any information now that we are no longer able tomonitor the chancellor’s communication directly,” the source told the newspaper. And Seth Millstein, writing at the Bustle, explains why the importance of the Bild am Sonntagreporting is two-fold: First, if this report is true, the NSA is apparently hell-bent on spying on Germany’s top officials.

Edward Snowden, A Truth Unveiled (Documentary) French prosecutor investigates U.S. Prism spying scheme What Obama Really Meant Was ... - Chris Hedges What Obama Really Meant Was ... Posted on Jan 19, 2014 By Chris Hedges (Page 2) In the 1960s, the U.S. government spied on civil rights leaders, the Black Panthers, the American Indian Movement and critics of the Vietnam War, just as today we are spying on Occupy activists, environmentalists, whistle-blowers and other dissidents. The fall of the Soviet Union left America without a competing superpower. Threats to the nation raised new legal and policy questions, which fortunately our courts, abject tools of the corporate state, solved by making lawful everything from torture to wholesale surveillance. New and Improved Comments If you have trouble leaving a comment, review this help page.

The Liberal Surveillance State Long time readers of Sean Wilentz will remember him for greatest hits like his notorious piece on the “cutthroat, fraudulent politics that lie at the foundation of Obama’s supposedly uplifting campaign,” involving “the most outrageous deployment of racial politics since the Willie Horton ad campaign in 1988 and the most insidious since Ronald Reagan kicked off his 1980 campaign in Philadelphia, Mississippi, praising states’ rights,” or his claim that not only was Obama’s “most obvious change to liberal politics” the color of his skin, but Obama was the second coming of Jimmy Carter and a starry-eyed Russia-hugger to boot. So it’s very, very weird to see Wilentz criticizing Edward Snowden on the grounds that his “disgruntlement with Obama … was fueled by a deep disdain for progressive politics” – given his own track record on Obama’s brand of progressivism, why on earth would he believe this to be a problem? The article comes in three main parts. First – the promise:

British Spies Said to Intercept Yahoo Webcam Images SAN FRANCISCO — A British intelligence agency collected video webcam images — many of them sexually explicit — from millions of Yahoo users, regardless of whether they were suspected of illegal activity, according to accounts of documents leaked by Edward J. Snowden. The surveillance effort operated by Britain’s Government Communications Headquarters, or GCHQ, was code-named Optic Nerve. Images from Yahoo webcam chats were captured in bulk through the agency’s fiber-optic cable taps and saved to a GCHQ database. It is unclear how much of the data was shared with American officials at the National Security Agency, though the British ran queries of the data using a search tool provided by the N.S.A. called XKeyscore, according to a report on Thursday by The Guardian. The report did not indicate whether the agency also collected webcam images from similar services, such as Google Hangouts or Microsoft’s Skype. Photo The program posed unique challenges.

U.S. officials 'personally believe' Russian spies helped Snowden A U.S. Congressmen revealed to NBC Sunday that an investigation is underway to determine whether Edward Snowden was aided by Russia in the theft of top-secret U.S. National Security Agency files. Rep. Mike Rogers (R-Mich.), chairman of the House Intelligence Committee, told NBC’s Meet the Press, “I believe there’s a reason he ended up in the hands—the loving arms—of an FSB agent in Moscow,” referring to a member of Russia’s top security service. Snowden currently resides in Russia, where he was granted temporary asylum after leaking tens of thousands of classified documents to reporter Glenn Greenwald. Rogers offered nothing conclusive to back up his allegations while on air. Sen. Rep. According to Reuters, U.S. security officials said as recently as last week that there is no evidence Snowden collaborated with foreign agents while obtaining or leaking any classified documents. In October, Snowden told the New York Times that none of the NSA material was carried with him into Russia.

What Edward Snowden Leaked Was Nothing Compared to What He Didn’t A copy of the FISA court order requiring Verizon to give the NSA information on the telephone calls of Verizon customers. (AP Photo) This article originally appeared at TomDispatch.com. To stay on top of important articles like these, sign up to receive the latest updates from TomDispatch.com. Here, at least, is a place to start: intelligence officials have weighed in with an estimate of just how many secret files National Security Agency contractor Edward Snowden took with him when he headed for Hong Kong last June. Such figures should stagger us and what he did take will undoubtedly occupy journalists for months or years more (and historians long after that). And keep something else in mind: that’s just intelligence agencies. We do know that, in 2011, the whole government reportedly classified 92,064,862 documents. Summoned From the Id of the National Security State In a sense, valuable as they have been, Snowden’s revelations have helped promote this delusion.

Edward Snowden’s Brave Integrity Exclusive: President Obama says he welcomes the debate on post-9/11 surveillance of Americans and the world, but that debate was only made meaningful by the disclosures of NSA whistleblower Edward Snowden, who was then indicted and sought asylum in Russia, where he just met with some ex-U.S. intelligence officials, including Ray McGovern. By Ray McGovern I’ve had a couple of days to reflect after arriving back from Moscow where my whistleblower colleagues Coleen Rowley, Jesselyn Radack, Tom Drake and I formally presented former National Security Agency contractor Edward Snowden with the annual Sam Adams Associates award for integrity in intelligence. The thought that companioned me the entire time was the constant admonition of my Irish grandmother: “Show me your company, and I’ll tell you who you are!” NSA whistleblower Edward Snowden speaking in Moscow on Oct. 9, 2013, after receiving an award from an organization of former U.S. intelligence officials. Compelled? American Traditions

Snowden: UK government now leaking documents about itself | Glenn Greenwald (Updated below) The Independent this morning published an article - which it repeatedly claims comes from "documents obtained from the NSA by Edward Snowden" - disclosing that "Britain runs a secret internet-monitoring station in the Middle East to intercept and process vast quantities of emails, telephone calls and web traffic on behalf of Western intelligence agencies." This is the first time the Independent has published any revelations purportedly from the NSA documents, and it's the type of disclosure which journalists working directly with NSA whistleblower Edward Snowden have thus far avoided. That leads to the obvious question: who is the source for this disclosure? Snowden this morning said he wants it to be clear that he was not the source for the Independent, stating: I have never spoken with, worked with, or provided any journalistic materials to the Independent. Related question Or is this some newly created standard of criminality that applies only to our NSA reporting?