NSA scandal: what data is being monitored and how does it work? 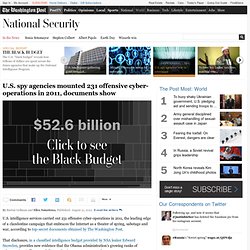 Budget documents say the $652 million project has placed “covert implants,” sophisticated malware transmitted from far away, in computers, routers and firewalls on tens of thousands of machines every year, with plans to expand those numbers into the millions. The documents provided by Snowden and interviews with former U.S. officials describe a campaign of computer intrusions that is far broader and more aggressive than previously understood.

The Obama administration treats all such cyber-operations as clandestine and declines to acknowledge them. The scope and scale of offensive operations represent an evolution in policy, which in the past sought to preserve an international norm against acts of aggression in cyberspace, in part because U.S. economic and military power depend so heavily on computers. 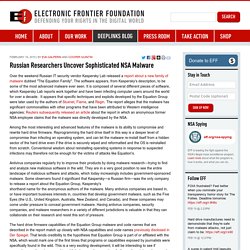 The software appears, from Kaspersky's description, to be some of the most advanced malware ever seen. It is composed of several different pieces of software, which Kaspersky Lab reports work together and have been infecting computer users around the world for over a decade.

Affaire Snowden, la NSA va remplacer 90% de ses informaticiens p. A Taxonomy of PRISM Possibilities. What We Don't Know About Spying on Citizens: Scarier Than What W. The NSA: Even Worse Than You Think! Le Petit Journal du 23/09 - Ras-le-bol. I Spent Two Hours Talking With the NSA's Bigwigs. Here's What Has Them Mad. NSA headquarters. 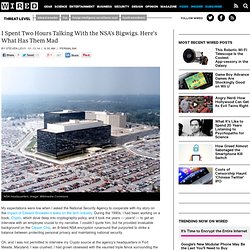 Image: Wikimedia Commons My expectations were low when I asked the National Security Agency to cooperate with my story on the impact of Edward Snowden’s leaks on the tech industry. During the 1990s, I had been working on a book, Crypto, which dove deep into cryptography policy, and it took me years — years! — to get an interview with an employee crucial to my narrative. I couldn’t quote him, but he provided invaluable background on the Clipper Chip, an ill-fated NSA encryption runaround that purported to strike a balance between protecting personal privacy and maintaining national security. Oh, and I was not permitted to interview my Crypto source at the agency’s headquarters in Fort Meade, Maryland.

This time around, the NSA’s initial comeback was discouraging. Um, yes. Why the turnaround? They really hate Snowden. NSA Agents Told To Withhold Target Information From Those In Charge Of Oversight. There's so much information that's coming out of last night's Washington Post bombshell that just continues to yield incredible information about what defenders of these programs have been saying as compared to what's actually happening. 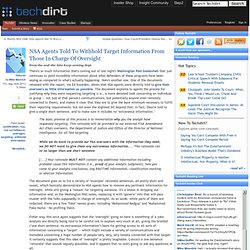 Here's another one. One of the documents released with the report, via Ed Snowden, shows that NSA agents were directly told to give their overseers as little information as possible. The document explains to agents the process for justifying why they were requesting targeting (i.e., a more detailed look concerning an individual or group -- not just at that person's communications, but potentially anyone even remotely connected to them), and makes it clear that they are to give the bare minimum necessary to fulfill their reporting requirements, but not even the slightest bit beyond that.

In fact, they're told to give a single short sentence, and to make sure it includes no "extraneous information. "

PRISM: The real concern is that governments may not be breaking

TV Message by Snowden Says Privacy Still Matters. Secret NSA spy programs exposed at conference in Germany. NSA collect of millions of photos. A Tale of Two NSA Leaks One is unsurprising, and damaging. Snowden’s biggest revelation: We don’t know what power is anymore, nor do we care. Wiebe: Who broke the law, Snowden or NSA? Related collections NSA/PRISM. Former NSA agent tweets 21 rules of syping. How the NSA, and your boss, can intercept and break SSL. The NSA Can Only Spy With A Little Help From Its Feds. This week the ACLU published a damning report chronicling the many ways the FBI has abused post-9/11 authorities to spy on everyday Americans. 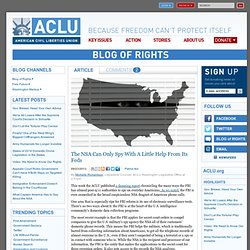 As we noted, the FBI is even enmeshed in the broad suspicionless NSA dragnet of American phone calls. One area that is especially ripe for FBI reform is its use of electronic surveillance tools.

Web Inventor Speaks Out On PRISM

The NSA files. Campaign notebook: 2006: the US bank data scandal and the Great- Government surveillance programs renew debate about oversight. NYorker OUR REFLECTION IN THE N.S.A.’S PRISM. b444b0a8-4436-4802-921e-5c3177bfc0eb-460x276.jpeg 460×276 pixels. Evolution of the PRISM. denials. Through a PRISM darkly: Tracking the ongoing NSA surveillance st. Big Data Surveillance and Why Privacy Pros Ought To Pay Attention to the PCLOB. This week, Congress finally acted to bring the U.S. 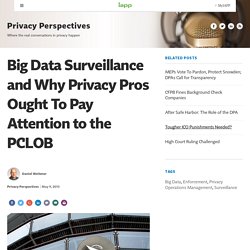 Privacy and Civil Liberties Oversight Board (PCLOB) to its full strength and enable it to begin its critical mission. With the confirmation Tuesday of David Medine as chair of the PCLOB, Medine and his distinguished bipartisan group of colleagues will finally be able to begin their work in earnest. The PCLOB is a vital guardian of Americans’ privacy rights and civil liberties. As an independent voice for privacy and civil liberties, it will oversee executive branch activities with civil liberties implications, including intelligence, counter-terrorism and law enforcement activities. The PCLOB will also offer guidance to the president and federal agencies on ways to ensure that counterterrorism practices respect basic constitutional protections principles.