A-mercury-problem-lurks-in-the-earths-thawing-permafrost. The irony: ConocoPhillips hopes to freeze thawing permafrost to drill more oil By Shannon Osaka on Aug 19, 2020 at 3:56 am. Living on a heating planet always comes with some ironies. 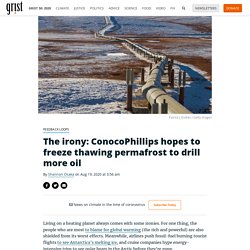 For one thing, the people who are most to blame for global warming (the rich and powerful) are also shielded from its worst effects. Meanwhile, airlines push fossil-fuel burning tourist flights to see Antarctica’s melting ice, and cruise companies hype energy-intensive trips to see polar bears in the Arctic before they’re gone. PERMAFROST - LA BOMBE CLIMATIQUE & L'HYPOTHESE ZIMOV - S02 E09 - Le 19 juillet 2020[ NEXT ]

Arctic forecast: Sunny with a higher chance of carbon emissions By Alexandria Herr on Jun 24, 2020 at 3:55 am. Thawing permafrost might result in more carbon emissions than previously thought. 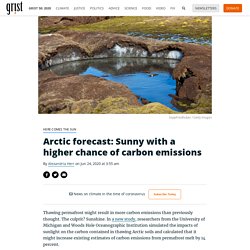 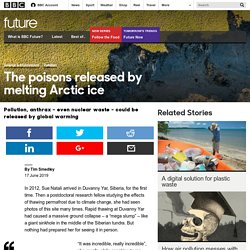 Then a postdoctoral research fellow studying the effects of thawing permafrost due to climate change, she had seen photos of this site many times. Rapid thawing at Duvanny Yar had caused a massive ground collapse – a “mega slump” – like a giant sinkhole in the middle of the Siberian tundra. But nothing had prepared her for seeing it in person. As you walk along you see what look like logs poking out the permafrost. But they aren’t logs, they are the bones of mammoths and other Pleistocene animals – Sue Natali “It was incredible, really incredible”, she recalls while speaking to me from The Woods Hole Research Center, Massachusetts, where she is an associate scientist.

The chilling science on Alaska’s melting permafrost. Up to a quarter of the permafrost that lies just under the ground surface in Alaska could thaw by the end of the century, releasing long-trapped carbon that could make its way into the atmosphere and exacerbate global warming, a new study finds. 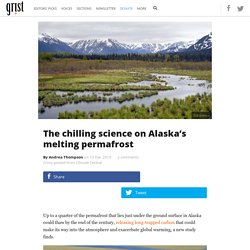 The study, detailed in the journal Remote Sensing of Environment, maps where that near-surface permafrost lies across Alaska in more detail than previous efforts. That detail could help determine where to focus future work and what areas are at risk of other effects of permafrost melt, such as changes to local ecosystems and threats to infrastructure, the study’s authors say. Permafrost may not be the ticking “carbon bomb” scientists once thought. This story was originally published by the Guardian and is reproduced here as part of the Climate Desk collaboration.

The ‘carbon bomb’ stored in the thawing Arctic permafrost may be released in a slow leak as global warming takes hold, rather than an eruption, according to new research. 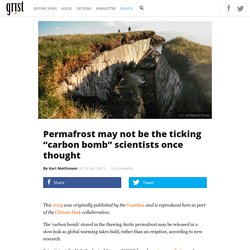 Scientists at the U.S. Geological Survey (USGS) found previous predictions of a catastrophic release of carbon dioxide and methane into the atmosphere as permafrost thaws may have been overstated. Thawing permafrost could be the worst climate threat you haven’t heard of. Some things get better when you take them out of the freezer. 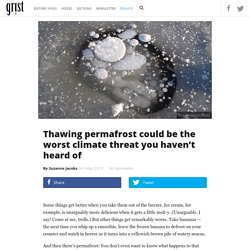 Ice cream, for example, is unarguably more delicious when it gets a little melt-y. (Unarguably, I say! Come at me, trolls.) But other things get remarkably worse. Take bananas — the next time you whip up a smoothie, leave the frozen banana to defrost on your counter and watch in horror as it turns into a yellowish brown pile of watery mucus. D'incroyables bulles apparaissent sous la surface d'un lac gelé au Canada. A BP spill’s worth of methane is leaking from the ocean off of Washington every year. You know how ocean temperatures have been on the rise lately? 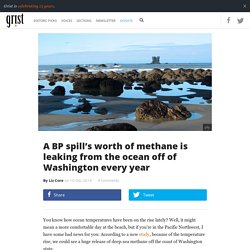 Well, it might mean a more comfortable day at the beach, but if you’re in the Pacific Northwest, I have some bad news for you: According to a new study, because of the temperature rise, we could see a huge release of deep-sea methane off the coast of Washington state. Melting Permafrost Endangers Greenland and Releases Harmful, Disease-Causing Bacteria  People love stories. 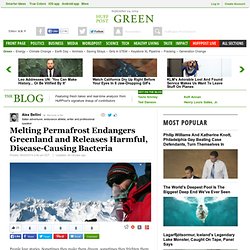 Sometimes they make them dream, sometimes they frighten them, but stories always make people think. The story I want to tell is the story of a small village in Greenland, Uummannaq. Antarctica’s permafrost is melting. Things are getting ugly on Earth’s underside. 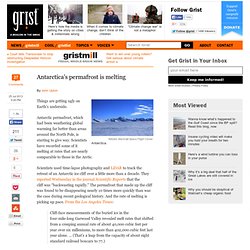 Antarctic permafrost, which had been weathering global warming far better than areas around the North Pole, is starting to give way. Permafrost thaw exacerbates climate change. The climate is warming in the arctic at twice the rate of the rest of the globe creating a longer growing season and increased plant growth, which captures atmospheric carbon, and thawing permafrost, which releases carbon into the atmosphere. 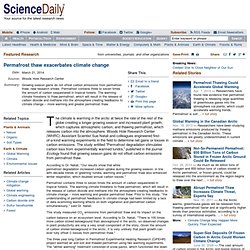 Arctic Methane Emissions 'Certain to Trigger Warming' As climate change melts Arctic permafrost and releases large amounts of methane into the atmosphere, it is creating a feedback loop that is "certain to trigger additional warming," according to the lead scientist of a new study investigating Arctic methane emissions. The study released this week examined 71 wetlands across the globe and found that melting permafrost is creating wetlands known as fens, which are unexpectedly emitting large quantities of methane. Over a 100-year timeframe, methane is about 35 times as potent as a climate change-driving greenhouse gas than carbon dioxide, and over 20 years, it's 84 times more potent.

Les cratères géants de Sibérie sont-ils dus au réchauffement climatique. Sunlight stimulates release of carbon dioxide in melting permafrost. Regions of melted permafrost in the Arctic. (Rose Cory / PNAS ) Ancient plant and animal matter trapped within Arctic permafrost can be converted rapidly into climate-warming carbon dioxide when melted and exposed to sunlight, according to a new study. In a report published Monday in the Proceedings of the National Academy of Sciences, a team of environmental and biological scientists examined 27 melting permafrost sites in Alaska and found that bacteria converted dissolved organic carbon materials into the greenhouse gas CO2 40% faster when exposed to ultraviolet light. Another reason to worry about methane: It’s leaking out of the Arctic Ocean hella fast. We learned last week that Al Gore has become a vegan, and speculated that it might be because methane emissions from livestock are a surprisingly large driver of climate change.

Sur une superficie relativement petite, nous en avons trouvé plus de 100, à l'échelle de la région il doit y en avoir des milliers. Melting Sea Ice Causes Spike In Arctic Air Pollution. As our use of fossil fuels continues to exacerbate global climate change, we’re starting to see the quantifiable effects of our rapidly warming planet. One of the most obvious effects is the rapid decline in arctic sea ice, one of the earth’s largest carbon sinks and a catalyst of life for beings all over the planet.

This melting ice spells disaster for polar bears and other animals that depend on it for food and shelter. Immense Algae Bloom Signals Major Change in Arctic. NOTE: This is a guest post from Sarah Bedolfe, Coordinator of Marine Research for One World One Ocean. Last July, scientists happened upon a massive phytoplankton bloom in the Arctic, like none seen before. It covered 100 km (62 miles) and was dense enough to make the water green and murky — it contained four times as much phytoplankton as neighboring areas. One scientist said it was like “finding the Amazon rainforest in the middle of the Mojave Desert,” according to CNN.

“Suddenly, the fluorometer went nuts. We thought there was something wrong with the instrument,” Kevin Arrigo, leader of the study, was quoted in a Stanford News article, in regard to the fluorescence-measuring device used to estimate the algal content of water. The bloom shocked scientists because it was growing under thick sea ice, where sunlight is limited. You can support the efforts of One World One Ocean and their partners working to protect the Arctic here. Related Stories: Arctic melt releasing ancient methane. 20 May 2012Last updated at 12:54 ET By Richard Black Environment correspondent, BBC News. Réchauffement climatique - Quand le pergélisol… - Gaz de schiste :… - Copenhague :… - Charles… - Dérèglement… Twice as Much Methane Escaping Arctic Seafloor.