5 avril 2021 The quest to quantify the environmental cost of abandoned oil wells. This story is part of a collaboration with The Texas Observer, with support by the Pulitzer Center. 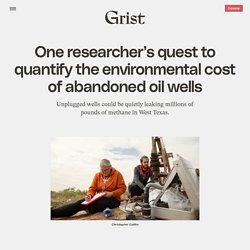 Amy Townsend-Small has been chasing methane her entire professional life. The quest has taken her from Southern California freeways to sewage plants to animal feedlots. Sniffing out the potent greenhouse gas, which traps 86 times as much heat as carbon dioxide after it’s emitted into the atmosphere, has required her to breathalyze cows and take chemical measurements at large manure lagoons. When fracking took off around 2010, Townsend-Small shifted her focus to a new and growing problem: methane leaks from oil and gas activity. Natural gas, which is primarily composed of methane, was pitched as a fuel that could transition the U.S. to renewable energy, since it burns more cleanly than coal and is naturally abundant — and, thanks to fracking, newly inexpensive to extract. Fracking wells released over 5 billion pounds of methane in one year. Being in close proximity to fracking operations could screw up your sexual health, cause developmental defects and cancer, induce seismic activity around you, and the list goes on. 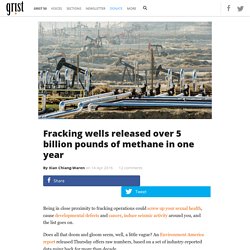 Does all that doom and gloom seem, well, a little vague? An Environment America report released Thursday offers raw numbers, based on a set of industry-reported data going back for more than decade. Tell President Obama and the EPA: Stop the worst methane leak in history. Can you imagine if, during the three months of the Gulf Oil spill, President Obama hadn’t spoken about it, and hadn’t done anything to stop it? 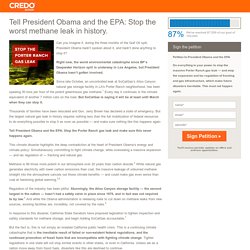 Right now, the worst environmental catastrophe since BP’s Deepwater Horizon spill is underway in Los Angeles, but President Obama hasn’t gotten involved. Since late October, an uncontrolled leak at SoCalGas’s Aliso Canyon natural gas storage facility in LA's Porter Ranch neighborhood, has been spewing 50 tons per hour of the potent greenhouse gas methane.1 Every day it continues is the climate equivalent of another 7 million cars on the road. But SoCalGas is saying it will be at least until March when they can stop it. Thousands of families have been relocated and Gov. Jerry Brown has declared a state of emergency. How the huge gas leak is turning California’s Porter Ranch into a ghost town. This story was originally published by Newsweek and is reproduced here as part of the Climate Desk collaboration. 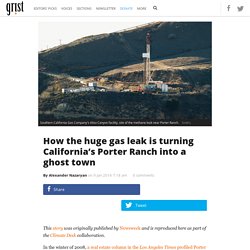 In the winter of 2008, a real estate column in the Los Angeles Times profiled Porter Ranch, a collection of subdivisions in the San Fernando Valley that feels utterly removed from the huge city on whose northern edge it lies. The neighborhood is “graced with lush parks,” the Neighborly Advice column gushed, and “attracts residents seeking sanctuary from the urban hubbub.” Toll Brothers, the upscale builder that has developed much of the land here, promises potential residents they will “relax in open, natural spaces and live within a true community.” Until very recently, you would have had to do a considerable amount of internet sleuthing to discover that Porter Ranch, home to 30,000 people, is not exactly the pristine, quasi-rural paradise promised by its developers and boosters.

Environmental Action Plug the Fracking Leaks EPA! Friends of the Earth. Methane is leaking out all over the damn place, thanks to the oil and gas industry. Methane, the second most common greenhouse gas emitted by the U.S., is a scary, scary thing. 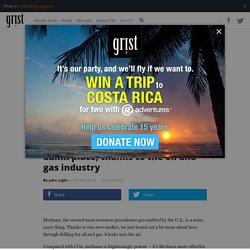 Thanks to two new studies, we just found out a bit more about how, through drilling for oil and gas, it leaks into the air. Bad News for Obama: Fracking May Be Worse Than Burning Coal. But he was able nonetheless to claim a victory of sorts. 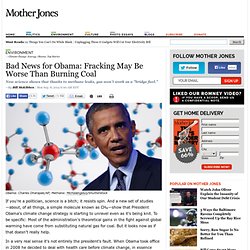 His accession to office coincided (coincidentally) with the widespread adoption of hydraulic fracking to drill for natural gas, resulting in a sudden boom in supplies and a rapid drop in price, to the point where gas began to supplant coal as the fuel of choice for American power plants. As a result (and as a result of the recession Obama also inherited), the nation's carbon dioxide emissions began to fall modestly. Frackers are flooding the atmosphere with climate-warming methane. The free pass that frackers and natural-gas handlers have gotten on their climate-changing methane emissions is really starting to stink to high hell. 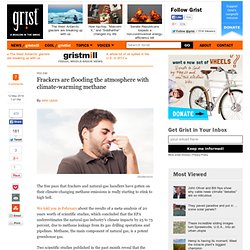 America’s natural gas system is super-leaky, and that’s bad news for the climate. EPA Significantly Underestimating Methane Gas From Fracking. A major new study blows up the whole notion of natural gas as a short-term bridge fuel to a carbon-free economy. 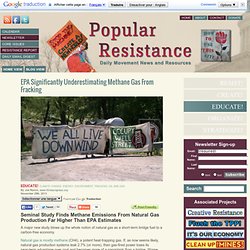 Natural gas is mostly methane (CH4), a potent heat-trapping gas. If, as now seems likely, natural gas production systems leak 2.7% (or more), then gas-fired power loses its near-term advantage over coal and becomes more of a gangplank than a bridge. Worse, without a carbon price, some gas displaces renewable energy, further undercutting any benefit it might have had.

Fifteen scientists from some of the leading institutions in the world — including Harvard, NOAA and Lawrence Berkeley National Lab — have published a seminal study, “Anthropogenic emissions of methane in the United States.” Crucially, it is based on “comprehensive atmospheric methane observations, extensive spatial datasets, and a high-resolution atmospheric transport model,” rather than the industry-provided numbers EPA uses. D’oh! How much larger? Gaz de schiste : des fuites de méthane plus importantes que prévu. The Intersection Between Hydraulic Fracturing and Climate Change: 6 min video. Methane leaks could negate climate benefits of US natural gas boom: report. There is also a growing body of evidence that the release of methane gas from well sites and pipelines is far higher than previously thought. 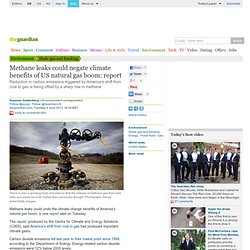 Photograph: Daniel Acker/Getty Images Methane leaks could undo the climate change benefits of America's natural gas boom, a new report said on Tuesday. The report, produced by the Centre for Climate and Energy Solutions (C2ES), said America's shift from coal to gas had produced important climate gains. Carbon dioxide emissions fell last year to their lowest point since 1994, according to the Department of Energy. Energy-related carbon dioxide emissions were 12% below 2005 levels. Emissions of Methane in U.S. Exceed Estimates, Study Finds. The analysis also said that methane discharges in Texas and Oklahoma, where oil and gas production was concentrated at the time, were 2.7 times greater than conventional estimates. 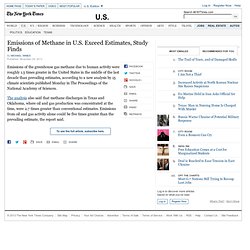 Emissions from oil and gas activity alone could be five times greater than the prevailing estimate, the report said. The study relies on nearly 12,700 measurements of atmospheric methane in 2007 and 2008. Colorado to crack down on methane emissions from fracking. Colorado health officials announced new rules on Monday that would work to cut the air pollution produced by oil and gas operations in the state. The rules would force companies to capture 95 percent of all toxic pollutants and volatile organic compounds they emit. In addition, the rules include a requirement that companies control emissions of the potent greenhouse gas methane, marking the first time a state has drafted rules to directly address the methane emitted by oil and gas operations, according to The Denver Post.

“These are going to amount to the very best air quality regulations in the country,” Gov. John Hickenlooper (D) said. Failure to account for “fugitive” methane gas could undercut BC's climate change efforts, experts say. A failure to account for “fugitive” gases released accidentally from gas wells and pipelines could have serious repercussions as oil and gas exploration heats up in British Columbia, experts say. Canada’s Pembina Institute is calling for more studies into “fugitive” methane leakage near gas production facilities in British Columbia following a recent study in the US that revealed substantial levels of escaping methane gas. “We have recommended that the issue of fugitive emissions from shale gas in Canada be studied more closely given the range of conclusions that are being drawn from U.S. studies,” Pembina Institute climate change program director Matt Horne said.