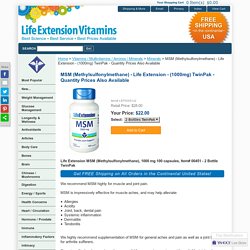 MSM is impressively effective for muscle aches, and may help alleviate: Allergies Acidity Joint, back, dental pain Systemic inflammation Dermatitis Tendonitis We highly recommend supplementation of MSM for general aches and pain as well as a joint lubricant for arthritis sufferers. Organic sulfur has been extremely successful for our customers in providing relief for joint and (fibromyalgia) muscle pain, indigestion and skin problems. We recommend taking between four and six grams per day. Methylsulfonylmethane - Scientific Review on Usage, Dosage, Side Effects. 1.1. 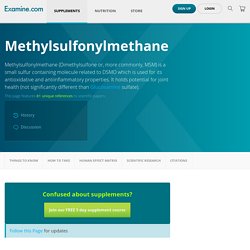 Sources Methylsulfonylmethane (MSM; also known as dimethyl sulfone or DMSO2[4]) is the oxidized form of dimethyl sulfoxide (DMSO), an organic sulfur compound from lignan[5] and naturally occurs in some green vegetables and other food products.[6] MSM is one of the more popular joint health supplements in the western world, behind both Glucosamine and Chondroitin[7][8] and similar to DMSO it is a potent solvent[9] and percutaneous absorption enhancer. Sources of MSM include (when available, quantity of the oxidized form of DMSO also included): Methylsulfonylmethane (MSM) appears to be a naturally occurring small sulfur containing molecule in a variety of food products, although the quantity in these food products is much less than that in supplementation and MSM from the diet is not likely to be a significant contributor 1.2. 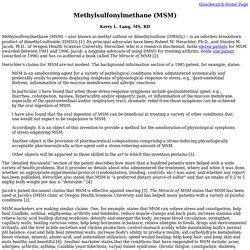 Lang, MS, RD Herschler's claims for MSM are not modest. The background information section of a 1985 patent, for example, states: MSM is an ameliorating agent for a variety of pathological conditions when administered systemically and preferably orally to persons displaying symptoms of physiological response to stress, e.g., gastrointestinal distress, inflammation of the mucous membranes and allergic reactions. The "detailed discussion" section of the patent describes how more than a hundred patients were helped with a wide variety of health problems.

Jacob's patent document claims that MSM is effective against snoring [5]. Are the Health Benefits of MSM Related to Sulfur? By Dr. 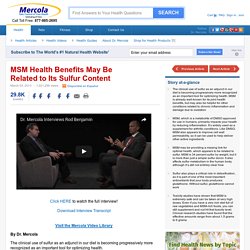 Mercola The clinical use of sulfur as an adjunct in our diet is becoming progressively more recognized as an important tool for optimizing health. Certainly, diet is the primary tool for reducing your risk for chronic degenerative diseases. But the practical question becomes, how do you obtain the needed sulfur from food grown in depleted soils? 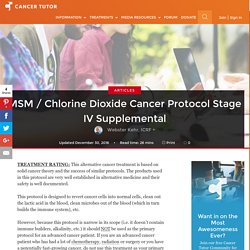 The products used in this protocol are very well established in alternative medicine and their safety is well documented. This protocol is designed to revert cancer cells into normal cells, clean out the lactic acid in the blood, clean microbes out of the blood (which in turn builds the immune system), etc. However, because this protocol is narrow in its scope (i.e. it doesn’t contain immune builders, alkalinity, etc.) it should NOT be used as the primary protocol for an advanced cancer patient.

Safety Notice #1: Do not take Organic Sulfur if you are taking high doses of aspirin or any type of blood thinner. Safety Notice #2: This protocol is synergistic with chemotherapy and makes chemotherapy more effective and less damaging. Safety Notice #3: Do not drink any form of tap water with this protocol, as tap water contains chlorine which can neutralize MSM. Tumors Dr. Produktinfo MSM EN. Msm information. MSM (Methyl Sulfonyl Methane) - Why it is Recommended. 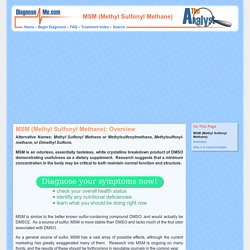 MSM is an odorless, essentially tasteless, white crystalline breakdown product of DMSO demonstrating usefulness as a dietary supplement. Research suggests that a minimum concentration in the body may be critical to both maintain normal function and structure. Diagnose your symptoms now! Check your overall health status identify any nutritional deficiencies learn what you should be doing right now MSM is similar to the better known sulfur-containing compound DMSO; and would actually be DMSO2. As a general source of sulfur, MSM has a vast array of possible effects, although the current marketing has greatly exaggerated many of them. At the Oregon Health Sciences University there have been many observations of what MSM can achieve in the way of health and well-being when taken as a dietary supplement. 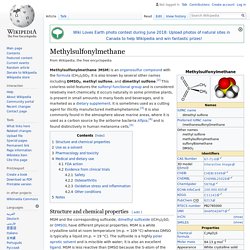 It is also known by several other names including DMSO2, methyl sulfone, and dimethyl sulfone.[2] This colorless solid features the sulfonyl functional group and is considered relatively inert chemically. It occurs naturally in some primitive plants, is present in small amounts in many foods and beverages, and is marketed as a dietary supplement. It is also commonly found in the atmosphere above marine areas, where it is used as a carbon source by the airborne bacteria Afipia,[3] and is found distinctively in human melanoma cells.[4] Structure and chemical properties[edit] MSM and the corresponding sulfoxide dimethyl sulfoxide ((CH3)2SO, DMSO) have different physical properties. 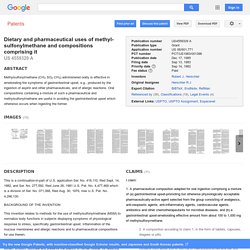 No. 418,110, filed Sept. 14, 1982, and Ser. No. 277,592, filed June 26, 1981 U.S. Pat. No. 4,477,469 which is a division of Ser. Aspirin and methylsulfonylmethane (MSM): a search for common mechanisms, with implications for... - Abstract - Europe PMC. The Anti-inflammatory Effects of Methylsulfonylmethane on Lipopolysaccharide-Induced Inflammatory Responses in Murine Macrophages.

Methylsulfonylmethane (MSM), also known as dimethyl sulfone and methyl sulfone, is an organic sulfur-containing compound that occurs naturally in a variety of fruits, vegetables, grains, and animals, including humans. 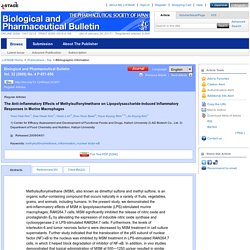 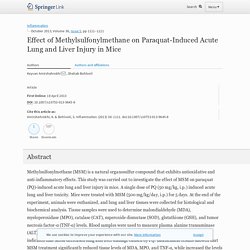 Toxicity of methylsulfonylmethane in rats. Abstract Methylsulfonylmethane (MSM) is a popular dietary supplement used in a variety of conditions including pain, inflammation, allergies, arthritis, parasitic infections and the maintenance of normal keratin levels in hair, skin and nails. Despite its popularity, there is little published toxicology data on MSM.