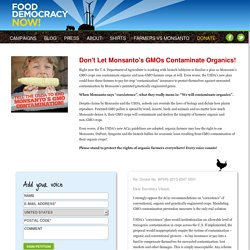 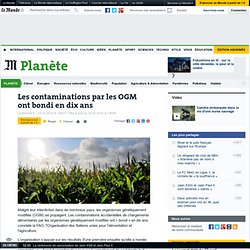 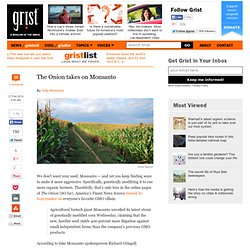 Specifically, genetically modifying it to sue more organic farmers. Thankfully, that’s only true in the online pages of The Onion (SO far). Hay contaminated with Monsanto GMOs rejected for export. Pity a Washington farmer who grew a crop of GMO-free alfalfa only to have it rejected for export — because tests showed it had been tainted by a genetically modified variety. 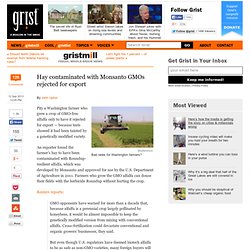 An exporter found the farmer’s hay to have been contaminated with Roundup-resilient alfalfa, which was developed by Monsanto and approved for use by the U.S. Department of Agriculture in 2011. Farmers who grow the GMO alfalfa can douse their fields with the herbicide Roundup without hurting the crop. Illegal Monsanto GMO wheat found in Oregon. A farmer in Oregon found a patch of wheat growing like a weed where it wasn’t expected, so the farmer sprayed it with the herbicide Roundup. 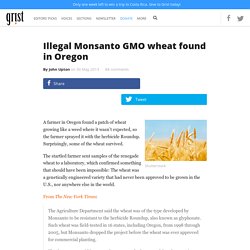 Surprisingly, some of the wheat survived. The startled farmer sent samples of the renegade wheat to a laboratory, which confirmed something that should have been impossible: The wheat was a genetically engineered variety that had never been approved to be grown in the U.S., nor anywhere else in the world. From The New York Times: The Agriculture Department said the wheat was of the type developed by Monsanto to be resistant to the herbicide Roundup, also known as glyphosate. 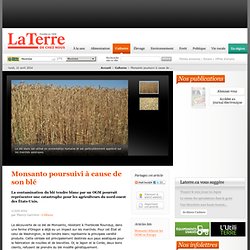 Monsanto is currently testing GMO wheat in two states. Last week, when the USDA announced that an unauthorized strain of GMO wheat was recently discovered on an Oregon farm, it was widely reported (by us, among others) that Monsanto had stopped field-testing its genetically modified wheat in 2005. 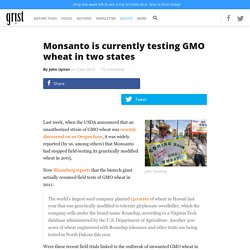 Now Bloomberg reports that the biotech giant actually resumed field tests of GMO wheat in 2011: The world’s largest seed company planted 150 acres of wheat in Hawaii last year that was genetically modified to tolerate glyphosate weedkiller, which the company sells under the brand name Roundup, according to a Virginia Tech database administered by the U.S. 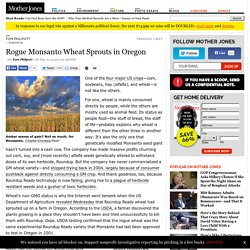 For one, wheat is mainly consumed directly by people, while the others are mostly used as animal feed. Its status as people food—the stuff of bread, the staff of life—probably explains why wheat is different from the other three in another way: It's also the only one that genetically modified Monsanto seed giant hasn't turned into a cash cow. The company has made massive profits churning out corn, soy, and (most recently) alfalfa seeds genetically altered to withstand doses of its own herbicide, Roundup.

Monsanto says opponents may be to blame for GMO wheat escape. A week after word got out that unapproved GMO wheat was found growing on an Oregon farm, Monsanto has announced the results of an internal investigation into the mysterious outbreak. 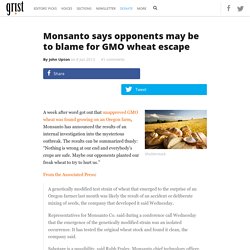 The results can be summarized thusly: “Nothing is wrong at our end and everybody’s crops are safe. Maybe our opponents planted our freak wheat to try to hurt us.” From the Associated Press: Japan and other nations say no to U.S. wheat, worried about GMOs. Japan cancelled a bid on 27,500 tons of Pacific Northwest wheat on Thursday — the first bite taken out of America’s wheat export market after a rogue genetically engineered strain was discovered growing like a weed on an Oregon farm. 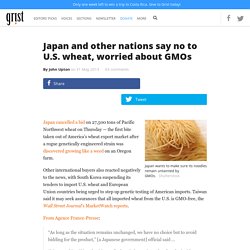 Other international buyers also reacted negatively to the news, with South Korea suspending its tenders to import U.S. wheat and European Union countries being urged to step up genetic testing of American imports. Taiwan said it may seek assurances that all imported wheat from the U.S. is GMO-free, the Wall Street Journal‘s MarketWatch reports.

From Agence France-Presse: “As long as the situation remains unchanged, we have no choice but to avoid bidding for the product,” [a Japanese government] official said … “We are asking US authorities to disclose information related to the incident as quickly as possible,” the official said. Frankensalmon could breed with trout, produce frankentrout. Interspecies hanky-panky is a thing, in case you didn’t know. Sometimes love, or perhaps a blindly primeval desire to reproduce, can lead one species of animal to breed with another. Think of a liger, for example — a hybrid of a lion and a tiger.